Corals are poster children for the harms of climate change, with vibrant reefs withered to bleached barrens as temperatures climb and waters become more acidic. Even as scientists work to restore reefs, they have long lacked stable cell lines for probing corals’ cellular and molecular workings. While cells can be isolated for a time, they inevitably fail to thrive. Establishing so-called immortal lines in the lab would allow researchers to investigate critical questions about why corals bleach, what mediates their symbiotic relationships with microalgae, and how they form their skeletons.

In search of a solution, a team of scientists in Japan, including comparative genomicist Noriyuki Satoh at the Okinawa Institute of Science and Technology, collected adults of the reef-building Acropora tenuis from around Okinawa and Ishigaki islands. Rather than isolate cells from these adults, the researchers induced the corals to spawn and produce planulae, tiny larvae roughly the size and shape of sprinkles on ice cream.

The reason for using planulae, Satoh says, is twofold: planular cells are primed to proliferate more readily than adult cells, and larval cells lack a microbiome. While coral-associated microalgae, viruses, fungi, and bacteria are essential for adult corals’ wellbeing, they can contaminate and take over cell lines. By starting with planulae, “we are very sure that the cultured cells originated from corals” rather than their associated microbes, Satoh says. 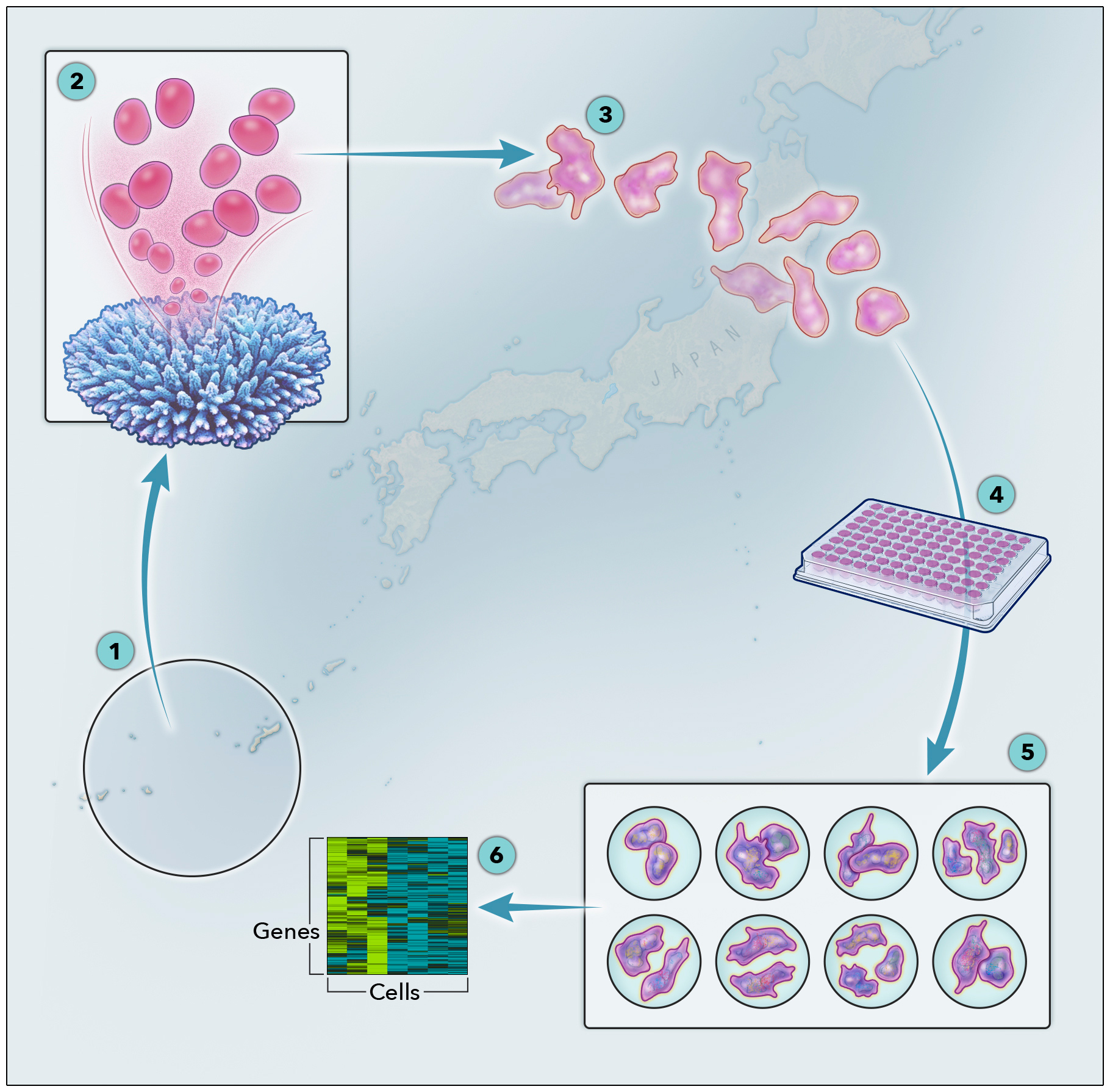 BUILDING BLOCKS: To isolate cell lines from the reef-building coral Acropora tenuis, researchers first collected adults from two islands in southern Japan (1). In the lab, the team induced the corals to spawn, creating fertilized larvae called planulae (2). Adding a chemical called plasmin to the planulae caused them to dissociate into individual cells (3), which were grown in a special culture medium that contains nutrients and other additives to help them thrive (4). The researchers isolated eight individual lines (5), including monoclonal lines made up of only one type of cell and polyclonal lines that contained multiple types of cells. Each cell type was characterized based on the genes it expressed (6), enabling researchers to match them to suspected corresponding types in adult corals, such as endodermal, skeletal, or neuronal precursors. WEB | PDF
© SCOTT LEIGHTON

Satoh’s group then passed the planulae to Kochi University molecular biologist Kaz Kawamura, an expert in marine organism cell cultures. Kawamura used a chemical to separate the larvae into single cells, and then spent roughly a year learning through trial and error what they needed to survive long-term, he tells The Scientist in an email. “The primary culture is relatively easy . . . but the stable line is very difficult.”

Kawamura found that adding an enzyme called plasmin to the cells kept them thriving in a special medium he previously designed while culturing other marine invertebrate species. From the dissociated larvae, the researchers isolated eight distinct lines, some monoclonal and some a mixture of cell types, and using molecular tools, they characterized each line by the genes it expressed. Within the lines, they identified cells with expression profiles similar to gastrodermal, neuronal, and epidermal cell precursors, among others.

“These research results are exciting,” Isabelle Domart-Coulon, a microbiologist at the Muséum National d’Histoire Naturelle in France who was not involved in this study, says in an email. “People will be interested . . . because of all the opportunities stable coral cell lines would bring for fundamental coral cell biology research.”

Since the initial paper about the culturing technique was submitted, Kawamura has described another 12 lines, each with unique properties, all of which can be frozen and sent to scientists around the world. Using one line with characteristics of endodermal cells—the outer layers of cells that host the coral’s microalgal symbionts—Satoh has begun introducing dinoflagellates to the culture to see whether the cells will incorporate them, a process that has never been studied at the single-cell level.

“We need to understand certain biological mechanisms better, and we all think that this is one of the ways to [do that],” Liza Roger, a marine biologist at Virginia Commonwealth University who was not involved in the work, says of the cell lines. “We have so much strong information to step up from now, it’s great.”