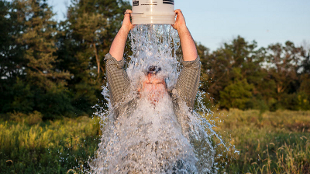 WIKIMEDIA, KIM QUINTANOWith hundreds of thousands of people dumping ice water over their heads and donating more than $100 million to the amyotrophic lateral sclerosis (ALS) organizations since mid-July, this summer has seen an unprecedented burst of ALS advocacy. To the patients and family members suffering from the paralyzing and eventually fatal neurodegenerative disease, the social media explosion that is the #IceBucketChallenge has offered a powerfully uplifting sense of support and accomplishment. To ALS researchers, the donations are perhaps equally uplifting—amounting to more than twice the National Institutes of Health’s recent annual budgets for the disease in less than two months.

“I really under-predicted where this would go,” said Jamie Heywood, cofounder and chairman of social networking site PatientsLikeMe and cofounder of the nonprofit research organization ALS TDI, which has received just over $3 million in donations during the last eight weeks as a result of the viral...

The vast majority of the funds have been donated to the ALS Association (ALSA), a national nonprofit organization with a mission to support ALS research and care for ALS patients and their families. The organization reported having received $106 million since July 29—$103 million more than it raised during the same time period last year. “The amount of money that’s going into the ALS Association is breathtaking,” said Michael McGrath, an ALS researcher at the University of California, San Francisco. “It’s the biggest bandwagon in America for people to jump onto, which is terrific.”

But with such a massive influx of funds, the ALSA finds itself in the spotlight, while scrambling to organize the donations and respond to questions about how the money will be doled out. “It’s $100 million dollars; with that money comes tremendous responsibility,” ALSA spokesperson Carrie Munk told The Scientist.

Last year, 28 percent of the organization’s expenses were dedicated to research, with 19 percent going to patient and community services. Some in the patient community have voiced their wishes that most of the new funds be dedicated to research, arguing that this was the donors’ intended use of the money. A letter drafted by a group of ALS patients and caretakers sent to the ALSA (and The Scientist) asked the association to allocate a significant portion of the recent donations to ALS TDI; a separate petition with 1,176 signatures asks ALSA to spend at least 75 percent of the new funds on research.

In response to the sudden and unexpected influx of cash and the questions that followed, the ALSA added a checkbox to its donation page that allowed the money to be earmarked for research. The association also devised a solution for anyone who has already donated and would like to retrospectively restrict the use of that money. Munk said ALSA has received e-mails of this nature, although she couldn’t say how many. She did note that not all who’ve written requested that the money be put toward research. Some, Munk said, have requested that “100 percent go to patient services,” while others “are saying 50:50.” Still others have earmarked their donations to support public policy efforts, she said.

“We’ll honor whatever the intent is of the particular donor,” said Munk, who emphasized that the new money won’t necessarily be broken down the same way last year’s budget was distributed. “Right now, we absolutely hear the ALS community on the importance of funding research,” she said. On this broad scale, “we expect to announce publicly how we intend to use the funds in the coming weeks.”

Funding earmarked for research will be doled out following the ALSA’s traditional, peer-reviewed grant selection process, Munk said. For money that is not designated for one purpose or another, the association will consider input from its board of representatives, as well as the ALS community and the association’s individual chapters, with the ultimate decision made by the ALSA board of trustees. Munk said the money will likely be dedicated to both research and patient-centric causes, noting that “it’s not an either/or scenario; there is overlap [between research] and the people living with the disease.”

Just to keep running, for example, the average ALS clinic depends on funding from organizations like the ALSA. Assessing an ALS patient’s disease progression often takes many different specialists, from neurologists to nutritionists, and their time is costly. “There’s no way you could go to a business manager and say ‘I need seven therapists to spend an entire day with me’—[that’s] never going to fly. Almost every clinic that wants to have all these different therapists has to get outside funding,” said Richard Bedlack, director of the Duke ALS Clinic, which he said is almost entirely funded by the ALSA. Funds dedicated to patient care and advocacy have also proven more productive than searches for treatments or cures, he said. “You could easily say that the money that’s been spent on patient care and to facilitate advocacy has generated more deliverables than the money that has been spent on research.”

Still, Bedlack agrees that investments in ALS drug development are important. “If I was sitting here with ALS, I would probably want a greater percentage of the money put into super high-risk research,” he said. “I understand that perspective.”

ALS researchers are, of course, already thinking about how the money could best be used. Bedlack encouraged investment in basic research. “We still don’t know what causes sporadic ALS, which is what most people have. . . . I would hate to see $100 million [put] into ideas that we have today based on this very murky concept of what’s causing sporadic ALS.”

Others argued for a structured translational approach. As timing would have it, ALS clinician-researcher Jeff Rothstein of Johns Hopkins School of Medicine and the Robert Packard Center for ALS Research—which as a result of the viral charity campaign received $200,000 to $300,000 in donations last month, about 10 to 15 times the amount received in August 2013—and colleagues had recently mapped out a plan with ALSA and nonprofit Team Gleason to build induced pluripotent stem cell (iPSC) lines from at least 1,000 ALS patients. The researchers hope to examine the cells for genomic and epigenetic changes and use them to perform personalized drug screens. Eventually, Rothstein hopes, the work will allow them to subdivide the patients into subgroups that might be more likely to respond to certain treatments. Of course, such an approach is not cheap, and when the collaboration formed earlier this year, funding was the missing component. The Ice Bucket Challenge donations could be the answer. “I have talked to ALSA,” Rothstein said. “I assure you, they’re in the middle of making decisions.”

Rothstein cautioned funders not to spend all their new money right away. “Most research doesn’t go for only two years,” he said. “So any program that invests money has to be cognizant [of that]. . . . When that money [runs] out, what happens?”

With discussions about the spending of the Ice Bucket Challenge donations ongoing—within ALS organizations that have received an influx of funds, as well as online, among patients, caretakers, and the public—many questions remain. Even once they’re answered, there will likely be critics who disagree with the outcome, Bedlack predicted. “No matter what is done with this money, there are going to be people who are unhappy.”

But one thing everyone can agree on is the positive impact of the unrivaled exposure that this neurodegenerative disease has just has received. “I’m so proud of the ALS community and the individual patients who thought of this,” said McGrath. “To have America get behind them, and do this in a giving way, I think it’s incredibly exciting. It raises awareness in a very humanistic way.”

Rothstein said he hopes that the Ice Bucket Challenge represents something even bigger than its impacts on the ALS community—a successful new medium for disease advocacy. He pointed to the yellow Livestrong bands that people purchased and wore in support of cyclist Lance Armstrong and others fighting cancer. “Now you see many, many, many organizations will make those bands for their own cause. So we’ll have an ‘Ice Bucket Challenge’ for many other diseases over time. It won’t be an ice bucket . . . but it will still be the same flavor,” he said. “And that’s good. It’s good for people to understand the maladies we face and have a compassion for them.”

Correction (September 3): This story has been updated from its original version to correctly reflect that Jeff Rothstein of the Robert Packard Center for ALS Research, not Michael McGrath, is planning a collaboration with ALSA and Team Gleason to create iPSC lines from ALS patients. The Scientist regrets the error.