Labs around the world have been closed for weeks, months in some places, as orders to shelter in place and maintain physical distancing seek to minimize the spread of COVID-19. While some scientists have turned to writing manuscripts and grants and making inventories of their freezers to keep busy while away from the bench, others have brought experiments home, turning bathrooms, laundry rooms, and kitchens into makeshift labs—sometimes seeing an opportunity to explore new questions, other times trying out of desperation to prevent projects from moving backwards.

Spectrometry in the spare room 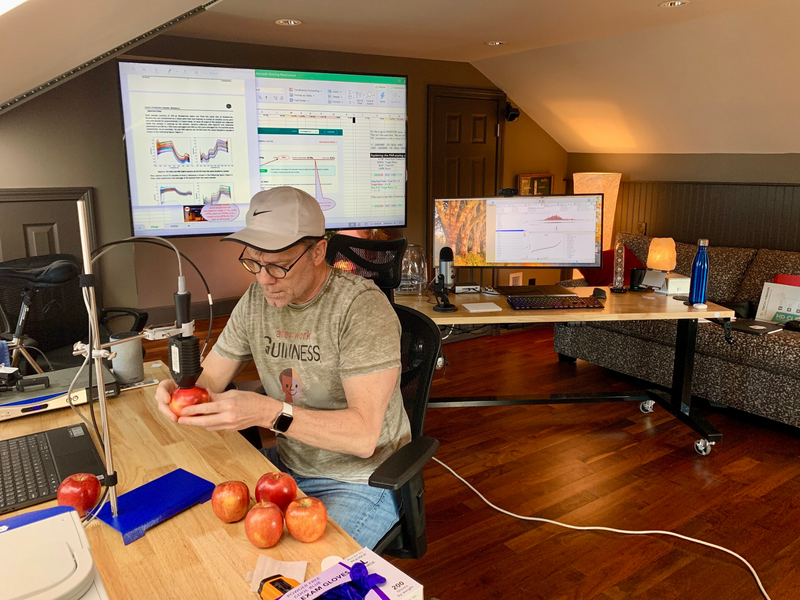 Researchers at TeakOrigin, a food-data company, created an entire initiative dubbed “lab@home.” Under normal circumstances, the company purchases thousands of fruits and vegetables from different grocers in Boston and Los Angeles and scans each piece using optical spectrometers designed to detect levels of different vitamins and nutrients. The team publishes data comparing the quality of fruits and vegetables found in each store each week online for consumers to access for free. It also partners with companies in the food supply chain to help improve the quality of the food they produce. After the analyses are done, they donate the food.

Brent Overcash, the cofounder and CEO of TeakOrigin, tells The Scientist those studies stopped in March out of an abundance of caution. “We didn’t feel good buying so much food that we normally buy in an environment where we might have scarcity,” he says.

But produce quality is just one of the company’s research projects. The spectrometers the scientists use are designed so that they can be carried into the field and used on fruits and vegetables that haven’t even been picked yet, so they can learn about the ideal times to harvest. “I can put the device on [the food,] pull the trigger, and in 30 seconds get an answer,” says Overcash. That portability has allowed his employees to turn lemons into lemonade.

Now, instead of testing huge quantities of foods, the scientists are using the scanners at home to conduct replicate analyses on smaller quantities of produce over the course of several days to see how their nutrients degrade over time. For example, strawberries may have more vitamin C than tomatoes to begin with, but as they’re waiting to be eaten, the tomatoes may end up with more.  “You learn something entirely different by scanning the same thing over and over and over, over the course of a number of days,” he says.

A washer, a dryer, a thermocyler 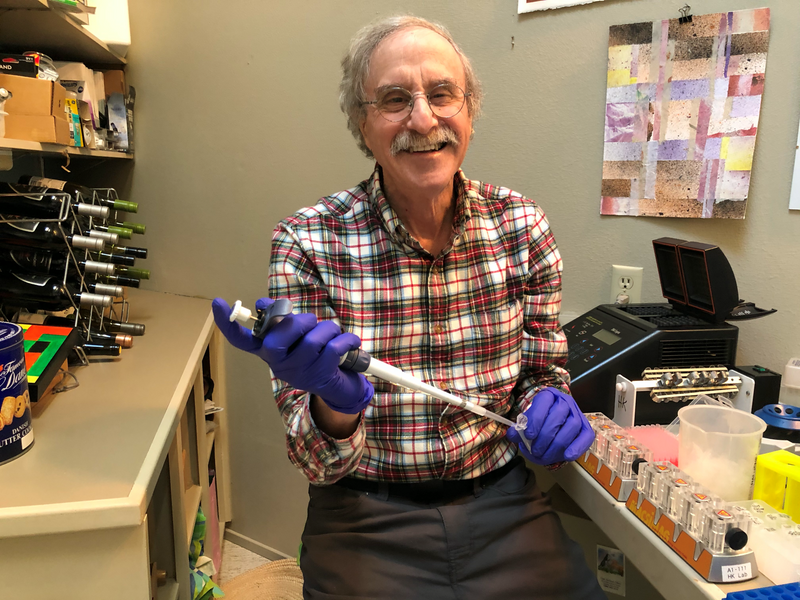 Steven Henikoff, who studies epigenetics at the Fred Hutchinson Cancer Research Center, and his team were almost ready to release an updated protocol that allowed researchers to profile chromatin components using antibodies—which can reveal changes to gene expression—in a small sample or cell, using a technique that kept the sample in a single tube throughout the process, but they needed a little bit more data.

When COVID-19 prevented Henikoff from continuing experiments in the lab to collect those results, he took a few pieces of equipment home to see if the technique, CUT&Tag, would work just as well outside of a dedicated laboratory—in this case, the laundry room of his home.

“It doesn't require anything dangerous,” says Henikoff. “I thought, well, I’ll just try it out at home and see if I can get the same data, the quality, that I was getting the lab. And it turned out to be quite easy.”

He took a 10-year-old PCR machine and a microcentrifuge home from the lab, both of which fit on the counter he uses to fold clothes. He was able to run even more samples than he normally would in the lab, thanks to limited interruptions throughout the day, and his team posted its Cut&Tag@home protocol to protocols.io on April 17.

“The reason for doing it was, basically, it’s a good opportunity to demonstrate what you could do with limited resources,” says Henikoff. “It’s very inexpensive. It lowers the barrier for getting into the game of chromatin profiling.” 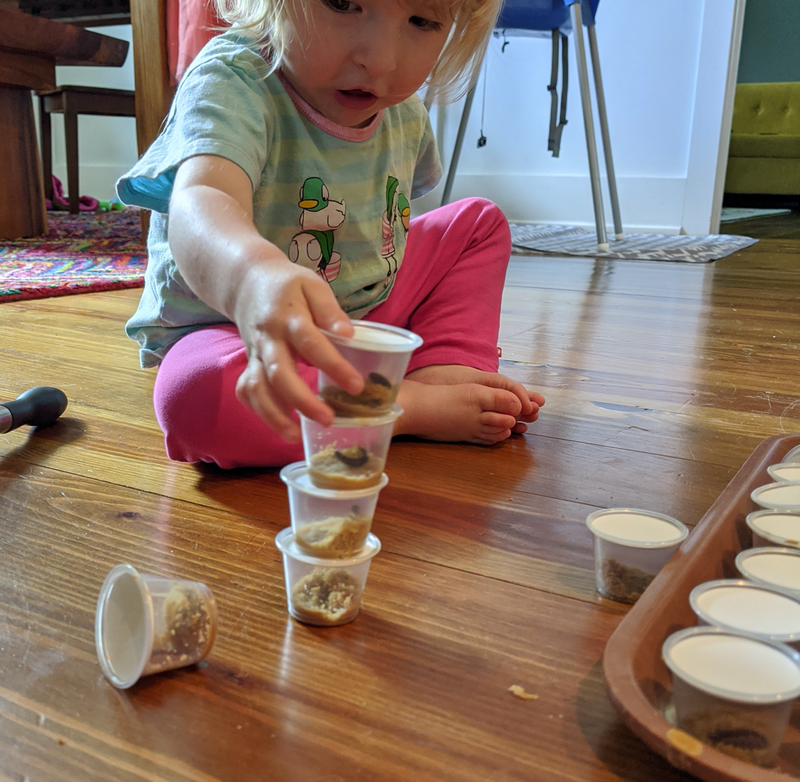 Hannah Burrack, an entomologist at North Carolina State University, works with a variety of insects that require care several times per week. Because her colonies contain animals that can be collected in North Carolina, they were not considered unrecoverable resources, meaning that as the university shut down to limit the spread of COVID-19, her team would not be able to enter the lab to maintain them.

But building new colonies isn’t as simple as just collecting new specimens from nature. They’d need to wait for the best season to collect them, and then maintain and grow the colonies in the lab for a year or longer before they’re ready for experiments, delaying not only her own work, but the projects of graduate students hoping to finish their dissertation experiments this year.

So Burrack and her lab manager each brought two colonies home, says Burrack, who is keeping them in an extra bathroom. If she were running experiments, it would be crucial to carefully control the temperature and humidity, but since she’s just keeping the insects alive, those that need extra humidity are placed over pans of water, and she doesn’t worry much about the temperature. “Neither of them are at their ideal temperature right now,” she says, referring to the tobacco budworm caterpillars and spotted wing Drosophila living in her shower. “Because we’re not running experiments where environmental conditions are going to be a mitigating factor, I’m not concerned about it. They’re reproducing and surviving just fine.”

While Burrack’s lab had colonies of seven different insects, she and her lab manager only brought home the four associated with graduate student research and left the rest behind. “Any other projects we’re basically deemphasizing for the rest of the year, because if we’re able to get back in, we want to make sure our students can make adequate progress and satisfy the requirements of the grants that are funding them,” she says.

Even with a pared-down number of subjects, it’s a lot of work. Normally, Burrack would pay an undergraduate student to spend 15 hours a week maintaining the colonies. “This isn’t something I wanted to burden our students with because they were in the middle of transitioning to taking online courses or teaching online courses, and also had a lot of personal anxiety and concern about how their degree program was going to progress,” she says, but “the time and energy that I’m spending with just basic insect husbandry is time that I’m not able to spend writing, doing research.”

Henikoff echoed the sentiment. While he’s happy with his results, “it wasn’t like I was looking for stuff to do at home. . . . I’m running a lab and doing grant reviews,” he says. “I just wanted to get something accomplished that I couldn’t do otherwise during the COVID-19.”