ABOVE: Hora Rockshelter in Malawi, where recent excavations uncovered two of the individuals analyzed in the new study JACOB DAVIS

Ancient DNA dating to between 16,000–18,000 years ago—the oldest human DNA to be extracted in Africa so far—reveals that populations of hunter-gatherers mixed and mingled 50,000 to 20,000 years ago, moving long distances across the continent. This supports the idea that demographic changes played a role in the transition from the Middle to the Later Stone Age, a time when new types of tools emerged and information was exchanged over long distances, a study published today (February 23) in Nature reports.

“This is a very exciting paper because it shows that it is possible to extract ancient human DNA from samples of human bone and teeth from Africa dating back to the last 20,000 years. What is equally exciting is that the authors have managed to obtain genomewide data, which means nuclear DNA, the highly informative section of our genome,” Tom Higham, an archaeologist at the University of Vienna in Austria who was not involved in the study, tells The Scientist in an email. “This has allowed them to explore much more ancient evidence for relatedness and admixture among populations dating back to around 80,000 years.”

While the first complete Neanderthal mitochondrial genome was sequenced in 2008 from a 38,000 year-old individual excavated from Vindija Cave, Croatia, scientists only recovered the first DNA from human fossils in Africa in 2015. “It’s really hard to get DNA out of the tropics, because heat and moisture kill DNA,” Elizabeth Sawchuk, a bioarchaeologist at the University of Alberta and co-lead author of the new study, tells The Scientist. And researchers have been limited in how much they can learn about the past by sequencing the DNA of modern humans, because in the last 5,000 years, the spread of hunting and farming, the enslavement of African people, and colonization wrought dramatic demographic changes. “It completely obscured the ancient genetic variation,” says Sawchuk. In the new study, she adds, “we wanted to see what the genetic landscape in Africa looked like before the rollercoaster of the last 5,000 years, but we didn’t have much ancient DNA from that time period.”

We wanted to see what the genetic landscape in Africa looked like before the rollercoaster of the last 5,000 years, but we didn’t have much ancient DNA from that time period.

The study presents genome-wide data from three individuals living in the Late Pleistocene, the period between 120,000 and 12,000 years ago. The oldest individual, who lived in what is now Mlambalasi in Tanzania about 18,000 years ago, was excavated by Sawchuk in 2010, and the other two Pleistocene individuals were excavated by coauthor Jessica Thompson, an anthropologist at Yale University, in Malawi in 2019. These are the first ancient DNA samples from sub-Saharan Africa that date to this period. The researchers also analyzed the genomes of three people who lived in the Holocene, the period that began about 12,000 years ago. Two of those individuals had been excavated earlier and stored in museums, and one genome came from a pinky finger bone Thompson excavated in Malawi in 2016.

DNA extraction was done in the lab of David Reich, an ancient DNA specialist at Harvard University. One contributing factor for why DNA was recovered from such an old specimen, says Sawchuk, was this collaboration, in which experts in ancient DNA were “working directly with the people who are were at the archaeological site who can minimize contamination at the beginning and understand the archaeology really well.” A further reason might be that all six newly sequenced individuals were excavated from caves and rock shelters, she adds. “It’s becoming pretty apparent to us that DNA preserved better in some situations archaeologically than others.” Higham comments that “This paper really shows the way in terms of technical ability to extract demonstrably ancient genomewide data from very ancient samples.”

These genomes shed light onto what was going on in Africa even earlier than the sequenced individuals lived—around 80,000–50,000 years ago. “Each [individual] is a product of all their ancestors and their ancestors’ ancestors, so there are actually thousands and thousands of people’s genetic remnants in a single individual, if you can get high-quality data,” Thompson tells The Scientist.

This allowed the researchers to delve into longstanding questions. For example, at about 50,000 years ago, a change in the archaeological record is seen, which remained “a decades-long mystery in African archaeology,” according to Sawchuk. “We could see archaeologically that people had started creating what we thought were long-distance trade networks.” For instance, obsidian, a type of stone particularly suited for making tools, was moved over long distances. “We can look at the chemistry and see that [the stones] have moved. The question has always been: were humans moving with them?”

The researchers looked at the ancestry of the six newly sequenced individuals and 28 other individuals who had lived between 8,000 and 400 years ago in various parts of sub-Saharan Africa and whose genetic data had previously been published. Surprisingly, all 34 individuals were descended from the same three genetic lineages from eastern, southern, and central Africa. “The fact that all of these individuals are descended from the same three lines suggests that in the past, we had this big period of mixing and moving,” explains Sawchuk. “It was a tens of thousands of years process that involved many, many people moving over many, many generations­—it was a transformation in the way that hunter-gatherers were living in Africa.”

Based on the genetics, the authors conclude that “this wasn’t just things moving, this was people moving long distances, taking eastern African ancestry all the way to the tip of South Africa, southern African ancestry to Ethiopia, and then central African ancestry throughout,” Sawchuk says. The only way this can be explained, she adds, is that people were moving long distances and finding partners far away from their birthplaces, creating what she calls “globalization,” and changing the genetic landscape. “We would have never seen this without DNA.” 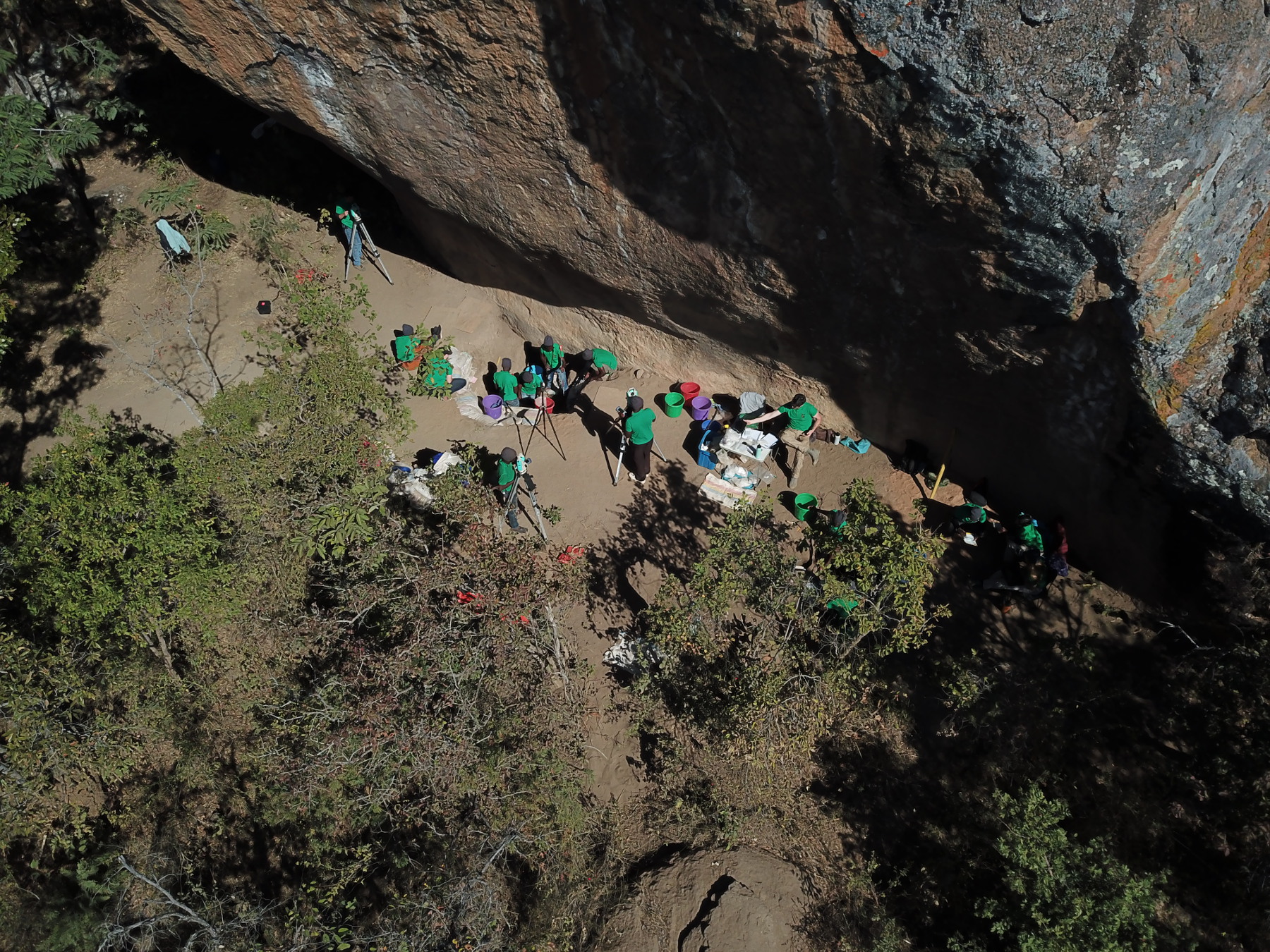 “The study is really astonishing because it offers additional insights on demographic processes of the Late Pleistocene to Holocene in Africa and adds further support to previous studies using genetic, bioarchaeological, and linguistic evidence,” writes Cesar Fortes-Lima, a population geneticist at Uppsala University, Sweden, who was not involved in the study, in an email. “This past regional connectivity was previously described by linguists studying languages known as ‘click’ languages that are still used today by modern-day African hunter-gatherers groups. Linguistic research of those groups suggested longer-distance ties between eastern and southern Africa.”

By the time the oldest sequenced individuals lived, about 18,000 years ago, this widespread flux of people across the continent had come to a halt. This is evident in their genomes, as the individuals included in the study were most genetically like their geographic neighbors, which indicates that for generations before them, people had been settled down and were choosing mates regionally. “We see that they share this broad regional three-component ancestry, but also have more specifically local relationships with their nearest neighbors,” Thompson writes in an email.

“It’s fascinating that increased regionalisation of populations could have appeared hand in hand with an increased focus on symbolic material culture such as beads, which may have become critical to mediate both local and distant social relationships within the Later Stone Age,” James Blinkhorn, an archaeologist at the Max Planck Institute for the Science of Human History in Germany, who was not involved in the work, tells The Scientist in an email. “The rich fossil record of eastern Africa is a persistent draw to palaeoanthropologists, but this study also underscores the importance of forested regions of the continent, such as Central or West Africa, to understand patterns of population interactions in some of the most recent phases of human evolution, as well as how they have laid the foundations for the world around us today.”

“This is a very important study that reaffirms patterns we find from ancient DNA research in Europe and Asia, that what we thought were long lasting and settled populations in fact have unexpectedly complex and dynamic roots,” Chris Stringer, a paleoanthropologist at the Natural History Museum in London who was not involved in the work, tells The Scientist in an email.

For John Hawks, an anthropologist at University of Wisconsin-Madison who was not involved in the work, there is still a lot to learn, he tells The Scientist in an email. “The current sample of ancient genomes in Africa is still very small, and the individuals come from only a few small parts of the continent. It also only represents the last short slice of time. I think that when we have samples from earlier times, we may find that the scenario outlined in this paper is still too simple.“

Studying ancient DNA in the context of archaeological and linguistic findings opened a new window onto how ancient populations lived. This leaves Sawchuk asking: “What are we missing from even earlier? What other stories in human history have just been completely changed by our modern world?”