Creatures from migratory eels and other fish species to insects to birds tap into the Earth’s magnetic field to navigate, sometimes many thousands of miles. But so far, evidence has been scant for any such magnetic sense in humans. Now, research suggests that some people do indeed perceive magnetic fields, albeit unconsciously. In response to a changing magnetic field, so-called alpha brainwaves, the background “hum” of the brain, quieted in human volunteers, scientists reported yesterday (March 18) in eNeuro.

“This is the first very clear evidence and strong evidence for the ability of human beings to detect and transduce the earth’s magnetic field,” says Eric Warrant, a neuroethologist at Lund University in Sweden who was not part of the work. “It’s extremely carefully controlled,” notes Warrant, as the authors methodically monitored for confounding effects and potential sources of artifacts.

In the past, researchers...

In the new study, scientists from Caltech and collaborators went beyond probing behavior by using EEG to watch the brain’s response to a changing magnetic field. The researchers built a cube that shielded unwanted electromagnetic radiation. There, the study’s participants sat alone in darkness and quiet for an hour, wearing EEG caps that allowed the scientists to eavesdrop on their brains as they manipulated the magnetic field in the cube.

The experimental conditions mimic how a person might typically experience the Earth’s magnetic field, says Issac Hilburn, a researcher at Caltech and one of the papers authors. The laboratory field was similar in strength to the Earth’s and the researchers moved it slowly to simulate how the field would change when turning one’s head.

“If we don’t have it, we would need to explain why we lost it. . . . What we’re saying in this particular paper is we haven’t lost it.”

For some patterns of magnetic field motion, the researchers noticed a dip in the amplitude of their participants’ brains’ alpha-band oscillations, or alpha waves, which have a frequency of about 8 to 13 hertz. Alpha waves are always present, but are more prominent when at rest. “You can think of [the alpha waves] as a measure of how engaged or unengaged the population of neurons in the human brain are with tasks,” Hilburn explains.

When the field was downward oriented and swept counterclockwise, the scientists observed a significant decrease in the alpha wave amplitude when they pooled the data from 26 subjects for analysis. In some people, the amplitude of their brain’s rhythm dropped by up to 60 percent over hundreds of milliseconds before returning to normal. “I was just blown away. I didn’t think we’d ever find anything this clear cut and quantifiable and reproducible,” says Hilburn, who admits he was somewhat skeptical at the project’s outset.

Study coauthor Joseph Kirschvink, a geobiologist at Caltech, interprets the dip in the alpha waves as the brain “freaking out” upon realizing that the magnetic field has moved while the body didn’t. But not all conditions elicited the change.

When the researchers moved the field while it was oriented up—opposite the relevant orientation for the northern hemisphere where the experiments took place—they didn’t observe a drop-off in the alpha waves. Nor did they see a response when the field was pointed down and rotated clockwise. “We don’t know why that is,” says Winklhofer, but notes that since this motion doesn’t trigger the shift in brainwaves like its opposite, “it’s most unlikely to represent an artifact” produced by the electronics. 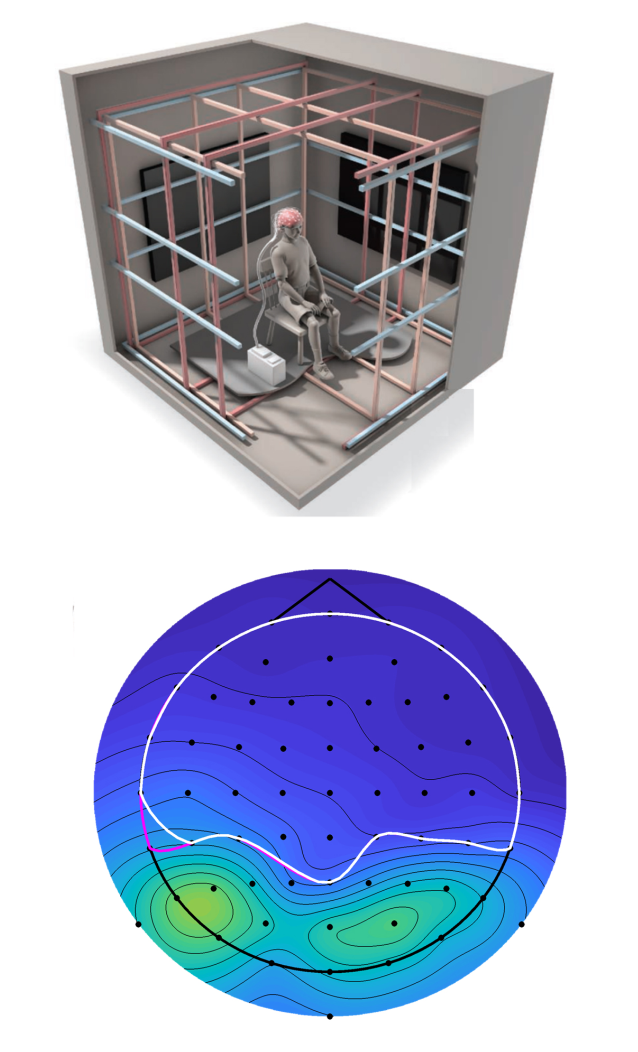 A schematic of the experimental chamber (top) shows how a volunteer would sit and experience an applied magnetic field. The participant wears an EEG cap to monitor the brain’s response (example, bottom). Deep blue color reflects a strong change in alpha wave activity, while green and yellow are less strong changes, as found by 64 electrodes positioned across the head.
WANG, ET AL., ENEURO

“The sense is there,” says Kirschvink. The question is, how does it work? “It demands that there are receptor cells, most likely with little crystals of magnetite in them conveying this information to the brain,” he says. Because the polarity of the field mattered, the results rule out other mechanisms such as electrical induction or a so-called quantum compass, by which molecules excited by light interact with the Earth’s magnetic field, according to the authors.

See “A Panoply of Animal Senses”

It makes sense, as magnetic sensory systems seem to occur in virtually all organisms, says Kirschvink. “If we don’t have it, we would need to explain why we lost it. . . . What we’re saying in this particular paper is we haven’t lost it.”

And perhaps there are cultures today in which people haven’t entirely lost touch with a magneto-sense. Both Winklhofer and Kirschvink point to Aboriginal peoples in Australia who are known for their ability to orient in the desert and whose language references cardinal directions (North, South, East, and West) rather than relative ones (right, left, forward, and backward). “It would be super interesting if these cultures have a magnetic sense which is not so deeply buried,” says Winklhofer, who has collaborated with Kirschvink in the past.

The authors acknowledge that their results will be controversial, especially in the realm of neuroscience. But that’s why other independent groups should try to replicate their results, they say.

To ensure against cherry picking their results, the scientists automated their workflow for data analysis. For controls, the scientists used sham exposures that lacked their applied magnetic field while still flowing electricity through the coils that usually generate the field to create any heat or noise the coils would ordinarily produce. These controls didn’t prompt a significant change in participants’ alpha waves. “With regards to the experimental paradigm, it’s a tour de force of rigor and of experimental clarity,” says Warrant.

Moreover, Kirschvink and his colleagues say they have already replicated the field-sensing effects through similar tests with volunteers in Japan and will report them in a future paper. The team is now looking for telltale behavioral signs, for instance reflexive eye movements, that could further confirm that humans sense the magnetic field. “If we can find something along those lines, [that would] probably establish human magnetoreception on a whole other level,” says Connie Wang, one of the paper’s authors and a PhD student at Caltech in the lab of Shinsuke Shimojo.

There’s still a lot of work to do probe the magnetic sense and figure out its biology. “My feeling is this is just the tip of the iceberg,” says Kirschvink. But his sense is that “the brain is evolved over half a billion years to pull out information from the magnetic field just like any other sensory system.”