ABOVE: An artist’s rendering of the Dragon Man, Homo longi, a proposed new species found in China
CHUANG ZHAO

A trio of papers, published today (June 25) in The Innovation, makes the case for a new species of Homo, H. longi, or the “Dragon Man,” that would replace Neanderthals as modern humans’ closest relative.

The single cranium used to describe the species—the largest of any hominin and remarkably well-preserved for being at least 146,000 years old—has a murky history that some experts say limits what conclusions can be drawn about it, but it does add to anthropologists’ understanding of human evolution in Asia during the latter half of the middle Pleistocene, an important period in human expansion.

“We got such an amazing, complete cranium, and it provided very important information for us to understand the evolution of Homo as a genus,” says Xijun Ni, a paleoanthropologist at the Chinese Academy of Sciences and a coauthor of all three studies. “Previously, we thought the Neanderthal is the sister lineage of H. sapiens, but now we find that Homo longi and other members of this lineage are actually closer to Homo sapiens than Neanderthals are.”

The first paper describes the history and features of the skull, known as the Harbin cranium, which was donated to the Geoscience Museum at China’s Hebei GEO University in 2018. What happened before that is speculative, but Ni tells The Scientist that the leading story is that the cranium was first discovered in 1933 by a Chinese laborer under contract with occupying Japanese soldiers during the World War II. Japanese troops were overseeing the construction of a bridge over the Songhua River, part of a river system known as the Lóng Jiāng, or Dragon River, near Harbin City in northern China, when the worker discovered the skull. He secreted it away, hiding it in an abandoned well, where it remained for roughly 90 years. It was only shortly before his death in 2018 that he revealed the secret to his family, who recovered the fossil and offered it to the museum for study.

Almost none of this story can be independently verified, and the paucity of detail, especially where the skull was found, makes it difficult to draw firm conclusions on everything from the fossil’s age to its relationship to other specimens in China, according to Michael Petraglia, a professor of human evolution and prehistory at the Max Planck Institute for the Science of Human History, who wasn’t involved in the study. “Context is primary. It’s a big problem, actually, to find a fossil, any kind of fossil, without context,” he says, adding, “I do think that they’ve done the best they can given the circumstances that they have.”

Regardless of its origins, the Harbin cranium is decidedly odd, with what Ni calls “a mosaic combination of primitive and derived features.” The most striking thing about it is its size: the cranium is the largest of any Homo fossil ever found, and the skull has an internal volume of 1,420 milliliters, falling within the range of H. sapiens and Neanderthals, but much larger than other species such as H. erectus, H. naledi, or H. floresiensis. The shape and profile of its head looks similar to the skull of a modern man, but the thick, robust brow ridges feel ancient, Ni says. And while the skull lacks a mandible, it does contain one large tooth.

Based on the skull’s size and the specifics of certain features, Ni and his colleagues tentatively identified the specimen as male. Using standards based on H. sapiens, they also attempted to determine how old he was when he died. As modern humans age, the plates of their skull fuse together, while young humans will still have visible suture lines. The Harbin skull has almost no sutures, leading the team to speculate that he may have been as old as 50. However, the lack of wear on the one tooth suggests he could have been younger.

To fill in some of the cranium’s missing history, the team published a second paper detailing attempts to date the skull and definitively link it to the Harbin region. To achieve this, they used uranium-series dating to determine the age of the skull and nondestructive X-ray fluorescence, rare earth element tracing, and strontium isotope analysis to compare the cranium to other mammalian and human fossils recovered from the area. The researchers also took a sediment core from near the site of the bridge in Harbin City, comparing the strontium isotope ratios in the different layers to grains scraped from inside the skull’s nasal cavity.

The results date the cranium at roughly 146,000 years old, within the range of the middle Pleistocene, although it could still be much older, as uranium dating can only provide a minimum age. Fossils taken from Pleistocene-era sediments all produced patterns similar to the cranium during the X-ray fluorescence and rare earth element analyses, and the strontium isotope ratios were also consistent and fell within the range of values derived from Harbin sediments, suggesting the fossils could have shared a common geologic environment. The grains from the nasal cavity most closely matched a layer of riverine sediments, but the researchers weren’t able to definitively link the cranium to a particular layer. Even still, Ni says, “We’re comfortable with our result. There is no technology that can pin a fossil to just one point, but so far, we think it’s safe to say it’s from the Harbin area.”

Despite Ni’s confidence, debate over whether the Harbin cranium truly represents a new species, and if its age and location are reliable, has already started. Petraglia, for example, says he doesn’t think assigning a minimum age is very useful, and he remains skeptical about whether the handful of fossils used to geolocate the cranium—between six and nine, depending on the experiment—is enough. “I would say its acceptance for me hinges on proving more about its context and its date. There are all sorts of questions still, even though we have three papers,” he says.

These differences of opinion should not deflect from a remarkable new piece in the jigsaw of human evolution, a fossil that will continue to add important information for many years to come.

The skull was also compared to other late middle-Pleistocene fossils found throughout China, collectively called the Harbin group, that includes specimens such as the Xiahe mandible from the Tibetan Plateau and the Hualongdong, Dali, and Jinniushan fossils from across China. Most are thought by paleontologists to represent a transitional group between H. erectus and H. sapiens, and as a result, the group has never been given its own species name. What Ni and his colleagues are positing is that the Harbin cranium is not only different enough to be considered its own species, but that this scattering of other fossils might belong, along with H. longi, to a monophyletic sister group that places them between H. neanderthalis and H. sapiens.

University of Washington paleoanthropologist Elen Feuerriegel, who was involved in describing the Homo species H. naledi but was not part of this work, tells The Scientist in an email that she’s “not sure we have enough information about the Harbin group . . . to conclusively resolve these fossils as a separate species. . . . Only continued study of these fossils by a variety of scientists and scientific techniques will help us build a comprehensive picture of the significance of the Harbin fossils and how they fit into our increasingly web-like family tree.”

Even among the authors of the study, there hasn’t been total agreement. Chris Stringer, an anthropologist at the Natural History Museum in London and an author on two of the papers, agrees that the cranium warrants its own designation, but he might have chosen to group it, along with the Dali fossil, as H. daliensis. He says in prepared comments he sent to The Scientist, “In wide-ranging studies such as these it is inevitable that not all the team will necessarily agree with all the views expressed in the publications. . . . But these differences of opinion should not deflect from a remarkable new piece in the jigsaw of human evolution, a fossil that will continue to add important information for many years to come.”

The third study is a first stab at working H. longi into human evolution. The authors created a new phylogenetic tree for the Homo lineage using 95 fossils and more than 600 measurements and morphological traits and modeled the presumed biogeographic migrations of different groups during the Pleistocene. The resulting tree confirmed that the Harbin cranium, along with other fossils from the Harbin group, constitute a monophyletic sister lineage with H. sapiens, pushing the time when modern humans and Neanderthals last shared a common ancestor back 400,000 more years and displacing them as our most recent ancestor. 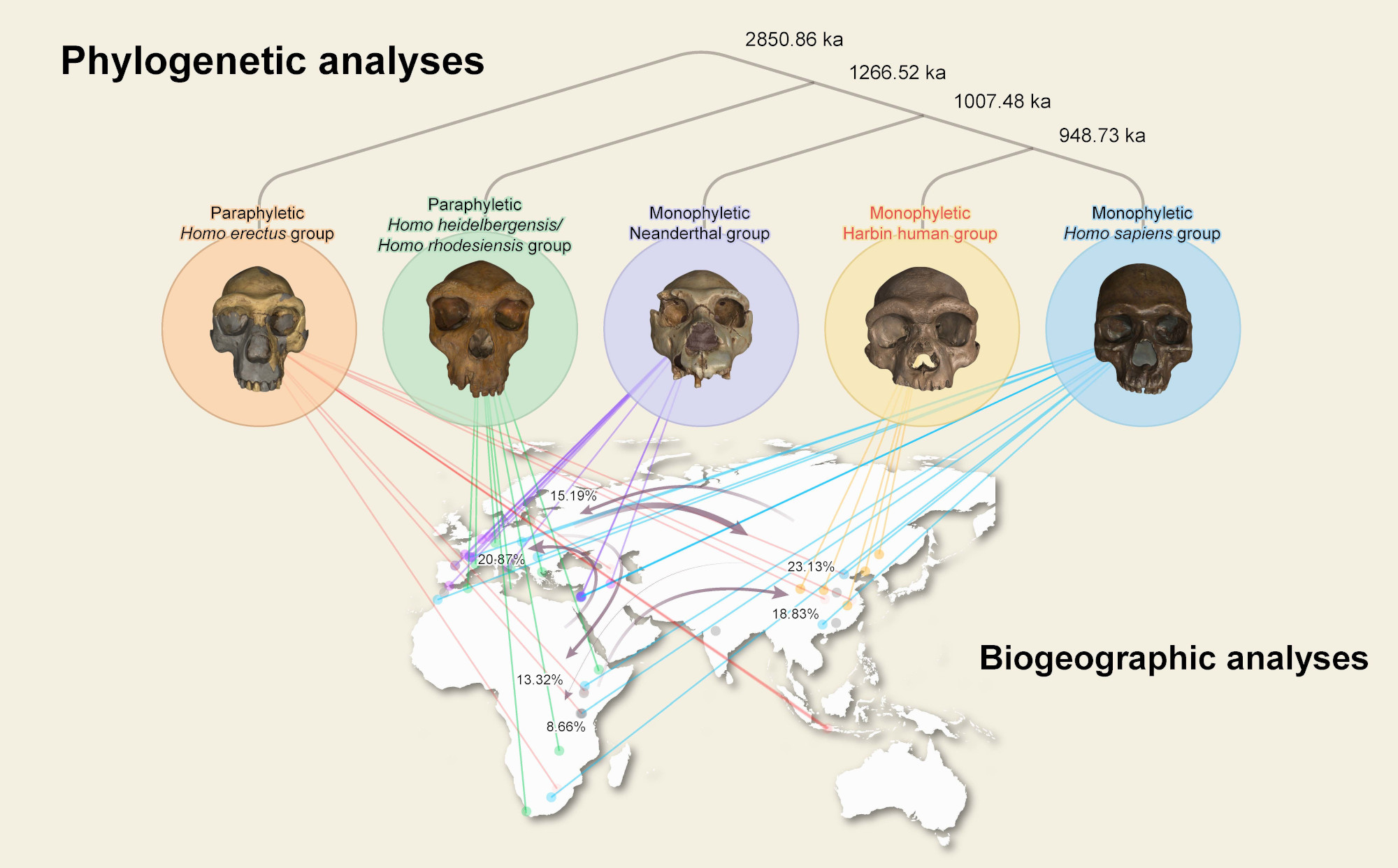 The authors’ new tree details the phylogeny of Homo and suggests a bidirectional pattern of migration between Africa and Asia.
Ni et al., The Innovation, 2021

Perhaps more interesting, say Ni and Petraglia, the inclusion of the Xiahe mandible from Tibet within this new lineage hypothetically links the Harbin cranium to another enigmatic group of ancient humans, the Denisovans. In one of the papers, the authors suggest that the cranium’s tooth was similar to those in the mandible and that the two might belong to the same species. “They match pretty well in terms of the overall size, and in our phylogenetic analysis, they group together,” Ni says, despite their being separated by a vast geographic distance.

Recent work using paleoproteomics had supported the idea that the mandible came from a Denisovan, and mitochondrial DNA sequenced from soil taken from the site also hinted that Denisovans had once been there. Some scientists, such as Petraglia, find these two pieces of evidence compelling enough to label the mandible a Denisovan fossil, but Ni is less convinced, as the proteomics data only looked at a single amino acid site, and the soil was roughly 100,000 years younger than the mandible. Ni instead proposes assigning the specimen to the new Harbin sister lineage.

How exactly Denisovans and the Harbin group might be related remains unknown, but the connection does support the idea that species of Homo were interacting with one another, a finding supported by both the biogeographical analysis and another study, published June 24 in Science, that identified yet another new middle-Pleistocene Homo species in Israel, called Nesher Ramla Homo.

In contrast to the popular “out of Africa” hypothesis that modern people radiated out of Africa in several one-way pushes, Ni’s analysis supported previous work by other researchers that the flow was likely bidirectional, with populations moving across Europe to Asia and perhaps even back to Africa, although at a lower rate. Populations may have been largely isolated given the size of Asia, but they would have been able to seed new communities and diversify as they moved, an idea that has some traction in the field. “I think their reconstructions add additional weight to the idea that there were multiple lineages of archaic hominins dispersing into and populating Eurasia and East Asia quite early on,” Feuerriegel tells The Scientist.

H. longi, Ni suggests, might have been especially well adapted for migrations northward. If the skull truly did come from Harbin City, at roughly 46 degrees latitude, it would be the most northerly hominin fossil from the Pleistocene ever found. Most hominin fossils stop at 40 degrees, supposedly because of how challenging the conditions would have been during the Pleistocene’s several ice ages. One hypothesis for the cranium’s massive size is that it is an adaptation to cold. “The authors don’t actually make a big deal of this, but actually, that would be extremely important,” Petraglia says. “If they’re right about it being related to the Tibetan Plateau fossil, then what we’ve got going on is hominins that could adapt to northern climates, but also high-altitude climates. That would be unique in terms of human evolution.”