Rather than introducing small chunks of DNA as other viruses do, some giant viruses can contribute more than 1 million base pairs to a host’s genome, broadening the ways in which viruses may shape eukaryote evolution.

ABOVE: Scientists have found evidence that giant viruses integrate their genomes into that of their hosts, such as this species of Chlorella, a single-celled green algae.
©ISTOCK.COM, SINHYU

In the ultimate game of genetic hide and seek, scientists at Virginia Tech have identified several instances in which they found giant virus genomes embedded—some in their entirety—in the genomes of their hosts. The results, published today (November 18) in Nature, suggest that such integration by giant viruses may be more common than previously believed and that these viruses are likely an underappreciated source of genetic diversity in eukaryotes.

“We always assumed that [giant viruses] that can integrate into host genomes were not common,” Karen Weynberg, a virologist at the University of Queensland in Australia who was not involved in the work, tells The Scientist. “Now they’ve shown that these viruses are able to integrate on a much wider scope than we ever really perceived. It’s going to be groundbreaking, and I think people will be looking more into where these viruses are popping up.”

Giant viruses, so named because they tend to be about 10 times larger than the average virus, have challenged traditional ideas in virology since their discovery in 2003. In addition to their unusually large size, their genomes sometimes include genetic contributions from bacteria and eukaryotes, including metabolic genes. Because of this, “they don’t necessarily look viral” at the genomic level, says Frank Aylward, a virologist at Virginia Tech and a coauthor of the study.

Towards the beginning of his postdoc in Aylward’s lab, Mohammad “Monir” Moniruzzaman went searching for a handful of giant virus marker genes in all genomes accessible through the National Center for Biotechnology Information’s many databases—an exploratory exercise to see what came back. While most of the genes appeared in genomes labeled as viruses, Moniruzzaman says he was surprised by how many of these giant virus genes appeared in genomes labeled as belonging to microscopic marine phytoplankton.

Aylward and Moniruzzaman first thought they might be picking up contamination. But when they looked more closely, they noticed genetic signals suggesting parts of the viruses had been incorporated into the genomes of their hosts. Following up on this hypothesis, the team went looking for systematic evidence of this integration in 65 publicly available green algae genomes, some of which are known to be hosts to giant viruses. 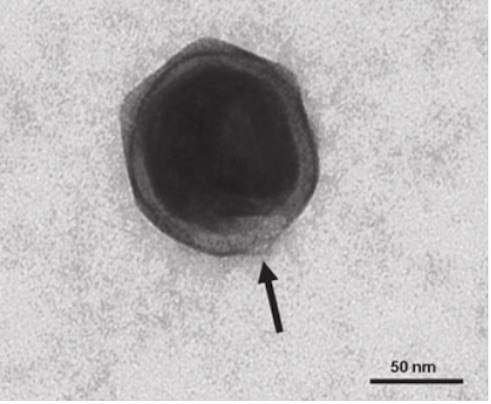 Moniruzzaman and his colleagues developed a bioinformatics tool, called ViralRecall, to identify regions in algal genomes suspected of having a viral origin based on several cues. For example, they used the tool to scan for certain viral hallmark genes, clear demarcations between the two genomes, shared genes between virus and host, and the presence of noncoding introns and large duplications within the integrated viral sequences thought to be caused by the host’s molecular machinery.

The researchers identified 18 examples of “giant endogenous viral elements” (GEVEs) within a dozen host genomes, meaning that some hosts had more than one of these GEVEs integrated into their genetic code. In some cases, the viral contributions were fragmented, representing only a small fraction of the virus genome. But in two samples, the entire viral genome appears to have made the jump into the phytoplankton, making up as much as 10 percent of the host’s genes. Overall, these GEVEs contributed between 78 and 1,782 genes.

“This essentially opens up a large conduit of horizontal gene transfer from viruses into eukaryotes,” Aylward says. “All sorts of possibilities open up once you see these huge cases of endogenization.”

Using a phylogenetic analysis, Moniruzzaman was able to trace the GEVEs back to members of the Phycodnaviridae and Mimiviridae families, two diverse groups that have informed much of what is known about giant viruses. The first discovery alerting scientists to their existence, for example, was of a mimivirus isolated from a cooling tower in England.

Taken together, the results suggest that endogenization by giant viruses may be more common than previously thought. “The idea that they built this new tool and then saw so many cases of this, even with just that first, somewhat limited scan, is pretty surprising,” says Nels Elde, an evolutionary geneticist at the University of Utah who was not involved in the current work. “They’ve built a somewhat circumstantial case, but with several lines of complementary evidence that look pretty strong.”

Elde urges caution in accepting the team’s analysis of duplications in the integrated viral genome as evidence of endogenization. Previous work, including his own on poxviruses (whose status as a giant virus is debated), has shown that viruses are capable of carrying out rapid, large-scale gene duplications themselves without a host. In the paper, the authors stress that they found many more duplications in endogenized viruses than in free-living comparisons.

A next step could involve looking more broadly across the tree of life. Scientists are unsure exactly how many different organisms these viruses can infect, but the green algae targeted in this study, in the phylum Chlorophyta, share a common ancestor with modern land plants.

Another step, both Weynberg and Elde say, should be studies into whether these introduced viral genes bring functional changes to the hosts. Roughly 10 percent of the human genome, for example, is thought to be derived from endogenous retroviruses, and some of their genes have been coopted in reproduction and brain function.

“I like the fact that this paper really focuses on the influence of viruses in shaping their hosts’ genomes that then spills into the evolution of the host as well,” Weynberg says. “Once these viruses become integrated into host genomes and persist across generations, it starts to confer benefits as well. That really highlights this intimacy that viruses have with their hosts.”