Researchers have discovered of a new genus of filovirus carried by fruit bats in China. The genome of the so-called Menglà virus shares sequences with other filoviruses, including Ebola and Marburg, and all three use the same receptor on host cells to gain entry for infection, the scientists reported in Nature Microbiology on Monday (January 7).

So far, there is no indication that Menglà has infected humans. “What it means for human health? I don’t think anybody knows,” Jeremy Farrar, head of the Wellcome Trust, tells STAT. “Somebody’s just got to screen some populations around where it was found, human populations, to see how many people have got antibodies to it and how common human infection is.”

The research group previously collected three undescribed filoviruses from bats, and Menglà, found in Yunnan Province, is the first of them to get a detailed work up. Genomic sequencing of the virus allowed them to reconstruct its glycoprotein, which they found can be used to infect human cells in culture just as efficiently as Ebola’s and Marburg’s glycoproteins. All three viruses’ glycoproteins use the host’s Niemann–Pick C1 (NPC1) receptor to infiltrate the cell.

The scientists also observed that Menglà could infect cell lines from bats, humans, monkeys, hamsters, and dogs. The authors conclude in their report that, like Ebola and Marburg, Menglà “exhibits broad cell tropism and hence poses a high risk of interspecies transmission.”

“Studying the genetic diversity and geographic distribution of bat-borne filoviruses is very important for risk assessment and outbreak prevention as this type of infectious disease can affect the general public without warning with devastating consequences,” coauthor Wang Lin-Fa, the director of the Emerging Infectious Diseases Signature Research Program at Duke-NUS Medical School in Singapore, says in a press release. 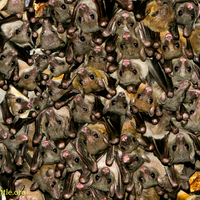 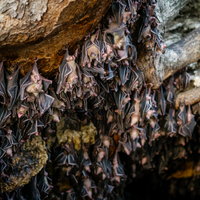