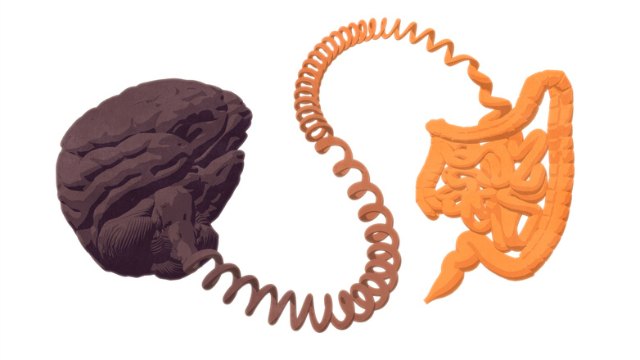 ISTOCK, PERCEPTION7The community of microorganisms living in the human gut, estimated to total 100 trillion, may have a profound effect on many aspects of our physiology, including immunity, metabolism, and even our brain and behavior. The majority of studies on the latter have so far been conducted in animals, demonstrating that gut bacteria (especially species belonging to Lactobacillus and Bifidobacterium) can influence social behavior, anxiety, stress, and symptoms of depression.  For instance, supplementation with a Lactobacillus species has been found to increase sociability in stressed mice, while germ-free mice exhibit impaired social behavior.

There are several possible mechanisms by which gut bacteria may affect the brain, including communication via the vagus nerve (the major neural link between the gut and brain), the immune system, and hormonal changes. It is also particularly intriguing that some gut bacterial species can produce chemicals of identical structure to our brain’s...

Can microbes manipulate us for their own benefit?

It is an appealing proposition that gut microbes may manipulate our behavior for their own advantage, such as improving their transmission to new hosts or enabling them to acquire food. For example, several prominent researchers in the field suggest that gut bacteria may make us more sociable in order to help them spread between people and may alter our cravings for particular foods to satisfy the nutrients that they need to survive.

If bacteria do have an effect on their hosts, it must be by means other than advantageous manipulation.

This is a compelling idea, fueled by examples of parasites seemingly controlling the behavior of their hosts, such as the Ophiocordyceps fungus that infects ants. This parasite is known as the “zombie-ant” fungus because it induces ants to climb to the canopy and bite on vegetation, securing themselves in a position in the forest that is favorable for fungal growth and sporulation.

So what conditions would need to be satisfied to allow gut bacteria to manipulate the behavior of their hosts? Two important criteria include having a high abundance within the gut microbiome and a lack of competition from other species. However, neither of these conditions is met in the complex microbial ecosystem of the gut, where there is a vast diversity of competing species and strains, with even the most abundant ones making up only a few percent of the total number of microbial cells.

The consequence of such microbial diversity means that a bacterial species producing a neuroactive chemical to try and control its host would likely be outcompeted by other non-manipulating bacteria. This is because any additional energetic investment made by the manipulating bacteria to produce the chemical would slow down its growth rate and so it would struggle to persist in the genetically diverse and competitive environment of the mammalian gut microbiome. If bacteria do have an effect on their hosts, therefore, it must be by means other than advantageous manipulation.

Evolution of “that gut feeling”

If the application of evolutionary theory suggests that our gut microbes are not pulling the strings on our behavior, then how did “that gut feeling” evolve? In our Perspective article, published last week (April 24) in Nature Reviews Microbiology, my coauthor Professor Kevin Foster also at the University of Oxford, and I propose that the effect of the gut microbiome on behavior is likely a result of natural selection on microbes to grow and compete in the gut, and natural selection on hosts to depend on their microbes.

Microbial growth results in the production of a diverse range of metabolites. For example, short-chain fatty acids produced by bacterial fermentation in the gut may directly affect brain function, while other metabolites may indirectly influence human behavior through their interactions with our immune system. In turn, we may also expect our physiology to have adapted to make use of such microbial products.

Akin to the “hygiene hypothesis,” which suggests that an absence of microbes impairs immune system development and may increase people’s susceptibility to allergies, we propose that humans may have evolved to depend on our symbiotic microbes for normal brain function, such that a change in our gut microbiome could then influence our behavior. Although this idea of evolved dependence has not previously been considered in relation to the microbiome-gut-brain axis, it may prove critical to explaining how the gut microbiome affects the brain.

Ultimately, by probing the evolutionary and ecological dynamics of the gut microbiome, this may help us to engineer it in ways that may benefit mental health and well-being. For example, commonly used probiotic strains are not particularly effective at colonizing the crowded and competitive environment of the gut.  However, by focusing on naturally occurring strains in the human gut whose microbial products affect the host in beneficial ways, this may help the development of probiotic treatments that can establish in the gut microbiome and so potentially influence gut-brain communication.

Katerina Johnson is a doctoral student at the University of Oxford researching the connections between the microbiome, brain, and behavior.