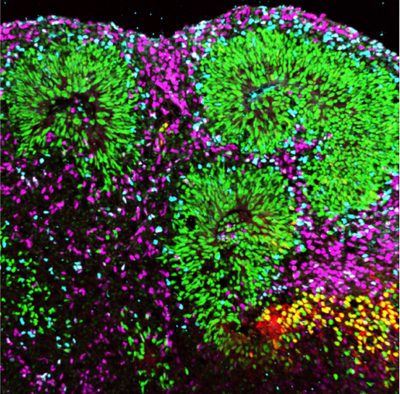 Brain organoids, small pieces of the human cerebral cortex grown in the lab, are becoming valuable scientific tools. By modeling the growth of brain cells and structures, these “brains-in-a-dish,” which are self-organizing tissues generated from skin or blood cells that are reprogrammed into stem cells, can allow scientists to examine early development and the processes underlying neurodevelopmental diseases.

Despite their potential, organoids still have some critical limitations. In a study presented this week at the Society for Neuroscience meeting in Chicago, Arnold Kriegstein, a stem cell biologist at the University of California, San Francisco, and his team demonstrate that human brain organoids don’t accurately recapitulate all aspects of development. After comparing cells from organoids to those from normally developing tissue, his team reports that organoids have altered gene expression patterns and lack the cellular diversity in found in the human brain. ...

The Scientist spoke to Kriegstein about the study and its implications.

The Scientist: Why did you decide to conduct this study?

Arnold Kriegstein: We had been working with organoids for a number of years. We’ve used them to model neurodevelopmental disorders and found that to be very useful. In parallel, we’ve been doing a cell census of the developing human brain—doing single-cell RNA sequencing and capturing the full diversity of cell types at key stages during human brain development. That gave us a roadmap against which we could actually benchmark our organoids and see if they were really being faithful to their in vivo counterparts.

We knew that morphologically, some subtypes of cells in the organoids didn’t fully resemble their normal counterparts, but we wanted a deeper dive into just how similar or different they were. In addition, people have made the claim that some of the organoid cell types—even though they don’t distribute, migrate, or layer quite the way they normally do [in vivo]—represent accurate models of their counterparts.

TS: What were the first hints that the organoids might not be recapitulating human cells?

Instead of having multiple subtypes of a certain cell, you have a kind of pan-identity without those really interesting subdivisions of gene patterns that we see in normal development.

AK: I’m especially interested in the neural progenitors, the cells that actually generate the neurons—there are several subtypes that we’ve identified in the normally developing human brain and also among other non-human primates. We were struck that, in our organoids, we had very few of these cell types, even though they were making neurons. Some of these progenitors are key intermediate steps on the way to making specific subtypes of cells. So we started looking there.

We took our organoids and dissociated them into their single-cell components, then used two different methods to actually identify the gene transcriptome of each individual cell—that is, all the RNA molecules that are being transcribed into proteins or signaling factors. Those gave us a fingerprint of the genetic identity of each cell. We already had a dataset from primary tissue, so we were able to not only identify the cell type, but also the stage of maturation.

With that in hand, we went in and looked very carefully at how these cells matured and how they compared to their counterparts in vivo.

TS: What were the most important differences that emerged in your study?

AK: The good news is, the major categories of cell types are reproduced in the organoids. And this has been reported by other labs as well. The bad news is, when you probe more deeply, you’ll see that there are blended gene expression patterns that are not seen in normally developing cells.

To give you an example, in normal tissue, [progenitor cells] don’t express mature neuronal genes, they only express genes that are appropriate for progenitors. In the organoids, we found those same cell types also express some neuronal genes, some of them in very abnormal combinations.

The other thing we noticed is, in the normally developing brain, there’s a really beautiful diversity of cell types and subtypes. That diversity is dramatically reduced in the organoids. Instead of having multiple subtypes of a certain cell, you have a kind of pan-identity without those really interesting subdivisions of gene patterns that we see in normal development.

TS: So from a bird’s-eye view things look similar, but once you dig deeper there seem to be differences.

AK: And you don’t have to dig too deep to see the differences.

I should mention that we have some idea about why the cells aren’t as precise as they should be. The organoids, across all protocols, show a very enhanced level of metabolic stress. . . . This is very different from what we see in normal tissues. We wondered whether the stress itself might contribute to the lack of gene identity.

We explored that in two ways. First, we took cells that were normal—that is, cells that were developing in the normal [human] brain—dissociated them, and put them into organoids. (Editor’s note: The cells were obtained from post-mortem human tissue.) We noticed that within two weeks or so, they demonstrated increased stress, just like the organoid cells. More interesting perhaps, when we looked more deeply at their gene expression patterns, they also had a degraded identity that started to resemble the problem that we noticed in the cells that were generated from the [human] organoids.

Then, we took the organoid cells and grafted them into the brain of the developing mouse. We reasoned that was a more normal environment, and if there was something in the tissue culture environment that was causing the stress, putting them into an environment that was more normal might relieve that stress. In two weeks or so, we saw that the cells had normalized, that the stress levels were drastically reduced. And over time, the cell identity improved as well.

This was a very encouraging sign. It means that the limitations of these organoids are potentially reversible. If the correct culture conditions are met, we might be able to reduce the stress and improve the fidelity of the cells.

TS: If it turns out that the differences are really important, does that suggest people might have to go back and redo studies that have been done already?

AK: Yes. Right now, as you survey the field, you’ll notice there’s a lot of heterogeneity. Not everybody has been able to reproduce everyone else’s findings. There’s variability, even with the same protocol in different labs.

Some of the disease phenotypes that have been reported haven’t been reproduced or sometimes, there are even opposite results in different laboratories for the same disease. I think part of this variability might have to do with features that are overlooked, for example, the stress that I mentioned. We’d like to get models that are better able to do what everyone wants—namely, model disease and normal development.

TS: The subject of brain organoids often brings up the question of whether these lab-grown tissues might one day develop sentience—and the ethical implications of that. What are your thoughts on this?

AK: I think it’s appropriate to think about that. But first, I think everyone should realize that we’re very far away from anything like that at the present time. These cells are not actually normal cells—they’re unlikely to function quite the way normal cells would. They also represent a small fraction of the cell types that are in the normal cerebral cortex—and not only do you not have quite the same elements, but you certainly don’t have them in the right circuits.

Besides that, they also don’t have sensory input. And then of course, you’d have to have a certain mass of tissue. These little fragments that people are making are a tiny fraction of the cortex. There are several hurdles along the way before we can begin to think of something that could possibly be an ethical concern.