Since the start of the COVID-19 pandemic, researchers have been striving to develop low-cost tests to detect the presence of SARS-CoV-2 in patient samples. Now, a team of researchers based at Harvard University’s Wyss Institute and MIT have unveiled a quick and inexpensive testing platform capable of distinguishing between major SARS-CoV-2 variants, according to a paper published Friday (August 6) in Science Advances.

The platform, called miSHERLOCK (pronounced “my-sherlock”), is fully self-contained from sample preparation to test readout. It requires no external equipment or instruments, and is eventually meant to be constructed by the user from 3-D printable parts and battery-powered electronics. The team was led by biomedical engineer James Collins, who is also cofounder and director of Sherlock Biosciences, a firm built around the CRISPR-based diagnostic tool called SHERLOCK which the platform employs (hence miSHERLOCK: it’s short for minimally instrumented SHERLOCK).

This device is not the first SHERLOCK-based test to detect SARS-CoV-2. Last May, a different platform employing the same CRISPR technology was granted emergency-use authorization by the US Food and Drug Administration for COVID-19 testing, and another recently developed SHERLOCK assay can deliver a positive COVID result similar to a pregnancy test.

However, those tests still require external steps and lab equipment for sample processing, while a miSHERLOCK test runs from start to finish within the self-contained device. Prepping raw samples for nucleic acid analysis takes several steps, including breaking open cells and viral particles to access the nucleic acids, stripping the sample of proteins and other cellular components that could interfere with the reaction—all while being careful to not degrade the nucleic acids; single-stranded RNA is particularly sensitive to degradation.

“The work described in this paper is really innovative, because it combines the instrument-free [platform] with CRISPR detection,” says University of Connecticut biomedical engineer Changchun Liu, who was not involved with the study.

Boston Children’s Hospital infectious disease specialist and study coauthor Rose Lee says the motivation of the miSHERLOCK project was to create a testing platform that would work in resource-limited settings, including clinics with limited access to lab equipment and trained lab technicians, or even within one’s own home. She says early on in the pandemic, conventional testing materials, such as nasal swabs and sample transport media, were in short supply. Lee recalls the team asking, “Could we create a simpler diagnostic that would allow for decentralized testing—particularly as the variants start to come out?”

The result was an assay requiring only a handful user steps and no equipment beyond what is included in the testing apparatus, which fits in the palm of a hand. The test requires two milliliters (less than half a teaspoon) of saliva. After the user spits into the tube and adds a few chemicals, the saliva is wicked down a column in the first 3-D printed reaction chamber, which is heated to 95 °C by the battery-powered heater. Viral particles are broken open, and any nucleic acids in the sample, such as the RNA genome of the SARS-CoV-2 virus, concentrate on a special membrane at the bottom of the column. Then, the user transfers the column to the second 3-D printed chamber (that runs at 37 °C) and pushes a plunger, plopping the membrane into a new tube and releasing water to activate the freeze-dried one-pot SHERLOCK reaction.

The diagnostic procedure requires that a user spit into the sample preparation chamber and then transfer the collection disc to the reaction chamber and press a plunger, which activates the reaction and minimizes the risk of cross-contamination.
Wyss Institute at Harvard University

SHERLOCK, which stands for “specific high-sensitivity enzymatic reporter unlocking,” involves a couple of steps. First, any RNA in the sample is converted into DNA. Then, an amplification step makes copies of a specific region of a viral gene. The amplification uses an enzyme instead of PCR’s traditional temperature cycling to open up the target template DNA—meaning that the whole reaction runs at a constant temperature. Finally, a Cas12a enzyme bound to a SARS-CoV-2–specific guide RNA scans the DNA in the reaction mixture for the viral sequence that complements it. If it finds it, the guide RNA will bind to it and the Cas12a becomes activated—and begins indiscriminately cutting the nucleic acids around it, including a reporter probe that brightly fluoresces if it gets cut.

By the end of the reaction in a miSHERLOCK device, LED lights inside the reaction chamber shine on the sample, making positive tests glow brightly. In the case of dim fluorescence, the researchers have developed a companion smartphone app that helps users determine if they have a positive test, and also allows them to instantly report their result to local public health officials. According to the paper, the entire process takes about an hour, has a comparable limit of detection to current approved PCR tests, and the entire apparatus only costs about $15.

“I think this is one of the only examples where you can go from literally no equipment—like nothing beyond what is in the device itself—to actually generate a result in the span of an hour,” says Massachusetts General Hospital gastroenterologist and study coauthor Xiao Tan.

The authors say idea behind using saliva instead of more-invasive (and oft-dreaded) nasopharyngeal swabs was simplicity, and Liu adds that the non-invasive saliva collection is ideal for point-of-care diagnostics. “It’s more convenient than swab samples,” he says.

But as easy as it is to spit in a tube, extracting nucleic acids from saliva is a different story. Saliva is a complex mixture, says Tan, full of enzymes that “will basically kill off any reaction—or cause excessive false positives” because, like the CRISPR enzyme in the test, salivary nucleases can chomp through the assay’s reporter probe.

See: "COVID-19 Diagnostics: How Do Saliva Tests Compare to Swabs?"

To neutralize the proteins and enzymes that would interfere with the assay, the sample column delivers a one-two punch: a three-minute incubation at 95 °C plus the chemicals added by the user inactivate the enzymes while leaving the viral RNA intact. In its current form, the researchers had to add the chemicals manually, but they envision a commercial version of the product coming preloaded with freeze-dried chemicals coating the inside of the tube that are rehydrated when the user adds their saliva.

In addition to being able to test for general SARS-CoV-2 infection, the specificity of Cas12a means that it can be used to distinguish between variants of the pathogen. By swapping out Cas12a’s guide RNA from detecting a generic SARS-CoV-2 sequence to one that detects variant-specific mutations, they were able to correctly determine which variant they had added to saliva samples greater than 95 percent of the time, although the limit of detection was different from variant to variant. The researchers designed another version of the testing platform where four reaction chambers can run side-by-side, with each using different variant-specific guide RNA. Although they admit miSHERLOCK can’t replace traditional sequencing to discover new variants, they say they hope it will aid in tracking variant spread across the world—especially in areas that don’t have easy access to sequencing equipment.

“The specificity is what's really exciting,” says MIT graduate student and coauthor Devora Najjar. “When we do the variant detection, we're detecting between SNPs within the spike protein, and that's super, super, super high resolution in terms of what you're looking for on a on a nucleic acid level.” She adds that it’s rare to have a test that is both so quick and specific down to the single base pair level.

The researchers say their goal is to make the entire testing platform cheap and easy enough for anyone to assemble from start to finish—and to eliminate steps that normally require equipment such as pipettes or thermal cyclers, but miSHERLOCK isn’t ready to be rolled out to home-bound patients or remote clinicians yet. Lee says the current iteration of the prototype was meant for academic publication, not at-home use, adding that while the 3-D printable plans for the reaction chambers are freely available, the current prototype still requires quite a bit of assembly

“I think that it would be really amazing if a person could 3-D print this test in their own house, get some components, assemble it themselves as if it were IKEA furniture, and then just buy the [components] that they can use,” says Helena de Puig, a postdoc at the Wyss and a coauthor. Alternatively, she says, users could either buy the 3-D printed parts and assemble them, or could even buy the device fully assembled. In any case, users would need to buy kits containing the freeze-dried SHERLOCK reaction components and parts of the test that can only be used once, like the RNA-trapping membrane or the plunger. Tan says they envision the SHERLOCK reaction components—which include the pathogen-specific Cas12a—being as easy to switch out as different flavors of instant coffee pods. 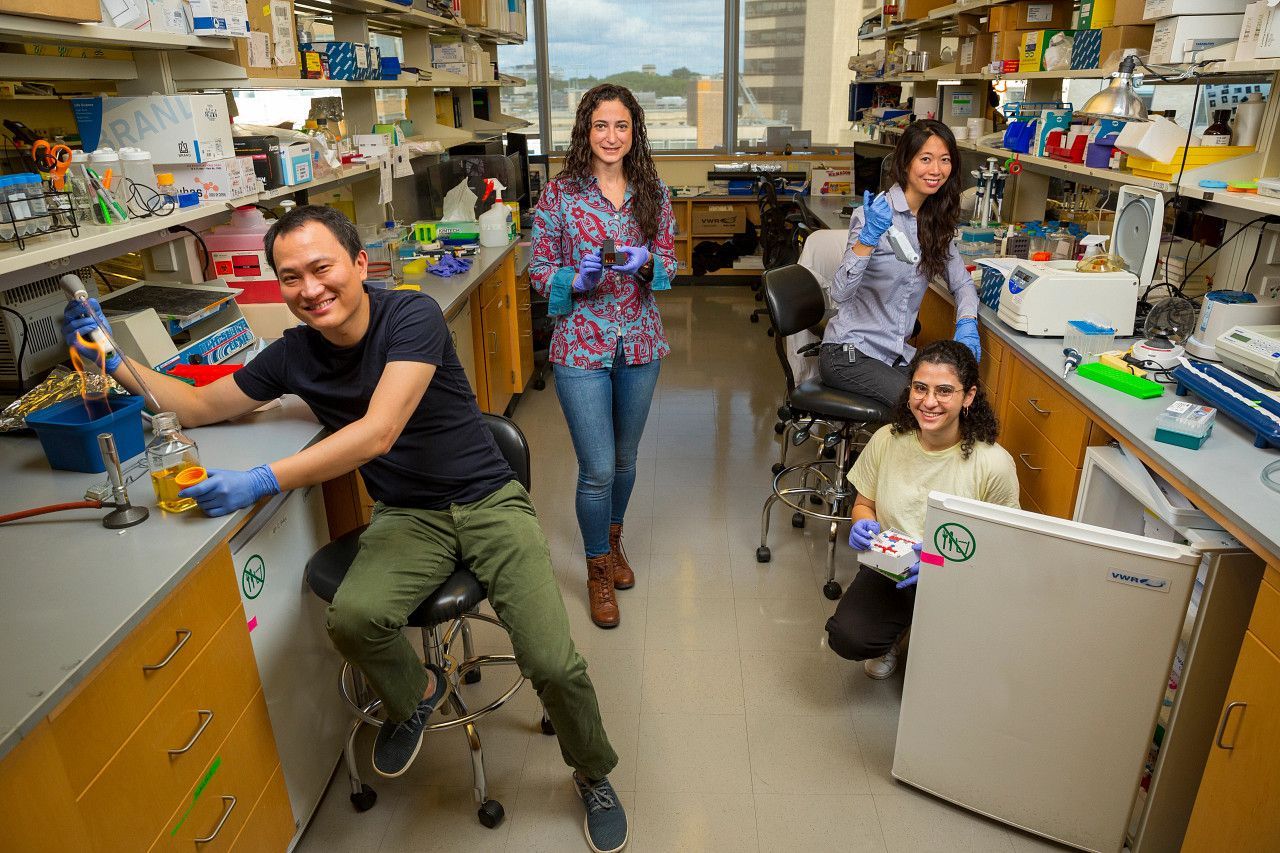 In addition to the hardware needing to be adjusted for commercial manufacturing, the assay itself would need to be fully tested and approved by the FDA before it could be released to the wider public. One major limitation of the current study is that miSHERLOCK was only tested on 27 clinical samples, notes University of North Carolina, Chapel Hill, infectious disease physician and molecular epidemiologist Jonathan Parr in an email to The Scientist. Parr develops CRISPR-based diagnostics for malaria but was not involved with the current study. The sample donors were all COVID-19 patients from the Dominican Republic and none were infected with variants of concern, he adds. While the authors acknowledge the paucity of clinical samples in their paper, Parr says “it raises concerns about the ‘real world’ performance of their assay nonetheless.”

In the paper, the researchers explained that few samples were available to test because saliva samples have not been routinely collected for SARS-CoV-2 testing. They had to make do with what they had, which is why their specificity tests were run on commercially available (but not otherwise infected) saliva samples that were “spiked” with different variants, and didn’t include tests on the now-dominant Delta variant. Najjar notes that Delta simply wasn’t a variant of concern when they were developing the platform a few months ago, but adds that the speed with which Delta has spread is a testament for the need for flexible testing platforms like miSHERLOCK. “The variants that matter one month might be completely irrelevant the next,” she says.

Hopefully sooner rather than later, there will no longer be a need for easy-to-use coronavirus testing platforms, but the researchers say miSHERLOCK won’t start collecting dust when that time comes. “The principle of the device can be used for many different things,” says de Puig. “If we just change the guide RNA and some components, then we can diagnose different infections. As long as there is nucleic acid material,” she says, you can build an assay around it.

The researchers say they are also thinking about modifying the assay to be able to process different sorts of samples, including blood and urine. Lee says she is already working with de Puig and Najjar on adapting the miSHERLOCK to diagnose acute tropical febrile illness. They are thinking about “having a multiplex device that could distinguish between malaria, Ebola, dengue—these types of things that are actually very clinically difficult to distinguish,” she says, by “using this kind of low cost, easily distributable, decentralized multiplexing device” in settings that may not have access to more traditional forms of clinical lab testing.

“Development of a SARS-CoV-2 assay is not novel in and of itself,” writes Parr, noting the fact that multiple CRISPR-based SARS-CoV-2 tests have been developed, and there are a growing number of CRISPR-based assays that can identify specific pathogen strains and mutations. “The important thing about this paper,” he says “is that the authors worked hard to make their assay simple and easy to use, all the way from sample preparation to final read-out.”