ABOVE: Microscopy image of a brain organoid showing neuron precursors (magenta) and deep-layer projection neurons (green), which are one of the cell types affected by autism risk gene mutations Paola Arlotta laboratory at Harvard University and Kwanghun Chung laboratory at MIT

Mutations in three genes strongly associated with autism shift the pace at which certain inhibitory and excitatory neurons develop, according to a study published today in Nature. The findings reveal a novel point of convergence by which the mutations affect brain growth and activity, the researchers say.

“There is a problem of timing, basically,” says lead researcher Paola Arlotta, professor of stem cell and regenerative biology at Harvard University. That timing issue, she says, “may result later in imbalances in the way the circuit is wired and works.” An imbalance between excitatory and inhibitory signaling in the brain is thought to contribute to autism.

The three genes—ARID1B, CHD8 and SUV420H1 (also known as KMT5B)—are all involved in regulating chromatin, the complex of proteins and coiled DNA that makes up chromosomes. In addition to having an increased likelihood of autism, people who carry a mutation in one of these genes also often have a large head, but the reason for these similarities was unknown.

The new work, conducted in 3D clusters of cultured brain cells, offers an important clue: Although mutations in one of the three genes affect these organoids in different ways, they all lead to changes in the development of two cell types—inhibitory neurons that express the chemical messenger gamma-aminobutyric acid (GABA) and deep-layer excitatory neurons.

The result suggests that the forms of autism caused by these distinct mutations converge at the cellular level, says Hongjun Song, professor of neuroscience at the University of Pennsylvania in Philadelphia, who was not involved in the work. “That’s interesting [and] surprising.”

Arlotta and her colleagues made the organoids using reprogrammed stem cells from two non-autistic people and four pre-existing cell lines. They engineered these cells to carry a loss-of-function mutation in ARID1B, CHD8 or SUV420H1.

The team then used RNA sequencing to profile the genes expressed in the organoids, and from that they inferred the neuron types present at a given stage of development. 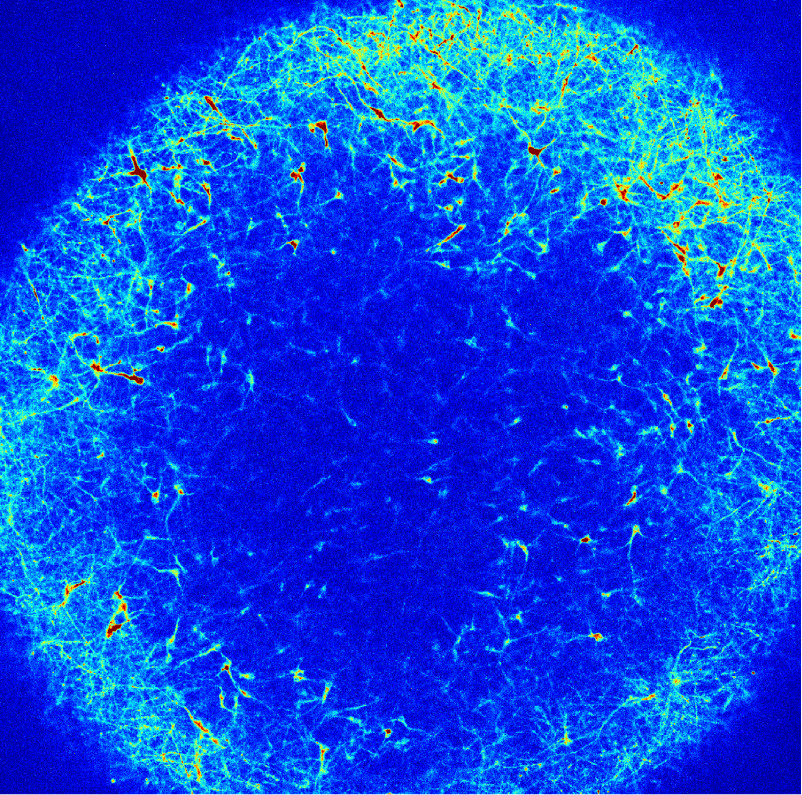 And organoids carrying a mutation in SUV420H1 had atypically low levels of spontaneous neuronal activity, the team found after imaging the flow of calcium into the cells—suggesting that the organoids’ altered development affects the function of circuits.

The impact of a given mutation depended heavily on the genetic makeup of the cells used to make the organoids, the researchers found: One cell line that carried an ARID1B mutation, for example, did not develop GABAergic cells prematurely. But, when engineered to instead carry a mutation in SUV420H1, the same cell line showed a robust early increase in GABAergic cells.

This finding fits with the diversity of outcomes that researchers see in people, Arlotta says, in which the same mutation might lead to prominent traits in one person and milder ones in another.

“It demonstrates the power of brain organoids as a model,” Song says.

Future studies should generate organoids from cells that carry the exact mutations found in autistic people—rather than engineering loss-of-function mutations, he says, adding that doing so on a large scale is a challenge for the field as a whole. In some autistic people, “the mutation might not be complete loss of function,” he says.

Arlotta and her colleagues also plan to develop organoids that carry multiple autism-linked mutations at once, she says, to see whether they also converge on atypical development of these cells.

This article was original published February 2 on Spectrum.