It shouldn’t hurt to put on socks, wash hands, or walk about, but for some people with damaged nerves, certain innocuous actions can be agony—a condition called mechanical allodynia. Now, researchers have discovered in mice that, regardless of whether such nondamaging activities are actually perceived as painless or painful (as in allodynia), the very same cells—those containing high levels of the protein Piezo2—transmit the tactile information to the central nervous system. The results, presented by two independent research groups, appear in Science Translational Medicine today (October 10).

“Put these two papers together as a unit and you’ve got it all,” says Jeffrey Mogil of McGill University in Montreal who studies the genetics of pain, but who did not participate in either project. “They used completely different techniques to address the same question . . . and they make a pretty compelling case” for the importance of Piezo2.

When injury or inflammation occurs in a part of the body, sensations that would normally not hurt—such as a hug, a handshake, or getting dressed—can become painful. Imagine, for example, the tenderness of a badly sunburned back, against which a soft cotton shirt may feel like sandpaper.

In the short term, such pain from normally painless stimuli is thought to encourage safeguarding of the injured area “so that it heals faster,” says Swetha Murthy, a postdoc in the laboratory of Ardem Patapoutian at Scripps Research in La Jolla, California, and a coauthor of one of the papers. But for some unlucky patients, nerve damage—caused by, among other things, chemotherapy, surgery, or injury—can lead to a permanent state of allodynia, where everyday gestures and actions cause misery.

Touch and pain—the sensations felt by pushing on the right and wrong end of a thumbtack, respectively—are detected by discreet subsets of sensory neurons: nociceptors for pain and low-threshold mechanoreceptors (LTMRs) for touch. LTMRs are characterized by high levels of the transmembrane ion channel Piezo2, which transduces mechanical pressure into electrical signals. Whether these cells signal pressure stimuli in allodynia, when touch is felt as pain, was unknown.

To find out, Murthy and colleagues examined mice genetically engineered to lack Piezo2 and compared their behaviors with wildtype animals. The team gave the mice allodynia in their hind paws by either injecting them with capsaicin, causing local inflammation, or by surgically severing a nerve. Both injuries caused the wildtype animals to show signs of pain, withdrawing their paws and licking, when the area was gently brushed. Mice lacking Piezo2, on the other hand, showed a dramatically reduced response to the paw touching, whether they had allodynia or not. The response of the engineered mice to a painful pinprick, by contrast, was only slightly muted compared to that of the control animals.

In the accompanying study, neuroscientist Alexander Chesler of the National Center for Complementary and Integrative Health in Bethesda and colleagues also engineered mice to lack Piezo2. In these animals, in vivo calcium imaging of neural activity confirmed a lack of cellular activity in response to touch (whether by brushing or vibration of the skin), while cellular activity in response to a painful pinch appeared similar to that of wildtype animals. Cells of the Piezo2-lacking animals also did not respond to touch stimuli under three different conditions of localized allodynia.

“The major take away for me is that mechanical allodynia . . . is driven by sensory afferents that have Piezo2 as their transducer. I think that is now confirmed and is very clear in the two papers,” says neurologist Clifford Woolf of Boston Children’s Hospital and Harvard Medical School who was not involved in either paper.

In rare cases, PIEZO2 mutations can occur in people, where they are associated with deficits in touch sensation and coordinated mobility, but the patients can still feel pain. When Chesler and colleagues gave four such PIEZO2-lacking patients capsaicin injections into their forearms to induce local allodynia, their sense of touch at the inflamed site remained deficient compared with that of healthy controls, who in contrast felt pain.

Together with the mouse studies, these results indicate that PIEZO2 transmits the sense of touch, specifically, mechanical pressure, regardless of whether it is perceived in the brain as painful or painless. An inability to transmit this pressure sensation because of the missing transducer thus fails to produce a pain sensation in allodynia.

“[It’s] quite gratifying . . . how much these two studies agree with one another,” says Chesler, considering “there was no coordination between our labs.”

With the data from humans supporting the results seen in the mouse models, “the results are a stepping stone to start looking at treatments for clinical pain,” says Murthy.

A Piezo2-inhibiting treatment could not be used systemically to treat patients with chronic allodynia because the sense of touch throughout the body would be affected. If a locally administered treatment, such as a topical cream, could be developed, says Woolf, a patient’s “sense of touch and tactile allodynia would be diminished,” while their normal sense of pain would remain intact. That’s important, he adds, “because you need that information to protect yourself.” 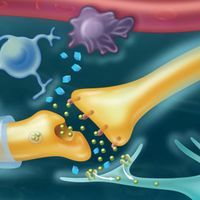 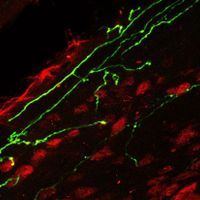