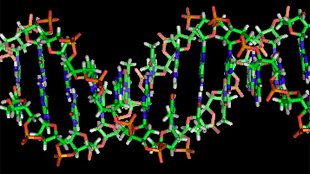 WIKIPEDIA, RICHARD WHEELEROnce prohibitively expensive and laborious, whole-genome sequencing (WGS) is now edging its way into the clinic. The cost of the technique finally fell below the $1,000 mark earlier this year, heralding a future in which clinicians could routinely use it to diagnose people with unusual diseases, identify genes behind rare inherited disorders, and predict how patients might respond to treatments.

But WGS is not ready for prime time just yet, according to researchers from Stanford University. In a small pilot study, the team sequenced the full genomes of 12 adults, finding that current technologies struggle to reliably and accurately read certain parts of the genome containing important disease-related variations. And interpreting the morass of data is still time-consuming and subjective business. The team’s results were published today (March11) in JAMA.

“There’s no question in our minds that whole-genome sequencing is transformative for medicine,” said Stanford’s Euan...

The team sequenced 12 healthy volunteers using two different technologies—one from Illumina and another from Complete Genomics—and found several potential problems. For example, the platforms failed to capture 10 percent to 19 percent of genes associated with inherited diseases at enough depth to accurately identify all their nucleotides, making it hard to link variations within them to a person’s health.

And the two platforms were not always consistent. They largely agreed over variations in single nucleotides, but rarely did so when it came to larger insertions or deletions. For these “indels”—many of which are associated with disease risk—the two sequencing platforms corroborated one another just one-third of the time. “These are solvable problems, but we have to be realistic that we haven’t solved them yet,” said Ashley.

The researchers used an algorithm of their own design to parse the data for medically relevant variants, and ended up calculating 89 to 125 per patient. The seven-strong team—which included three genetic counsellors, three clinicians who specialize in informatics, and a medical pathologist—manually reviewed each variant. The researchers checked the literature and existing databases to determine whether these variants were likely to affect the risk of disease, assessed the odds as to whether the aberrations might change the structure of a protein, and more. They eventually winnowed the list down to around two to six clinically important variants per patient.

One woman had a variant in the BRCA1 gene that meant she was very likely to develop breast and ovarian cancer, despite having no family history of either disease. A clinical genetic testing lab confirmed the result, and after discussions with her doctor, she opted to have her ovaries and Fallopian tubes removed, and to go through regular breast screening.

“Within this small group, there was a life-changing discovery,” Ashley said. While, given the size of this study, is hard to extrapolate how often such cases would arise in a general population, “it speaks to the promise of the technology.”

The researchers were also pleased that the process was cheaper than expected. They estimated that total cost of WGS, including sequencing and interpretation of results, came in at $15,000 per patient. And on the back of the results, independent physicians recommended further tests at a cost of $351 to $776 per patient. “I’m often asked if healthcare costs will skyrocket if we do this for everyone,” said Ashley. “Surely there will be hundreds and thousands of dollars spent on follow-up tests like MRIs and CT scans. But in this study, the follow-up costs were relatively modest.”

On the flipside, interpreting full genome data is still tricky, time-consuming, and largely subjective. The genomics professionals who reviewed the variants spent about an hour on each, and often disagreed about their potential to cause disease.

“This report is sobering, but not at all surprising,” Eric Topol from the Scripps Translational Science Institute in La Jolla, California, told The Scientist in an e-mail. “While WGS has indeed been useful in some individuals with a serious, undiagnosed disease, extrapolation to healthy volunteers is off the mark. All the accuracy problems become magnified.”

“Not until we have millions of individuals with WGS, across various medical conditions and ancestries, will sequencing be adequately informative,” Topol added. “We’re at least a few years away for that to be the case.”

David Dimmock from the Medical College of Wisconsin in Milwaukee is more optimistic. “The study is quite outdated,” he said. “A lot of the limitations they bring up are things we were well aware of in 2011, and they’re much less of a problem now because technology has progressed significantly.” State-of-the-art technologies can now sequence genomes far more deeply than even a few years ago, and new chemical techniques cover regions that were poorly served by older methods.  “There are still holes, but we’re in a very different place,” said Dimmock.