Stéphane Pesant was on deck finishing up processing samples and preparing gear after a long day when he heard it: the exhalation of a sperm whale. It was a calm night back in 2011 in the waters off Peru, remembers Pesant, a marine biologist, and he was one of just two people still on deck when the giant animal surfaced. “We couldn’t see it at all, it was pitch-dark,” he says. “But we could hear it, and it would dive and come back up.”

Speaking from his office on land in the UK, where he works for the European Bioinformatics Institute, Pesant tells The Scientist that he’s had many such moments of wonder aboard Tara, a 36-meter research sailboat now on its latest in a series of multi-year expeditions to learn more about the world’s oceans. Managed by the Paris-based nonprofit Tara Ocean Foundation with help from multiple scientific partners and corporate sponsors, the craft collects data that are made freely available to researchers.

Samples collected aboard Tara over the past decade-plus have helped researchers identify hundreds of thousands of new viruses and catalog tens of millions of microbial genes. Tara’s latest mission, which began in December last year and is slated to run through 2022, is collecting water samples along the Pacific and Atlantic coasts of South America, and it will collect more en route back to France, in an effort to better understand microbes’ roles in the marine ecosystem. 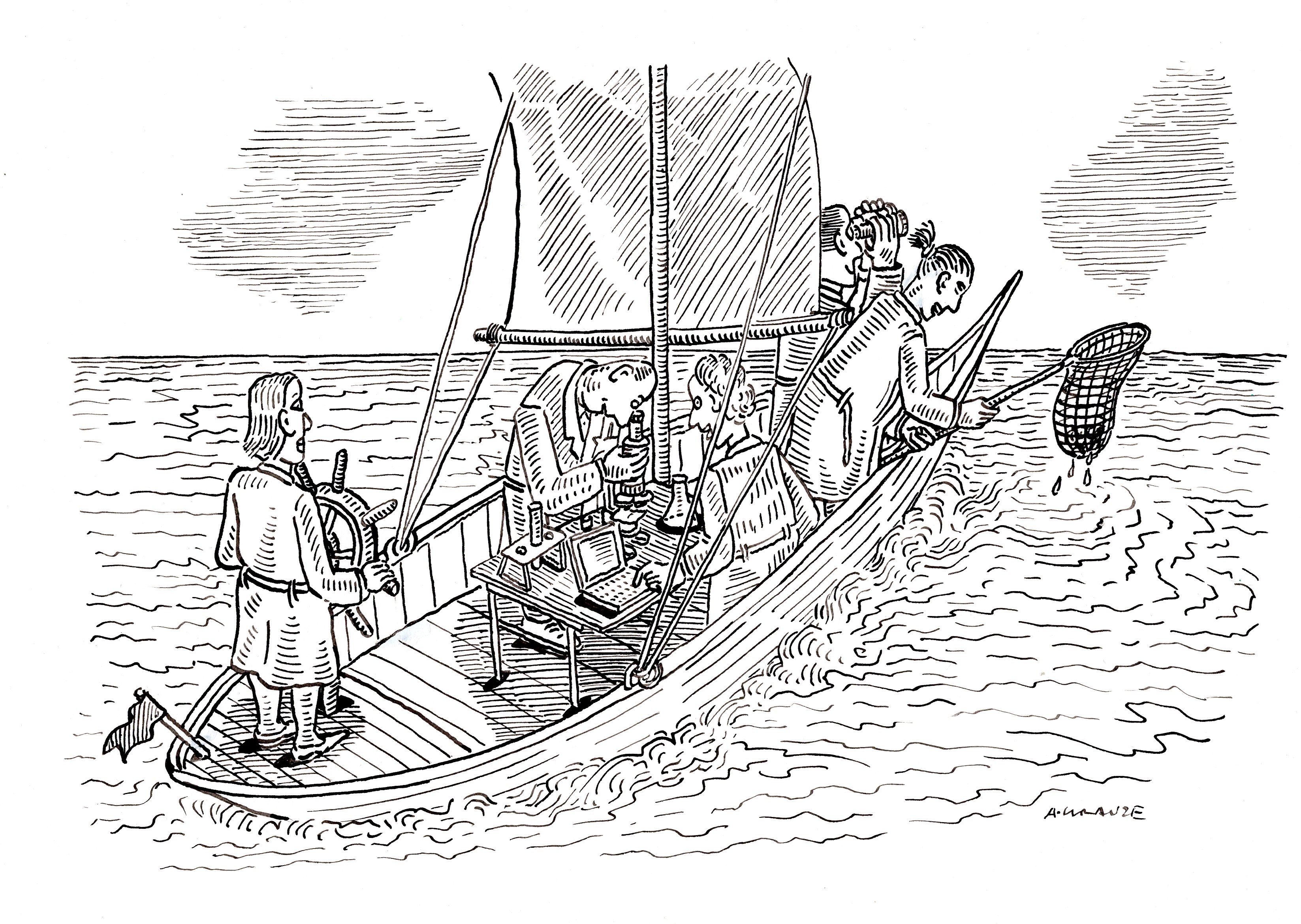 Pesant first became involved with the projects in 2009, with Tara Ocean, the first Tara mission to focus on microbes, and much of his work takes place from a desk back in Europe rather than on the ship. He manages how samples are cataloged on the boat and flow to the various labs on land that analyze data. That’s no small task: to be useful, each sample must be cataloged with metadata on the location and depth at which it was collected, along with other parameters. That involves barcodes and notes taken on paper, which must be scanned to PDFs. Then, the results of analyses by different labs need to be made accessible so that researchers can use others’ results to validate or otherwise build on their own.

To Pesant, this centralized sample collection and tracking is a key advantage of Tara over large oceanographic excursions that carry multiple research teams, each with their own sample-collecting and data-handling protocols. “Although we are split as different labs, we act as one lab,” he explains. In 2015, for example, genomics researchers on one team identified different types of plankton that were frequently found together in water samples—and were able to use imaging results from another group to confirm the organisms’ symbiotic relationships with one another.

Tara’s relatively small size—compared to, say, the US National Oceanic and Atmospheric Administration’s Okeanos Explorer, which measures 68 meters—does pose a challenge when it comes to finding space for samples, Pesant notes. The solution involves offloading the samples every three months and shipping them to the European Molecular Biology Laboratory in Heidelberg, Germany, via a specialized courier service. Crew members also rotate about every three months, while scientists tend to stay on the boat for about one month. The boat has writers and artists on board, too, for shorter stints.

Tara Ocean wasn’t the first project to deploy a smaller vessel and uniform sampling and analysis protocols over diverse swaths of the world’s seas. The Global Ocean Sampling (GOS) Expedition, launched in 2004 by J. Craig Venter in the wake of his team’s work on a draft sequence of the human genome, took place on Venter’s 95-foot (29-meter) yacht. Yu-Hui Rogers, who ran the J. Craig Venter Institute’s genome center at the time, says GOS was driven by curiosity about “who’s out there” in the ocean, and by a more practical aim. Venter “really wanted to know what kind of new organisms out there actually have biological functions that can potentially be used in other areas,” such as bioremediation or energy production, she says.

Like Pesant, Rogers, now at the nonprofit Jackson Laboratory, sees consistent sample-handling protocols as a plus of the single-boat approach. In GOS’s case, the samples were all analyzed onsite at the Venter Institute. The work also carries risks, however. For instance, “[on] certain legs, we had our director of security on board with actual firearms to make sure that we didn’t get caught in a pirate situation,” she recalls. Sailing from Bermuda to the US Virgin Islands, “we had nine-foot waves the entire time. . . . By the time we got there, I had so many bruises on me, it’s unbelievable.”

Other ways of collecting big data on ocean microbes have their own advantages and drawbacks. Working with multiple sample-collecting partners rather than a single vessel can cover more ground—or in this case, water, says Mitchell Sogin of the Marine Biological Laboratory at Woods Hole, who organized a different large-scale microbe-collecting project at around the same time GOS began. For that initiative, the International Census of Marine Microbes (ICoMM), “my notion was . . . we should just collect samples from as many different labs who were working with different cruises from around the world, so we engaged thirty or forty different labs as opposed to a single vessel,” and this enabled a more comprehensive picture of the ocean than do projects carried out with a single boat, he says. On the other hand, with multiple teams involved, collecting standardized metadata to go along with each sample proved a challenge. “You can’t imagine how many different ways people can mess up longitude, latitude parameters.”

See “Sequencing on the Seven Seas”

ICoMM and GOS showed, Sogin says, that “diversity in the oceans was enormously greater than anyone had predicted.” These days, Tara’s current mission continues to uncover a wealth of new organisms, but it’s also aiming to address specific questions, says Eric Pelletier, a genomics researcher who spoke with The Scientist from aboard the ship. Those include assessing the influence of upwelling, in which nutrient-rich water flows from the ocean depths to the surface, on plankton communities.

Pelletier says Tara’s smaller size is an advantage when studying the mixing of different waters in the ocean, including upwellings, because it can be navigated to the locations of such events as identified by satellite images—something that wouldn’t be feasible with less-maneuverable oceanographic vessels. On a personal level, with only 14 people on board, he also enjoys getting to know everyone—scientists and crew alike. The work is constant, he says, with mariners pitching in with scientific work and scientists helping to sail the boat.

Tara’s petite size is also one of the boat’s charms for Pesant. Thinking back to what made the experience with the sperm whale in 2011 so special, he explains, “Tara is very low on the water so you don’t dominate the sea, you feel part of it.”

For a more recent story about the results of the expedition, see “Q&A: Thousands of RNA Viruses Newly Discovered in Ocean Water”