ABOVE: David Gate studies links between the immune system and Alzheimer's, a disease characterized by amyloid-β plaques in the brain, seen in this micrograph as lightly-colored circles.
© ISTOCK.COM, OGPHOTO

For David Gate, one of the first real litmus tests of whether a research career was for him came while dissecting retinas as a premed student studying psychology at the University of California, Santa Barbara. Working in the eye biology lab didn’t really capture his imagination, and parts of the work were tedious, but Gate says that despite that, he loved the process—the basic work of doing experiments. “I quickly became a lab rat all day and night,” and was soon dissecting retinas better than anyone in the lab, Gate tells The Scientist.

After graduating in 2007, Gate went on to work as a lab technician with immunologist and Alzheimer’s disease researcher Terrence Town at Cedars-Sinai Hospital in Los Angeles. The connection between the brain and the immune system intrigued Gate, and he decided to pursue a PhD in brain sciences in Town’s lab at the University of Southern California, studying the role of the immune system in pediatric brain cancer. But it was as a postdoc working in the lab of neuroscientist Tony Wyss-Coray at Stanford University that Gate would make his biggest impact yet. 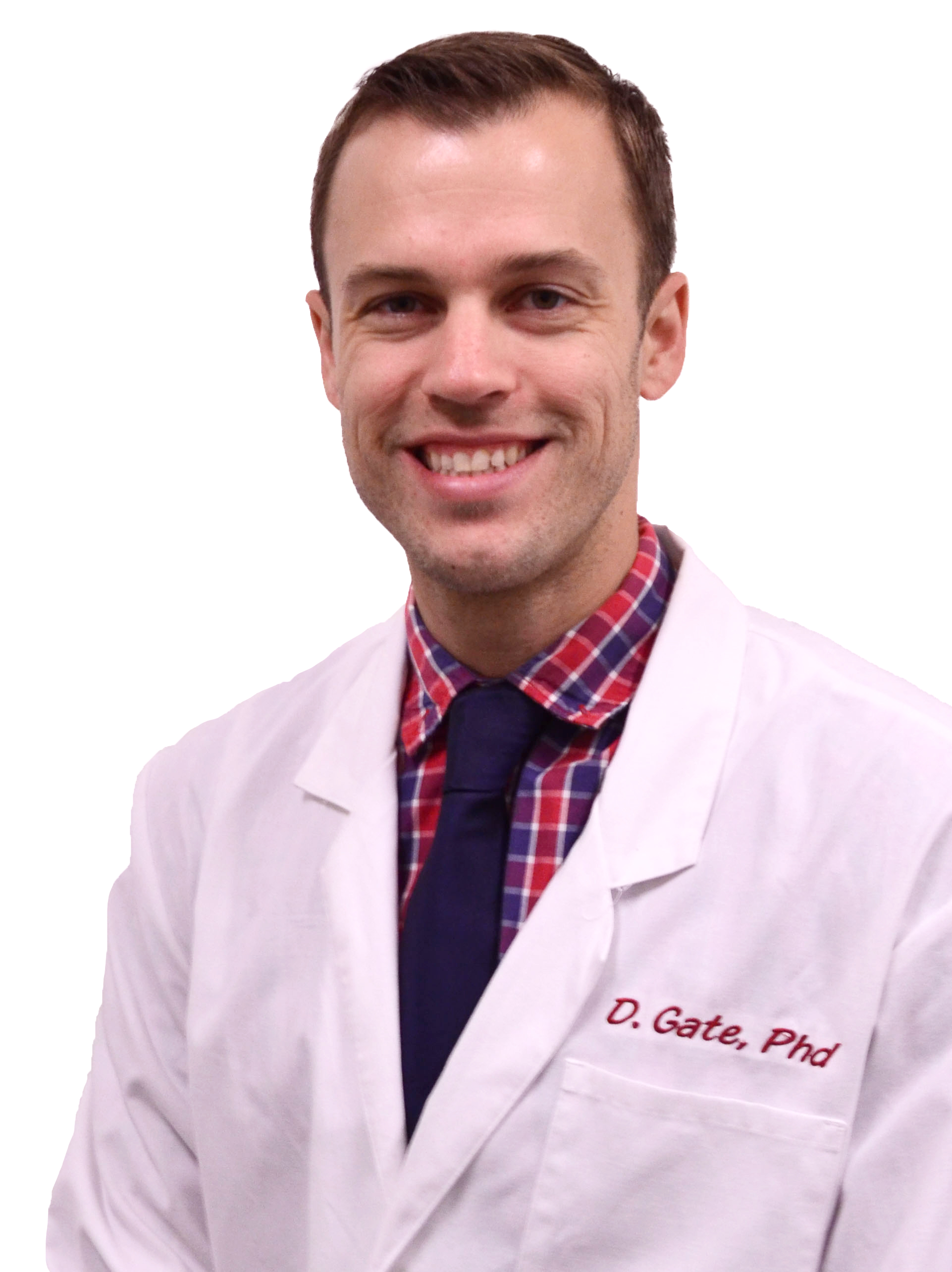 See “T Cells and Neurons Talk to Each Other”

The main focus of his research was brain rejuvenation, but on weekends, Gate was working a side project using patients’ blood samples to identify links between the immune system and Alzheimer’s disease. After months of collecting data on the levels of different immune cell types in the blood to see if there were any changes associated with the disease, Gate approached Wyss-Coray and made a proposal: that Gate stop his brain rejuvenation work and focus on his Alzheimer’s research full time.

“I think that took quite a bit of courage,” says Andrew C. Yang, a friend and former Stanford labmate of Gate’s who is now starting a lab studying the blood-brain barrier at the University of California, San Francisco. While everyone’s accounts of the lab paint a convivial picture, starting a whole new project is not without risk. “These experiments are not cheap,” says Yang. “He puts his reputation on the line with Tony when he says, ‘Hey, let’s go fund it. Let’s do it.’ It takes a certain type of vision.”

Wyss-Coray, it turned out, was on board. But he and Gate wanted a way to look for immune changes in the brain, as opposed to just the blood. Gate suggested they look at cerebrospinal fluid (CSF). “The CSF immune system is more specialized and is quite different from the blood in the composition of cell types,” Gate explains. “Since Alzheimer’s is a brain disease, it made sense to look at the brain’s immune system via the CSF.”

For years, researchers had been administering a highly accurate diagnostic test for Alzheimer’s that measures protein hallmarks of the disease in CSF collected via a spinal tap. In conducting this test, researchers take a sample of CSF and use a centrifuge to separate the liquid from the solids, which contain the cells. The liquid portion is then tested, while the solid portion is generally discarded. Gate realized that he could use that cell portion.

Their early findings were intriguing, and more than that, seemed to be something really novel, says Gate. The results showed elevated levels of a particular type of immune cell called CD8+ T cells in the blood and CSF of Alzheimer’s patients, as well as in the postmortem brains of people with the disease. What’s more, some of these T cells had rapidly proliferated in a process known as clonal expansion, which happens when they encounter a pathogen, and some of those clonally expanded T cells carried sequences encoding receptors that target a common human herpesvirus, Epstein-Barr virus (EBV).

The pair submitted a paper to Nature. While it was initially rejected, the feedback and requests for more information they got steered them in the right direction, says Gate, and the study was published in the journal in 2020. Meanwhile, Gate, Wyss-Coray, and colleagues filed a patent application based on their methods for measuring T cell markers associated with Alzheimer’s disease.

Gate and Wyss-Coray cautioned in the paper that there isn’t yet enough evidence to draw a causal link between EBV and Alzheimer’s—that is, it's unclear if EBV could make a person more susceptible to this disease or exacerbate cognitive decline. Indeed, researchers have previously published conflicting evidence of possible connections between the two.

See “Study Finds No Association Between Herpes Virus and Alzheimer’s”

Nevertheless, the realization that the state of the immune cells in the spinal fluid could be linked to Alzheimer’s was significant, says Wyss-Coray. “It led to a really great discovery and, I think, a shift in technology and how people look at the immune system in the brain.” Now, all around the world, people are looking at the solid portion of these test samples in a new way, Wyss-Coray adds. “Before David’s paper, almost everybody just sort of threw the thing away.”

Gate started his own lab at Northwestern University in September of this year and plans to continue studying the intersection between the immune system and neurodegenerative disease.

“We’re really excited to have him,” says Robert Vassar, the scientific director of behavioral neurology at Northwestern, who recruited Gate, adding that many people at Northwestern are interested in collaborating with their new colleague. “He’s going to be rising quickly and really making a huge impact, I think, on the field.”