ABOVE: DNA and RNA from bacteria that live inside human tumors, such as these Serratia marcescens bacteria (green) in human pancreatic cancer cells, could serve as blood-borne biomarkers.
LEORE GELLER AND RAVID STRAUSSMAN, WEIZMANN INSTITUTE OF SCIENCE, ISRAEL

When Greg Poore was a freshman in college, he lost his grandmother to pancreatic cancer. “She . . . essentially had 33 days from diagnosis to death,” he recalls. “No one could explain why they hadn’t detected the cancer before.” Three years later, in 2016, as an MD/PhD student in Rob Knight’s lab at the University of California, San Diego, Poore began investigating microbial inhabitants of tumors—and eventually, whether he could find traces of those microbes in the blood that might be used to diagnose patients earlier.

Poore and his colleagues used machine learning to mine microbial genome and transcriptome information from a database of blood and tissue samples from more than 10,000 cancer patients as well as data the team collected on healthy controls. There were indeed distinct microbial mixes in the cancerous versus healthy tissue of individuals with cancer, the researchers found, and in the blood of healthy people compared with those with cancer. In addition, the machine learning models were able to distinguish cancers of various types—and for some cancers, different stages—using microbial DNA and RNA in tumors and DNA in the blood.

The data were taken at a single point in time for each patient and don’t establish cause and effect, says Poore, but the microbial signatures could have diagnostic value. He, Knight, and another coauthor, Sandrine Miller-Montgomery, have founded a startup, Micronoma, that aims to develop a liquid biopsy based on microbial sequences in the blood.

The study “builds upon findings of numerous reports over the past decade demonstrating that solid tumors are not sterile sites as once thought,” says Susan Bullman, who studies links between cancer and the microbiome at Fred Hutchinson Cancer Research Center in Seattle and was not involved in the study. But to be translated into a clinical diagnostic tool, she adds, the results will first need to be replicated with more samples, this time collected using protocols designed to avoid microbial contamination. 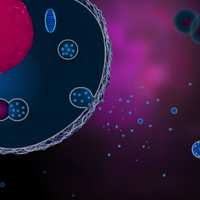 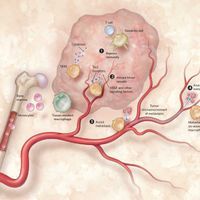