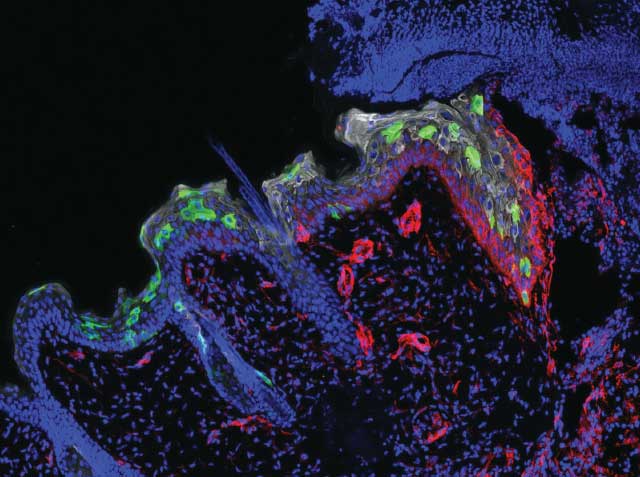 Inflammatory Memory
Our body is routinely assaulted by ultraviolet radiation, irritants, and pathogens. Shruti Naik, an immunologist at Rockefeller University, wondered: “Do these stressors have any kind of lasting impact on cells?” Immune cells are known to “remember” infections and inflammatory events so that they can respond faster to future insults, but what about the epithelial stem cells that maintain the skin and promote wound healing?

Multiple Assaults
Naik and her colleagues induced inflammation in mice by exposing the animals’ skin to chemicals, fungal infection, or mechanical wounding. Then they measured the time it took for the skin to heal after injuring it in the same place a second time. On average, regardless of the type of injury, skin that had been previously inflamed healed about 2.5 times faster than the skin of mice that were wounded for the first time.

Swift Repair
To uncover the genetic basis for an “inflammatory memory,” the researchers searched for genetic loci in the epithelial stem cells that were maintained in a chromosomally accessible state after the first injury. Multiple regions of chromatin were left “open” for up to 180 days after an assault, allowing rapid transcription of key stress response genes following a second injury.

Beneath the Skin
Epithelial stem cells are the first nonimmune cells found to have a memory, and the findings point to “a primitive basic response to jazz up the cells quickly and make them heal the wound,” says George Cotsarelis, a dermatologist at the University of Pennsylvania’s Perelman School of Medicine who was not involved in the study. “It changes the way people think about the skin now.”