A study underscores the importance of Dna2 in maintaining the integrity of the genetic code.

Few things are as dangerous for a cell as a DNA double-strand break. If both strands of the double helix are severed and left unrepaired, the cell could die at the next round of mitosis.

To protect against such a fate, a suite of DNA-repairing proteins is on standby for when breaks occur. One of them is the evolutionarily conserved enzyme Dna2, which helps prepare broken DNA strands for repair by other proteins and also degrades excess pieces of DNA produced during replication. 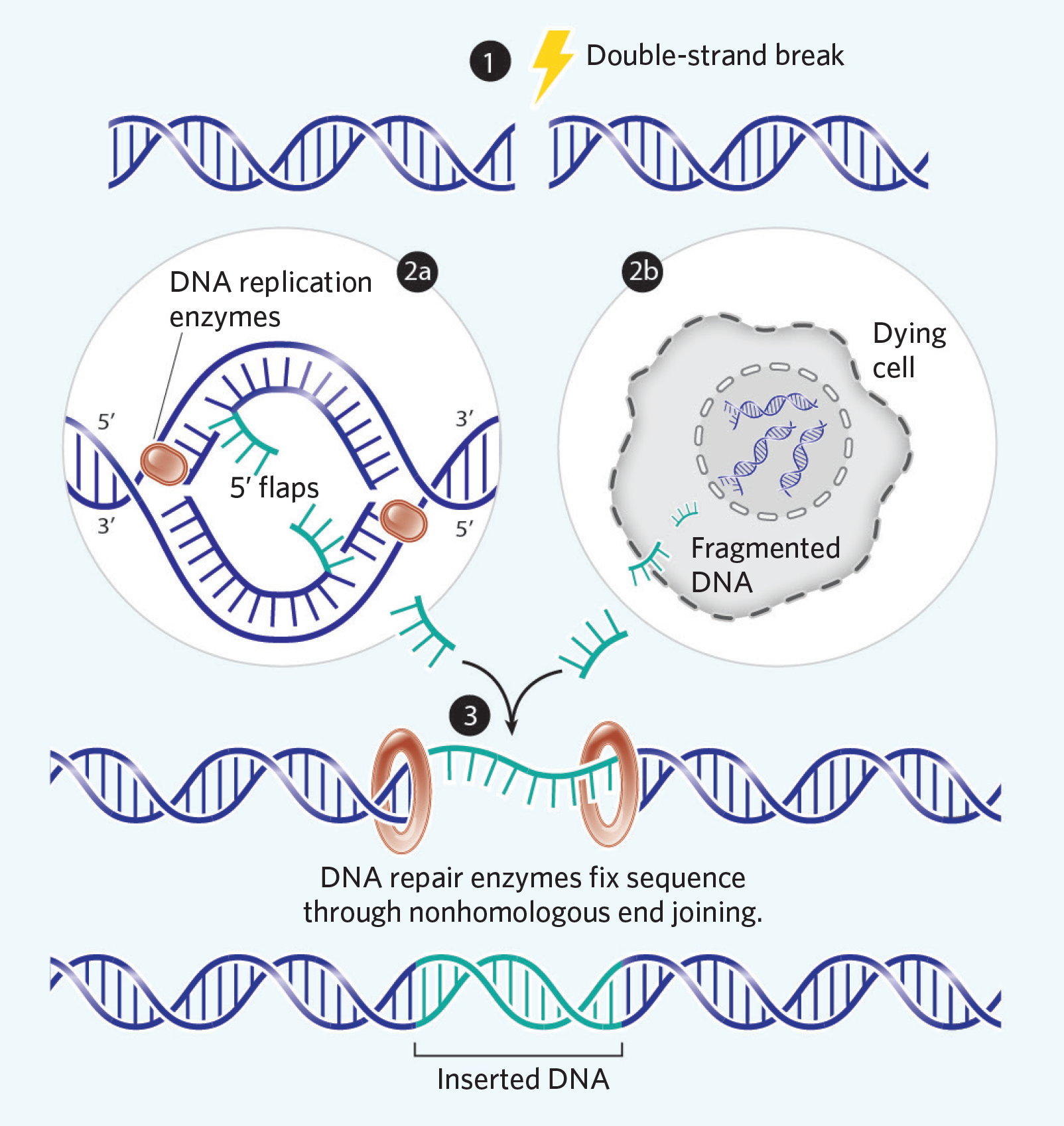 MIND THE GAP: When a yeast cell is engineered to lack the enzyme Dna2, double-strand breaks in its DNA (1), collect stray sequences from all over the genome. Authors of a new paper suggest these insertions...

To better understand the enzyme’s role, Grzegorz Ira, a geneticist at Baylor College of Medicine, and colleagues recently investigated the consequences of deleting Dna2 in yeast. The deletion alone would be fatal to the cells, likely because the bits of DNA that Dna2 breaks down are so damaging, so the team engineered mutants that also carried a mutation in pif1, which codes for an enzyme that’s believed to ready some of those substrates for processing by Dna2. In the double mutant, researchers think fewer toxic intermediates form, allowing the cells to survive.

The researchers also tweaked the yeast cells to conditionally express the enzyme HO endonuclease—which cleaves DNA at a specific locus known as MAT—when exposed to the sugar galactose. After letting the cells grow on plates of galactose for up to six days, the researchers examined the break sites by sequencing the DNA around the MAT locus. To their surprise, about 8 percent of the mutant cells carried a number of large insertions. By contrast, no insertions were found in control cells expressing HO endonuclease.

Sequencing revealed that DNA from just about anywhere in the genome—including retrotransposable elements, ribosomal DNA, genes, centromeres and telomeres, and sequences at which DNA replication is initiated—can land in these breaks.

The inserted sequences did not appear to be deleted from their original loci, suggesting that they arise through duplications. Ira explains this may have occurred due to the persistence of excess DNA that Dna2 would normally degrade.

Further experiments showed that once double-strand breaks occur in the yeast genome, the sites can collect any kind of DNA floating around inside cells, even without deletion of Dna2. Ira says the study demonstrates how easy it is for double-strand breaks to accumulate insertions, whether the stray DNA that’s inserted results from Dna2 deficiency or from some other mechanism. “The entertaining part of the story is that any gene can jump from one locus to another using this mechanism,” he says.

Robert Schiestl, a pathologist at the Fielding School of Public Health at the University of California, Los Angeles, who was not involved in the study, suggests that the vulnerability of double-strand breaks to insertions might be relevant for cancer, and says it would be interesting to know whether similar insertions occur in malignant cells with naturally occurring Dna2 deficiencies. However, the current study’s results aren’t a game-changer, he adds. “Knowing the function of the gene that they mutated, it’s not that surprising. It’s almost expected.”