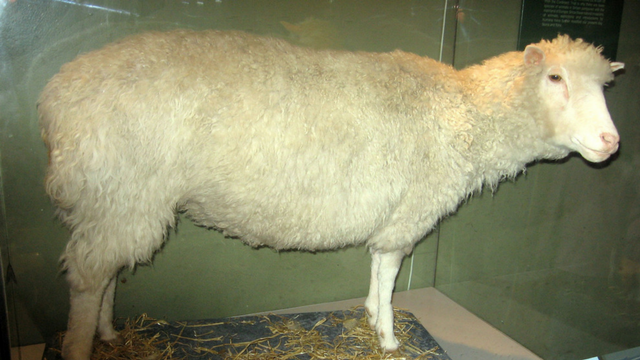 Dolly, preserved at the National Museums of ScotlandWIKIMEDIA, TIMVICKERSDolly the sheep, who in 1996 became the first mammal to be cloned from an adult cell, may have died of natural causes, reports a new study published yesterday (November 23) in Scientific Reports.

Dolly died of an infection at 7 years old, which is considered young for a sheep. She was reported to show signs of severe arthritis in her knees at the time of her death, which raised suspicion amongst scientists that her early death was driven by premature aging caused by the cloning process itself.

To shed light on the issue, University of Nottingham developmental biologist Kevin Sinclair and a team of veterinarians undertook a new analysis of Dolly’s skeleton, comparing it with the bones of her daughter Bonnie and of two sheep cloned from differentiated cells, named Megan and Morag. X-rays showed that the two...

These findings are in line with a previous study led by Sinclair that showed that Dolly’s cloned sisters had aged normally, with similar musculoskeletal and metabolic health as non-cloned sheep. Taken together, the results suggest that concerns about prematurely aging clones might be unfounded, and that the cloning process likely wasn’t to blame for Dolly’s arthritis. Instead, Sinclair and his colleagues believe it might have been caused by her giving birth to six lambs, as pregnancy can increase the likelihood for developing arthritis in sheep.

“We wanted to establish once and for all that cloned animals that survive and [make it] into old age are normal,” Sinclair told The Scientist earlier this year.