See when and where our ancestors may have interbred with Neanderthals and Denisovans.

Some 350,000 or more years ago, the group of hominins that would evolve to become Neanderthals and Denisovans left Africa for Eurasia.

A few hundred millennia later, about 60,000 to 70,000 years ago, the ancestors of modern non-Africans followed a similar path out of Africa and began interbreeding with these other hominin groups. Researchers estimate that much of the Neanderthal DNA in modern human genomes came from interbreeding events that took place around 50,000 to 55,000 years ago in the Middle East. Thousands of years later, humans moving into East Asia interbred with Denisovans. 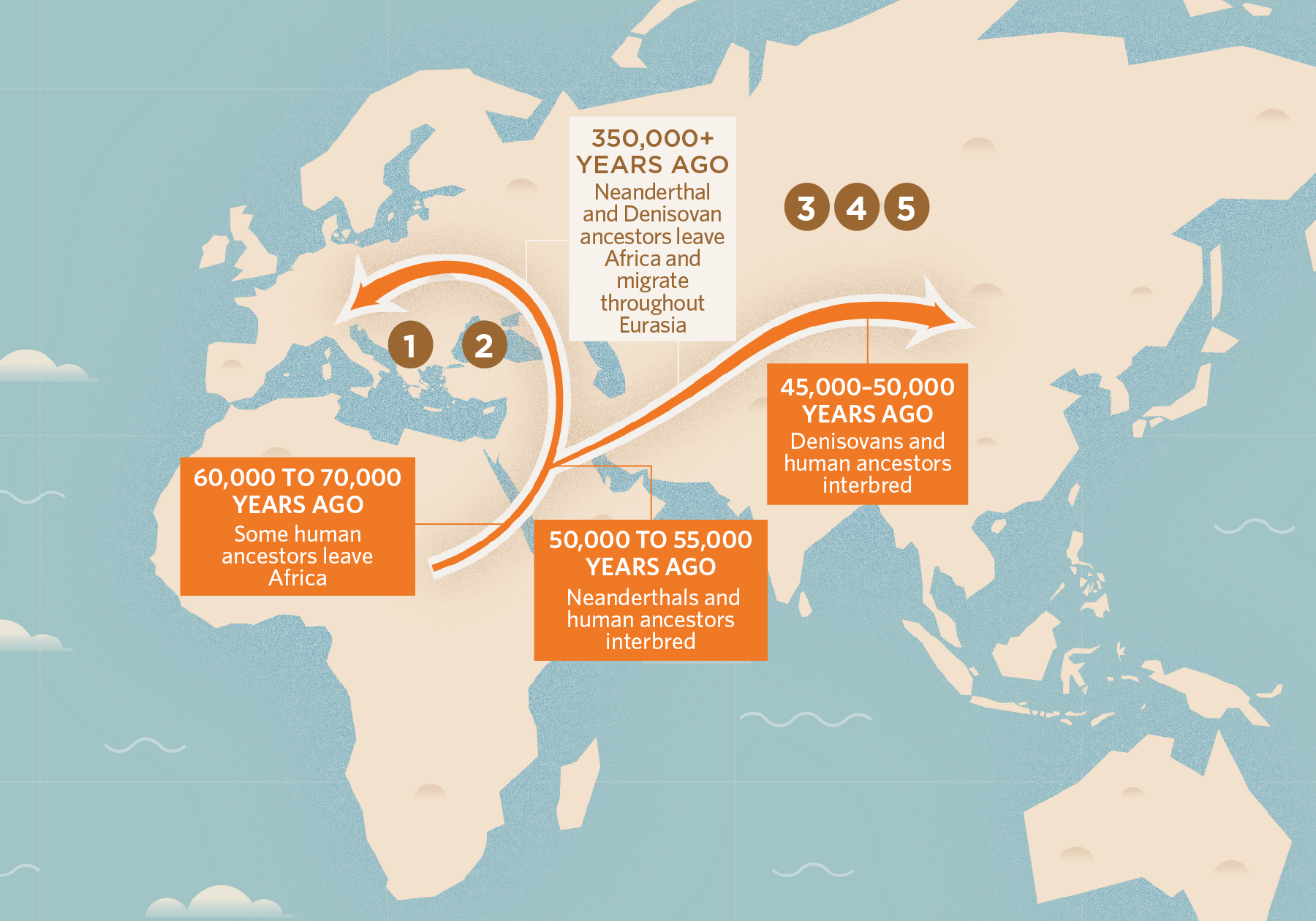 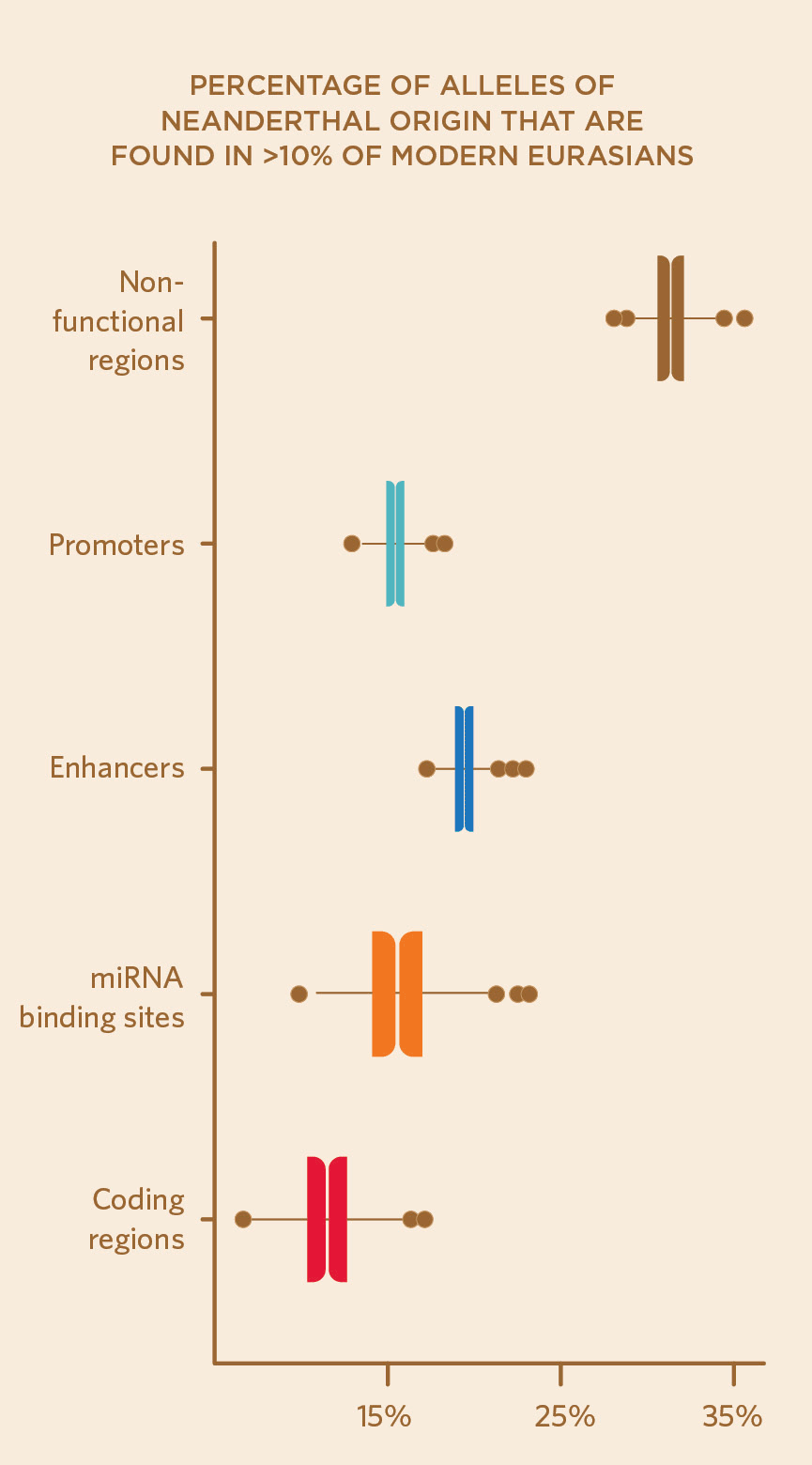 ANCESTRAL ANALYSIS: Sequences of Neanderthal origin in people of Eurasian descent are more common in nonfunctional and regulatory regions of the genome than in coding regions.
Am J Hum Genet, doi:10.1016/j.ajhg.2019.04.016, 2019; the scientist staff

In their seminal 2014 studies, the groups of David Reich of Harvard Medical School and Joshua Akey, then at the University of Washington, noted that the Neanderthal variants that correlated with human phenotypes did not appear in coding regions. Two years later, a genome-wide analysis published by investigators in France found that Neanderthal ancestry was enriched in areas tied to gene regulation (Cell, 167:643–56.e17, 2016). The implication was that sequences that originated in Neanderthals tend to have “less impact through protein and more impact through gene expression,” says coauthor Maxime Rotival, a geneticist at the Pasteur Institute in Paris.

To ask this question more directly, Akey turned to the Genotype-Tissue Expression (GTEx) Project, which has cataloged gene expression data from roughly 50 tissues for each of 10,000 individuals. “It’s this really fine-scale record of gene expression,” says Akey. His then-postdoc Rajiv McCoy, now an assistant professor at Johns Hopkins University, developed a method to assess messenger RNA levels based on which allele was being expressed—the one from an individual’s father or mother—and the researchers applied this approach to people in the GTEx database who were heterozygous for a particular Neanderthal variant. Comparing expression levels based on which allele was being expressed, the researchers found that a quarter of the stretches of Neanderthal DNA in human genomes affect the regulation of the genes in or near those stretches (Cell, 168:P916–27.E12, 2017).

Earlier this year, Rotival and two colleagues calculated ratios of Neanderthal to non-Neanderthal variants across the genome and compared those ratios for protein-coding regions and various regulatory sequences, specifically enhancers, promoters, and microRNA-binding sites. Consistent with previous results, they found a strong depletion of Neanderthal variants in coding portions of genes, and a slight enrichment of the archaic sequences in regulatory regions (Am J Hum Genet, doi:10.1016/j.ajhg.2019.04.016, 2019). “What we see is that in coding regions, the ratio of archaic to non-archaic variants is much smaller than the ratio outside of coding regions,” says Rotival.

“This is not at all a surprise,” says Vanderbilt University’s Tony Capra, whose lab has generated similar findings in people of Eurasian descent, “but it’s really nice to see it quantified very comprehensively.”