By harnessing a unique property of yeast, scientists can synthesize histones and the enzymes that modify these proteins, which spool DNA and influence gene expression.

There are more than 60 documented types of modifications to the histone proteins that form the backbone of DNA, and studying the role of these marks is complicated. For one, the cellular environment dictates which epigenetic marks end up on certain amino acids in the tails of histones—large, boxy proteins around which an organism’s DNA is coiled—so studying histones outside of their native context can alter results. Add to that the fact that scientists don’t often know all the targets of a particular enzyme. Current approaches—using recombinant proteins to create synthetic histones and enzymes for in vitro experiments or trying to isolate and purify natural ones—are expensive and difficult to scale.

The platform, which in just a couple of days processes samples that might otherwise take a week, relies on a unique feature of the yeast called surface display—some proteins the organism produces are naturally displayed on the cell’s surface, usually to initiate mating between two yeast cells. Scientists have already taken advantage of S. cerevisiae’s surface display to synthesize antibodies and other proteins for medicine and research. Waldman, who developed the system as part of her dissertation, had the idea to do this with modified histones, which could be assessed with antibodies and flow cytometry. 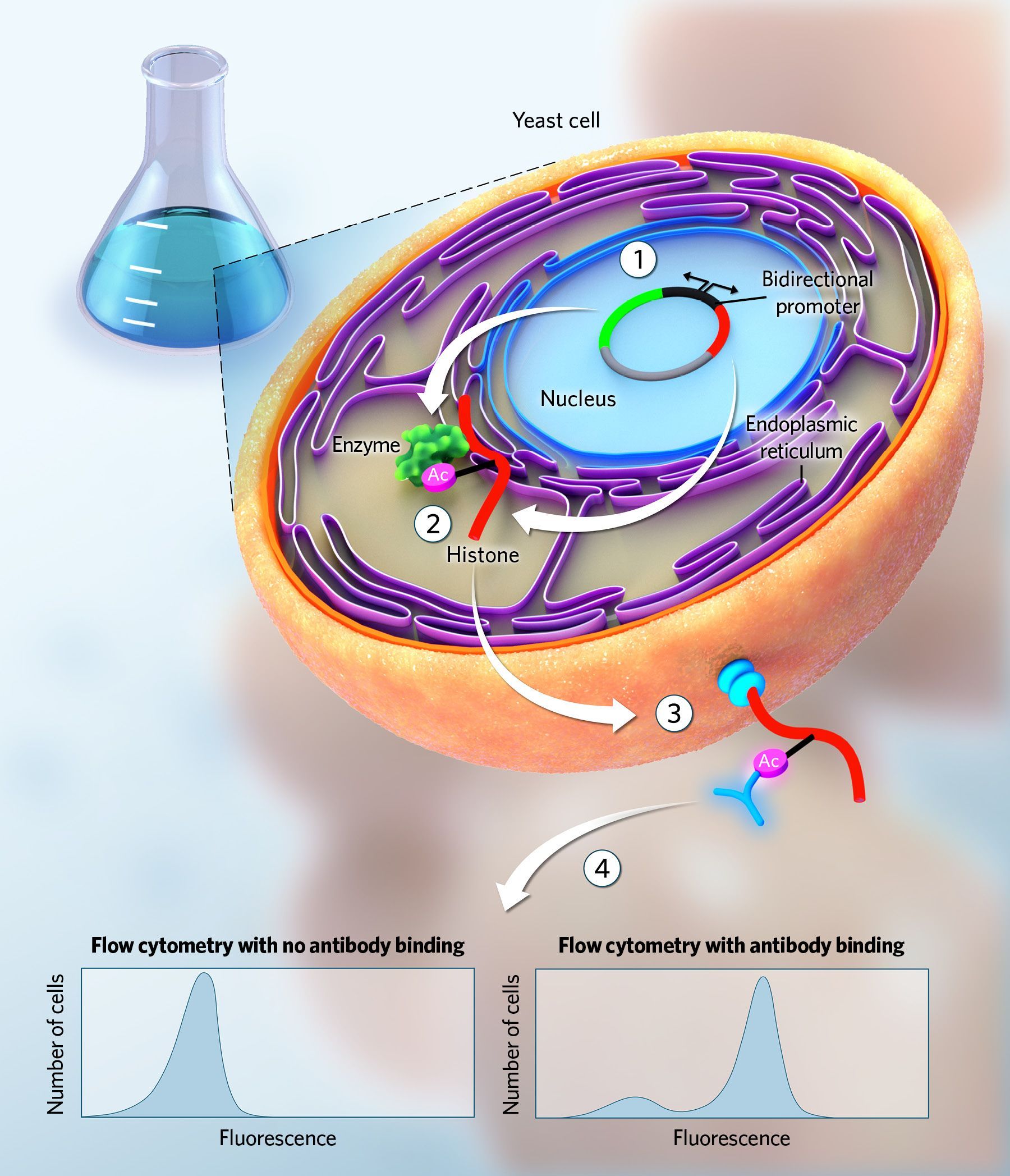 MINI LAB: To develop a new platform for studying histone modifications, North Carolina State University synthetic biologist Alison Waldman and colleagues created a speedy and cost-effective platform using baker’s yeast (Saccharomyces cerevisiae). Waldman inserted a plasmid that encoded a histone and an enzyme suspected of modifying it into the nucleus of a yeast cell. The plasmid also contained a bidirectional promoter capable of synthesizing both the histone and the enzyme simultaneously (1). Thanks to genetic tags transcribed with the mRNAs, both proteins migrate to the cell’s endoplasmic reticulum (ER), where the enzyme modifies the histone at specific residues (2). Then, thanks to a unique quality of the yeast known as surface display, the modified histone is presented on the cell’s exterior (3), where researchers can apply antibodies that label acetylation at specific residues to reveal where the enzyme modified the histone (4). WEB | PDF
© nanoclustering.com

Into the yeast nuclei, Waldman inserted plasmids with genetic instructions to simultaneously produce a histone and the well-studied histone modifier p300, which acetylates a lysine residue called H3K27ac on the histone protein H3. The p300 and the histone migrated to the endoplasmic reticulum (ER), where the enzyme did its work, and the modified histone was conveniently presented for identification. The idea, Waldman says, would be to use a plasmid encoding a putative histone-modifying enzyme in need of characterization.

“It’s a really interesting and neat approach that I would agree is completely different from other ways people have studied histone modifications,” says Brian Strahl, a chromatin biologist at the University of North Carolina who was not involved in the study. “One can link an enzyme that you don’t know much about to a histone, and within short order, you can determine what sites of acetylation [or other modifications] the enzyme may be mediating.”

Waldman also used the yeast to validate a panel of commercial antibodies marketed for testing residues on H3 and H4. A big issue in the field, both Waldman and Strahl say, is that lab-generated antibodies often don’t work the way they’re supposed to. In her assay, Waldman confirmed that nine antibodies bound as expected, but two did not.

Lastly, as part of an exploratory experiment, Waldman identified crosstalk between residues—that is, she found sites on H3 and H4 that needed to be acetylated before other sites could be, hinting at how interactions between residues might regulate transcription.

Waldman says that the platform could probe other histone-modifying enzymes including RNA polymerases, methyltransferases, kinases, or even those that add serotonin groups to histones. Strahl adds that he would also be interested in studying nonhistone targets of enzymes such as p300. Researchers currently lack a full catalog of enzymes and the genes they modify. Screening more broadly for other targets using yeast, Strahl says, would “expand the system in a way where you can really break the field open.”

Correction (September 17): A former version of this infographic showed the enzyme and histone in the nucleus. The illustration has been updated to avoid indicating that the proteins are produced there. The Scientist regrets the error.