Cancer cells have the ability to connect to and feed off of neurons in the brain, according to three studies published in Nature on Wednesday (September 18). The findings may explain why certain brain cancers are so difficult to treat and could lead to new cancer treatment methods.

Two of the studies are on brain cancers called high-grade gliomas. The third focuses on breast cancer cells that metastasize to the brain. The researchers found that the cells in these tumors can form what are essentially synapses, or connections between neurons.

Tumor cells “are integrating into neural circuits in the brain,” Michelle Monje, a neurologist and neuroscience researcher at Stanford University who led one of the studies on glioma, tells NPR. “The cancer cells themselves are promoting the neuronal activity that then feeds back to drive the growth of the cancer.”

“Our first reaction was, ‘This is just difficult to believe,’” Frank Winkler of University Hospital Heidelberg, who led the other glioma study, tells Nature. At first, his team thought the tumor synapses were a chance occurrence, but they consistently found the connections in glioma samples from cancer patients, cells grown in culture, and tumors transplanted into mice.

This could explain why gliomas behave in ways that have puzzled experts. Instead of forming a large mass, the cancer tends to intertwine throughout the brain, which makes it hard to remove. “If this is broadly applicable across more cancers, then it’s not necessarily surprising why it has been so challenging to treat cancers in the brain,” Johanna Joyce, a cancer biologist at the Ludwig Institute for Cancer Research at the University of Lausanne in Switzerland, who did not participate in the work, tells Nature.

The surprising finding of these three studies “adds to an expanding knowledge base about the parameters of metastasis that we hope will be applicable to prevention and therapy,” Douglas Hanahan of the Swiss Federal Institute of Technology Lausanne says in a news release. His team conducted the experiments on breast cancer. Some potential treatments have started to be identified; according to NPR, Monje’s team has found that the anti-epilepsy drug perampanel, which blocks some neuronal signals, reduced glioma growth rates in mice.

One of the keys to successful treatment will be to target connections formed between neurons and cancer cells without wiping out preexisting connections between neurons. “Honestly, I think it will be really tough,” Lisa Sevenich, a brain cancer researcher at the University of Frankfurt, who was not involved in any of the studies, tells Nature. “If those cells take over certain circuits that are already there in the brain, it will be difficult to be selective. But my fingers are crossed.”

See “Glioblastoma on a Chip” 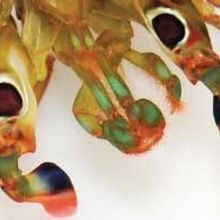