In the early 2000s, archaeologists working in modern-day Syria unearthed the complete skeletons of 25 horse-like animals in a spectacular burial complex that also contained human skeletons along with gold, silver, and other precious materials. The 4,300 year-old tombs were in the ancient Mesopotamian city of Umm el-Marra.

Many of the equids had apparently been killed, perhaps sacrificed, before burial. Their bones were different in shape than those of horses, donkeys, asses, and other modern equids. For years, researchers questioned whether these could be the remains of kungas, powerful horse-like hybrids highly prized by the Mesopotamians and mentioned in various written records.

Genetic analysis has now revealed that the equid skeletons discovered at Umm el-Marra were indeed hybrids, almost certainly the fabled kungas, making them the earliest-known hybrids bred by humans. The researchers behind the study, published today (January 14) in Science Advances, also identified which species the Mesopotamians probably bred together to produce kungas thousands of years ago, something that has long remained uncertain.

But when Eva-Maria Geigl, a paleogeneticist at the Institut Jacques Monod in Paris, and her colleagues first began work on the Umm el-Marra equid bones, they realized they were in for a challenge. 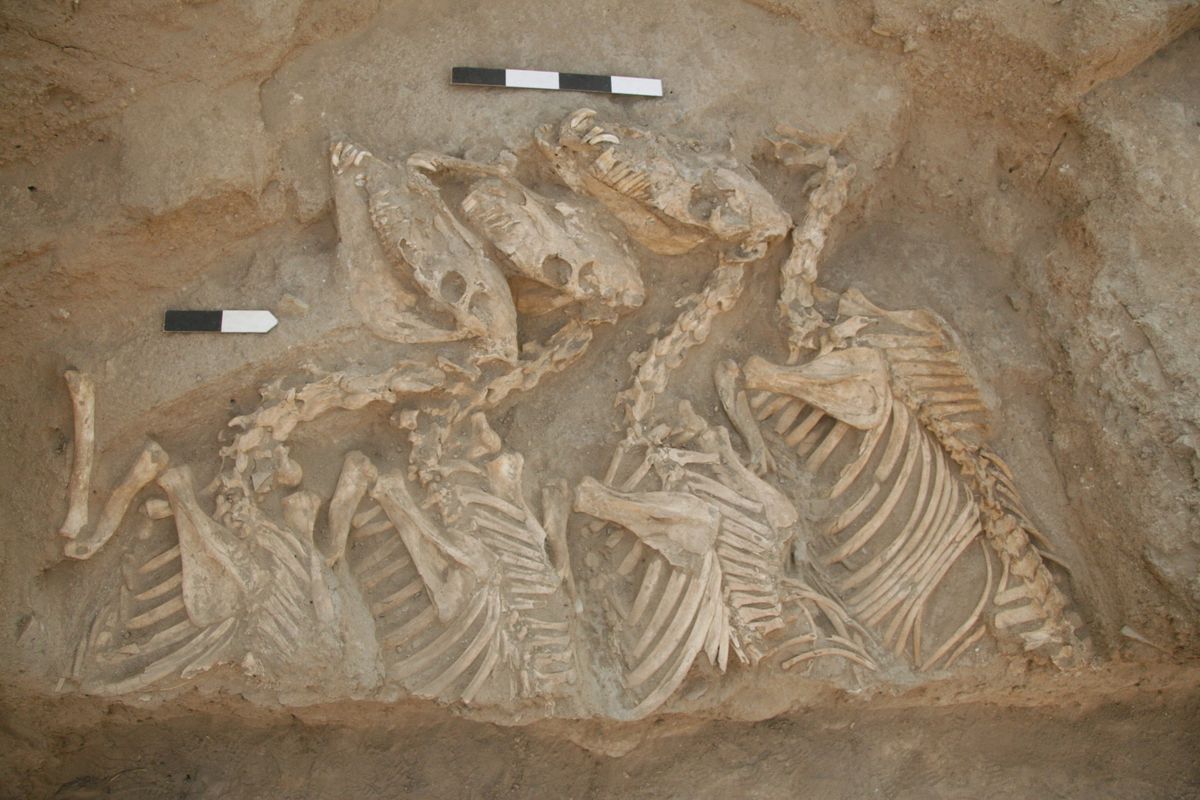 “It was clear we would have a hard time because they were already like chalk,” she explains. Thousands of years buried in hot, dry Syrian terrain meant that very little DNA had survived. The team turned to shotgun nuclear DNA sequencing, which analyzes fragments of DNA and stitches the sequences together to generate a larger sequence, and targeted PCR analysis, which picked out highly informative sites in the mitochondrial and nuclear genomes for investigation. Using this approach on samples from six of the Umm el-Marra equids, the researchers analyzed mitochondrial genes, which come from the mother; and Y-chromosome genes, which come from the father.

This yielded enough data from two of the six equids to reveal that the mitochondrial and Y-chromosome DNA clearly contained genes from two different types of equid, the researchers write in their paper. The mitochondrial DNA came from donkeys while the Y-chromosomes were from one of a group of equids called hemiones—in this case, likely Syrian wild asses, also known as hemippes. But this result was based on just a small amount of DNA and did not prove that the equids from the tomb were first-generation hybrids, with genomes inherited from a mother and father of two distinct species.

The most recent Syrian wild asses—the last living specimen died in a zoo in Vienna in 1927—were quite small animals, measuring about 1 meter tall at the shoulder, while the kungas from Umm el-Marra were 1.3 meters tall at the shoulder. Based on ancient remains, however, scientists had previously supposed that the more modern animals were dwarfed descendants of the older hemippes.

To verify their initial findings, the team turned to comparisons of whole genomes, an approach that only became affordable for studies of this kind in the last ten years, says Geigl. Despite the fact that the best sample from any of the Umm el-Marra equids contained just a tiny fraction of the animal’s original genome, the team was still able to detect thousands of single nucleotide polymorphisms (SNPs) in the DNA. This allowed them to compare the genomes of various equids—including horses, donkeys, and different wild asses such as Persian onagers from Iran, kiangs from Tibet, and khulans from Mongolia—to the Umm el-Marra equids. “In all analyses, the results for the [Umm el-Marra] equid illustrate an intermediate position between the donkeys and hemippes,” the paper notes. A phylogenetic tree constructed by the researchers also suggested the Umm el-Marra equids were half-donkey, half-Syrian wild ass, supporting the hypothesis that they were first-generation hybrids of these two animals. “It was very nice that we could solve this mystery,” says Geigl.

The analysis relied on genomes recovered from some of the last-surviving Syrian wild asses and one ancient Syrian wild ass genome from an 11,000 year-old specimen found at the Göbekli Tepe Neolithic archaeological site in modern-day Turkey. ”The Syrian wild ass at the time, prehistoric times, was much larger,” explains Geigl. The authors note how their study backs up previous research suggesting that the smaller, more recent Syrian wild asses were likely dwarfed forms, with taller individuals being the norm for this species in ancient times.

Capturing Syrian wild asses, given that they were very fast, undomesticated animals, would have been very difficult for ancient breeders. “This would explain why these kungas were so expensive and prestigious,” Geigl says. In ancient texts, kungas are described as costing up to six times as much as a donkey. They were also listed in dowries for royal marriages and were used to pull chariots belonging to members of the elite.

They were prized as war animals, too. A 4,600 year-old artefact called the Standard of Ur, a wooden box found in modern-day Iraq with inlaid depictions of war and peace, includes images of kungas pulling battle chariots and trampling enemies in the process. 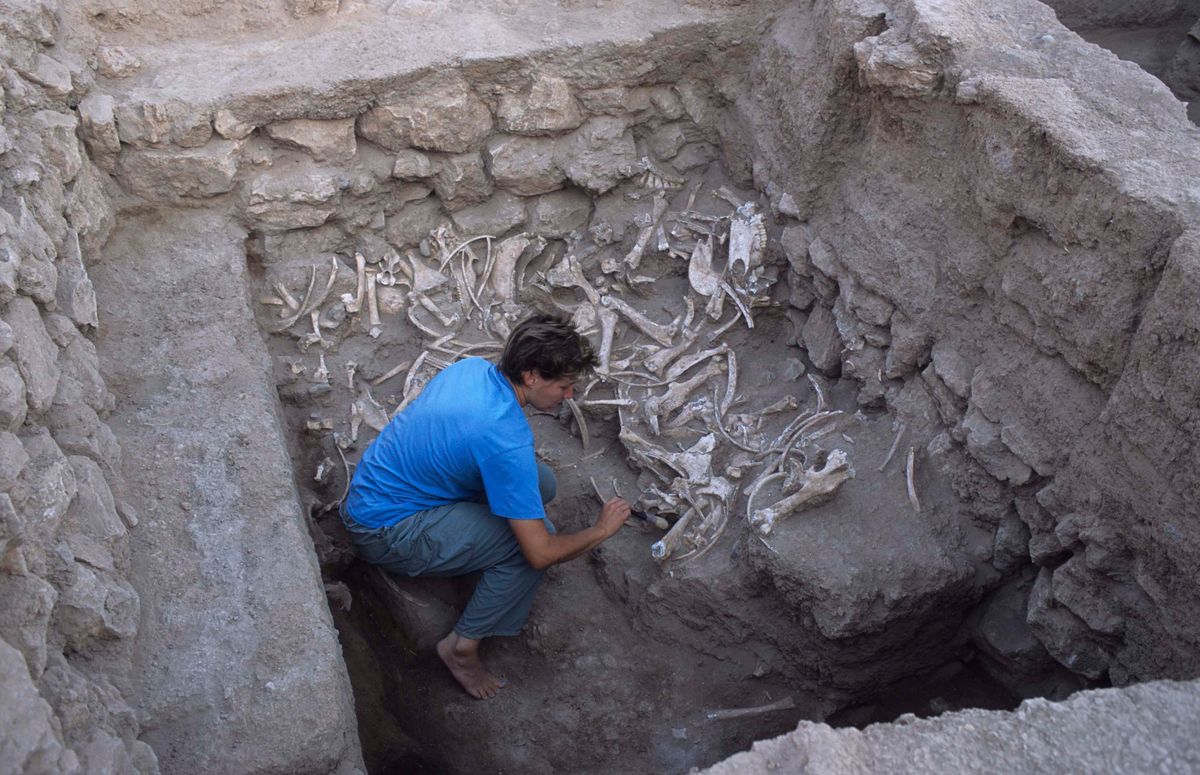 In ancient texts, the word ANŠE.BARxAN, written in cuneiform script, is used to refer to kungas. But for thousands of years, no one has known exactly what sort of animal this was, says Ludovic Orlando, an evolutionary geneticist at the French National Centre for Scientific Research (CNRS) who was not involved in the study but who helped to develop a technique used in the work. (CNRS provides some funding to the Institut Jacques Monod.)

Modern genomics has seemingly revealed the precise meaning of that enigmatic term at last, he notes: “I think this is quite a cool finding for that reason.” He also says that while the researchers had access to just a small amount of DNA from the Umm el-Marra specimens, there was enough to make a “robust” finding and determine that the parents of these hybrids really were donkeys and Syrian wild asses.

“These are things that are genetically very different,” helping to verify the result, he notes.

Pauline Hanot, an archeobiologist also at CNRS who did not participate in the new work, has studied later examples of horse burials and says she’s curious about what more we could learn about kungas from studies of their bones.

“The shape of their bones is probably completely different from other species, but it’s not something which is very well known,” she explains. The internal structure, in particular, might reveal more information about how fast and strong these animals were.

And she agrees with Geigl that the study reveals how valuable equids were, in general, to ancient societies, given how difficult it must have been to breed the now-extinct Syrian wild asses.

“It is really the illustration of how equids were important in these past civilizations,” she says.