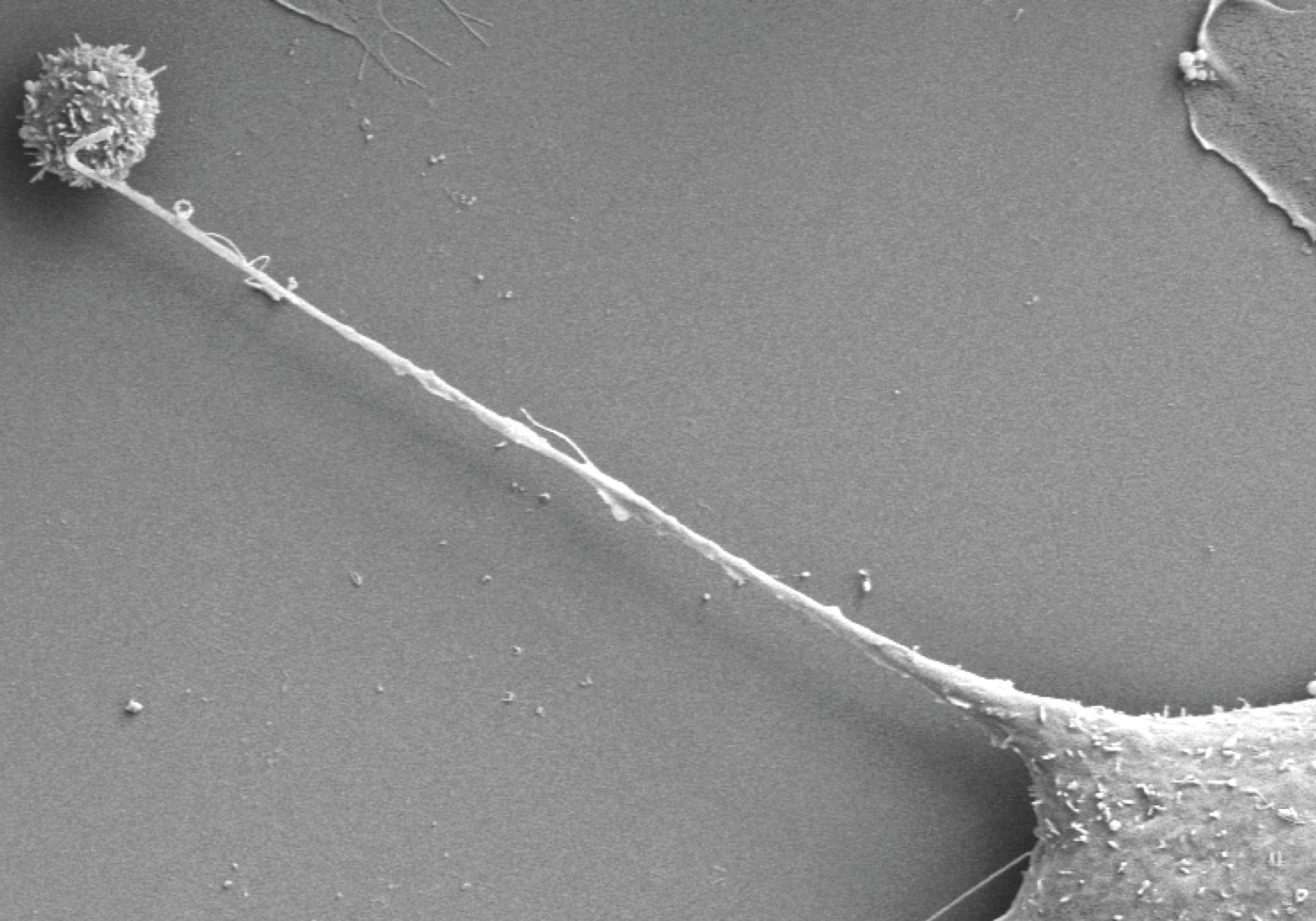 Cancer cells send out nanotubes to suck mitochondria from immune cells, finds a November 18 study in Nature Nanotechnology. The pilfered organelles allow the cancer cells to replenish their power while weakening T cells—a finding that could lead to new avenues for assailing tumors.

“It’s surprising that the transfer of mitochondria happened between different cell types, intriguingly between immune cells and cancer cells,” writes cancer biologist Ming Tan of China Medical University in Taiwan, who was not involved in this study, in an email to The Scientist. While researchers have observed mitochondrial transfer between cells before, most cases occurred between two cells of the same type. “Moreover, the mitochondrial transfer appears to have a significant impact on tumor cells escaping from immune surveillance,” Tan adds. “This is exciting because [of] its potential therapeutic implications.”

Shiladitya Sengupta and colleagues at Brigham and Women’s Hospital and MIT, including co-corresponding author Hae Lin Jang, stumbled across the behavior of these nanotubes as they were taking a broader view of cancer dynamics. “What we are trying to do is build a model system to study how cancer cells and immune cells interact using tools from nanotechnology, going into resolutions not possible with light microscopy. […] And we saw these tubes.” Further investigation with field-emission scanning electron microscopy revealed a range of these tiny connectors, from 3 to 100µm in length and 50nm to 2µm in width, between cultured mouse and human breast cancer cells and mouse T cells. 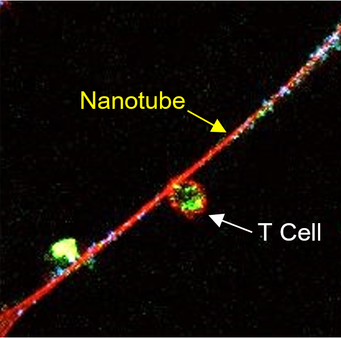 To determine what cargo passes through the tubes, Sengupta and colleagues labeled mitochondria with MitoTracker Green and amine-containing molecules in the cytoplasm with CellTrace Far Red. While some cytoplasmic proteins slowly moved between cells, mitochondria travelled much faster. “Mitochondrial trafficking was also more unidirectional: About 90 percent of traffic is from the immune cell to the cancer cell,” says Sengupta. “Clearly, the fact that mitochondrial trafficking is faster means that it is an active process that is happening.”

The team also found that cancer cells grown in culture with T cells consumed about twice as much oxygen as the same cells grown by themselves, indicating that mitochondria pilfered from the immune cells gave the cancer cells a metabolic boost. Meanwhile, the cocultured T cells’ respiration was about half that of T cells grown alone. “The idea that [cancer cells] can coopt local immune cells and borrow mitochondria and deplete them . . .  is very remarkable,” says oncologist Emil Lou of the University of Minnesota Medical School, who was not involved in the study. “This study opens up the possibility that the cancer cells are . . . not only not allowing immune cells to have an anticancer effect but borrowing from them and thriving even more because of the immune cells, through the nanotubes.”

Tan writes that he wonders whether cancer cells might be stealing other forms of cargo from immune cells deployed to combat the rapidly dividing invaders. “It would be interesting to know what other organelles or other cellular materials beside mitochondria can be transferred through nanotubes, and what their impact on cancer cells and immune cells [may be].”

Currently, no specific inhibitors are available to block the formation of nanotubes. So, to test how inhibiting mitochondrial transfer affects cancer cells, the researchers inhibited Ras/Rho GTPase signaling instead, which provides the “fuel” for the formation of nanotubes. Indeed, the inhibitor stopped nanotubes from forming in a culture of cancer and immune cells, though it likely had other impacts on both the cancer and immune cells as well, as Ras/Rho GTPase signaling is involved in regulating of gene expression, cell cycle progression, and cell migration.

When the researchers injected the inhibitor alone into mouse models of human breast cancer, however, tumor growth was not reduced. The scientists did observe a reduction in growth when the Ras/Rho GTPase inhibitor was combined with a PD1 inhibitor, an immunotherapy drug that blocks cancer cells from “silencing” immune cells. Sengupta points out that not all patients respond to such drugs now. “Maybe in those patients, the tumor is sucking the mitochondria out and shutting [the immune cells] down. . . . If I can prevent that, I’d get more immune cells in the tumor, and that’s the goal.”

Sengupta writes in an email that he and his colleagues at Brigham and Women’s are developing more-specific inhibitors of nanotube formation, and have filed a patent. Sengupta also cofounded Akamara Therapeutics and Invictus Oncology, both of which are actively pursuing immune-based cancer therapies.

Lou says the hypothesis that the Ras/Rho GTPase inhibitor’s tumor-shrinking effect in mice comes from preventing nanotube formation needs more robust support. “That the exact effect that occurred in the mouse model . . .occurred because of nanotubes is difficult to say based on the data provided,” he says, adding that although he regards the study as “very in-depth,” it lacked compelling, in vivo evidence of nanotubes forming in tumors.