Conventional wisdom suggests that evolution is driven by mutations that randomly occur throughout an organism’s genome, and that those that make the organism better at surviving or reproducing are then propagated thanks to natural selection. However, a new study cements the countering idea that the process of mutation isn’t evenly distributed across genomes. The work, published in Nature on January 12, finds that there’s a discrepancy in the rates of mutations among genes in the model plant Arabidopsis thaliana. Specifically, genes playing a crucial role in survival and reproduction mutate far less often than those that are less important.

Arabidopsis is a small flowering plant that has a comparatively small genome, making it a popular system for genetic research. The study, which began at the Max Planck Institute for Biology in Germany and was carried over to University of California, Davis, when lead author and plant scientist J. Grey Monroe got a job there, finds a 58 percent lower mutation rate within genes than in the areas of the genome around them. On top of that, genes considered essential had a 37 percent lower mutation rate than those in which modifications would be less likely to prove disastrous.

Mutations are distributed in a way that seems to be beneficial to the plant, Monroe tells The Scientist. The finding is “part of an ongoing movement that’s been happening since we started being able to sequence DNA,” which challenges the idea that mutations are equally likely throughout the genome and clarifies how evolution occurs, Monroe says. He adds that his paper is the first comprehensive analysis in a eukaryotic species that connects the mechanisms driving the variability in mutation rate at the cellular level with the finding that more important genes seem protected from mutation. It also clarifies and reinforces earlier studies that indicated nonrandom mutation rates, but whose results were less clear-cut or obtained with older techniques.

Monroe and his colleagues found evidence of specific epigenetic characteristics such as cytosine methylation that prevent mutations from occurring in those regions, not unlike protective barriers. These structures and the variability in mutation rates within a single organism’s genome, Monroe says, suggest that “evolution created mechanisms that changed how evolution works.”

Scientists have been demonstrating that mutations don’t occur randomly for nearly a century. Monroe, then, isn’t the first to show a mutation bias—previous studies to do so include a Journal of Molecular Evolution paper from 2005 demonstrating an increased mutation rate out near chromosomes’ telomeres, a 2011 publication in Nature Reviews Genetics suggesting the existence of a mutation bias across the human genome, and a 2012 review in BioEssays that suggests organisms may develop higher mutation rates in areas of the genome where changes would be most advantageous. With methodological improvements and a thorough epigenetic analysis, Monroe’s team added another piece to the puzzle. 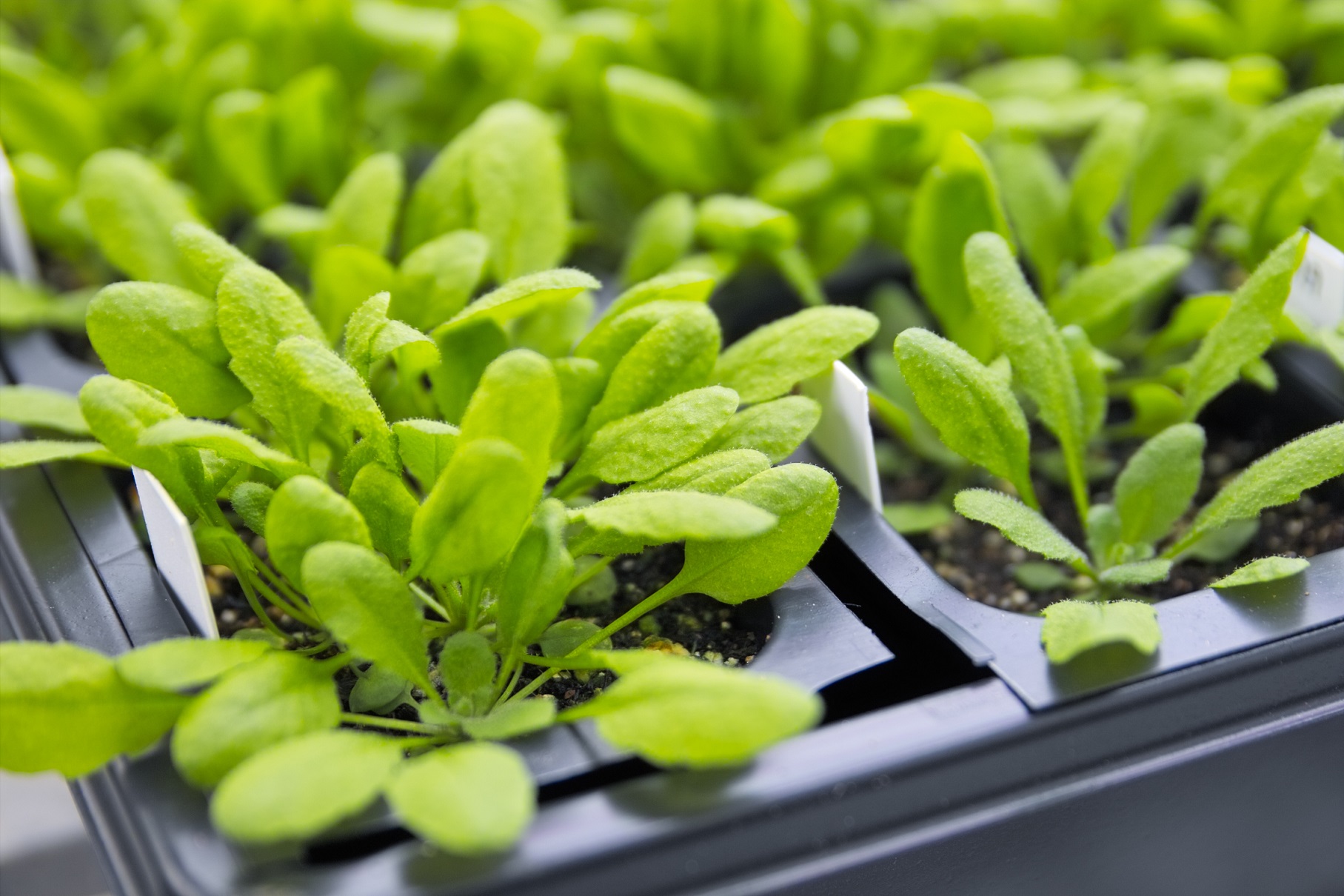 “It’s a nicely done paper,” University of Bath evolutionary geneticist Laurence Hurst, who didn’t work on the study, tells The Scientist. He says that it provides an important next step, a reinforcement of earlier findings using newer, better technology, in a long history of mutation research. However, he questioned the paper’s novelty for the same reasons. He tells The Scientist that a 2004 paper in PLOS Biology that wasn’t cited in the new study demonstrated the same concept—a lower mutation rate among essential genes—that Monroe and his team did this month.

Monroe and his team ran mutation accumulation (MA) lines, in which organisms are separated from one another and carefully inbred across multiple generations, and the genomes of all individuals are sequenced and scrutinized for changes. The technique became possible with the advent and increasing accessibility of high-throughput gene sequencing and allows researchers to pinpoint small and uncommon mutations with greater precision and ease than prior techniques. It also minimizes the extent to which organisms—protected from predation and resource scarcity, and bred artificially—are subject to natural selection. The new work represents a methodological upgrade over the 2004 paper, which relied heavily on modeling, Hurst says, adding that the new study serves as “the sprinkling on top” of the rest of the field’s body of work.

A major part of the study involved making sure that the researchers were observing the genuine mutation rate—something that Hurst says remains difficult even with the field’s best techniques and tools—instead of the effects of natural selection. To do so, the team sequenced multiple Arabidopsis plants and their offspring for 8 to 25 generations each, allowing even unhealthy plants to grow. They also included multiple siblings from each generation in their MA lines so as to observe these changes before selection could act on them.

The researchers also checked for the possibility that mutations within essential genes weren’t actually less common and merely appeared to be because they prevented seeds from growing or forming in the first place. Such a “survivorship bias,” Monroe says, would weaken the paper’s conclusions. So the study’s authors calculated mutation bias among silent mutations, which don’t result in functional changes and still encode the same amino acid sequence as before when new proteins are synthesized. The effect, the paper shows, is still present among silent mutations as well as non-coding gene regions called introns, suggesting that the different mutation rates “is best explained by a genuine mutation difference” and not selection, Monroe says.

To find out how these variations in mutation rates emerge, the team quantified reversible epigenetic features such as the proportion of cytosines that were methylated—a modification that makes the base prone to lose an amine group, changing it into thymine—and how this proportion relates to mutation frequency. They also conducted an ATAC-seq experiment, which quantifies chromatin availability throughout the genome, and found that chromatin that was more accessible rather than tightly wound or bound to histones had impaired nucleotide excision repair, meaning it wasn’t able to readily fix damaged DNA. Both DNA accessibility and cytosine methylation were correlated with higher mutation rates, while other regions mutated less—an effect that Monroe suspects may be protective against harmful changes.

Monroe says that the biggest takeaway from the work is that it challenges the notions that mutation is random and that evolution is directionless—a conclusion that he says prompted pushback.

Indeed, the paper has drawn criticism from experts in the field, multiple researchers tell The Scientist, but very little of that had to do with the study’s evidence and findings. For example, one researcher responding to the work on Twitter simultaneously praised the paper while criticizing its definition of randomness, while another explicitly pushed back to insist that mutational signatures are random.

“Yes, much of the [controversy] was around whether the findings in the study challenge whether mutations are ‘random,’” writes Inigo Martincorena, a molecular biologist studying mutation at the Wellcome Sanger Institute in the UK who was not involved in the study, in an email to The Scientist. “The answer is, ‘it depends on your definition of random.’ The authors show quite convincingly that mutation rates vary across the genome and that particularly-important regions of the genome have lower mutation rates (before the action of selection).”

For his part, Monroe says that the paper’s findings shouldn’t be considered controversial, since evolution doesn’t necessitate that mutations are random, just that “mutations happen and then selections happen on them.”

Meanwhile, scientists disagree on why the mutation bias emerged. Monroe suggests there’s an evolutionary benefit to blocking mutations in essential genes. But in a commentary on the paper in Nature, University of Michigan evolutionary biologist Jianzhi Zhang, who didn’t work on the new study, argues that the predominant driving force is likely something other than natural selection. He says that the study’s results seem valid, but he’s less convinced by the authors’ hypothesis for why mutation bias emerged.

Hurst shares a similar sentiment, proposing a variety of alternate hypotheses. For instance, he cites research on cancer genomes published in Nature Communications in 2012 demonstrating that the order in which genetic domains replicate during mitosis correlates with their mutation rate. This confirmed an earlier report of a lower mutation rate in early replicating domains in humans that was published in Nature Genetics in 2009, Hurst explains.

“We have some evidence that early-replicating [genes] might be more important,” Hurst tells The Scientist, though he suggests that the process is unlikely to be selective. Instead, he suggests that cells may simply run out of available nucleotides by the end of the replication process and make do with what’s left, making errors more likely.

As researchers continue to improve genetic screening and sequencing technology, research such as Monroe and his team’s work on epigenetic structures should make it possible to finally arrive at conclusive answers to the myriad unanswered questions stymying the field. In the meantime, Martincorena says he hopes scientists will focus on three key questions that, so far, have eluded the field.

The first two are straightforward: whether mutation bias evolved to protect the genome or whether it was “just an accident of different repair activities in different epigenetic regions,” he says, and what the exact mechanisms driving mutation rate variation are. But Martincorena also says that as scientists learn more, key assumptions in genetic and evolutionary research may need to be revisited—he says researchers need to determine “what the impact of this variation is on our methods to study genome evolution,” as failing to account for mutation bias in research experiments may result in inaccurate models that place an outsize influence on natural selection to explain the emergence of new traits.

“For example, in cancer genomics, the variation of the mutation rate across the genome has been known and carefully studied for the last decade and this has been critical in understanding the origins of mutations in cancer and help discover new cancer genes,” Martincorena says, citing research on the origins of cancer mutations. “The evolution field is lagging several years behind the cancer genomics field on this topic.”