ABOVE: Hydra vulgaris viewed under a microscope © ISTOCK.COM, IVAN MATTIOLI

From salamander tails to deer antlers, the innate ability of some animals to regenerate lost body parts has captivated scientists for centuries and driven research into the molecular mechanisms of such healing in the hopes that humans might someday be able to do the same.

Even amongst regenerating organisms, hydras—not the mythical beasts, but aquatic animals in the genus Hydra—stand out for their ability to regrow any part of their body after it's lopped off, including their heads. Now, a study published last week (December 8) in Genome Biology and Evolution sheds new light on the genetic and epigenetic mechanisms that allow these animals to achieve this regenerative feat.

Hydra vulgaris are 1-to 3­-centimeter-long, tube-shaped, freshwater organisms that adhere to objects such as sticks and rocks and, much like their relatives the sea anemone and jellyfish, hunt using stinging tentacles. They are considered to be immortal. Unless something comes along and kills them, they will continuously replenish lost tissues and body parts. They can also clone themselves through an asexual reproduction process called budding in which a new hydra grows out of the original and detaches, “kind of like the way petals would come out” from a flower, University of California, Irvine, cell biologist Ali Mortazavi tells The Scientist.

Mortazavi led a team of researchers who set out to answer a long-standing question in the field: whether the genetic and epigenetic processes guiding reproductive growth and regenerative regrowth are similar. “It’s a very interesting question because it’s one of the mysteries of cnidarians in general: they have all these fantastic modes of reproduction, and the big question is, are they recapitulating some process? Is regeneration like budding? But we don’t really know so much,” says Chiara Sinigaglia, a developmental and evolutionary biologist at the Institut de Génomique Fonctionelle de Lyon who didn’t work on the study.

This mystery is “a question that people have been trying to address from different angles” for years, Sinigaglia adds. “It’s very tricky because you see the same genes used over and over” in both processes. 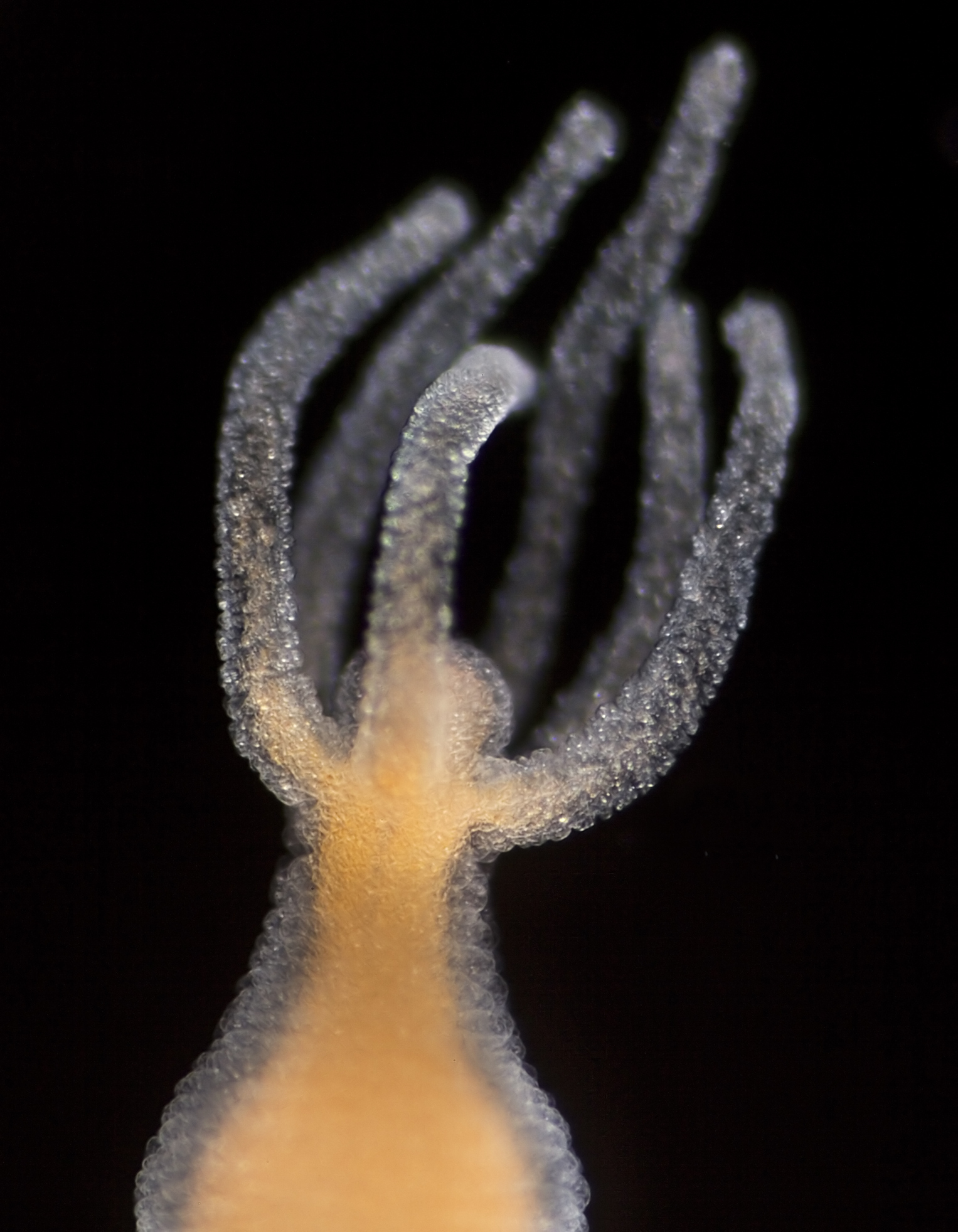 Typically, researchers studying Hydra vulgaris regeneration have focused on the activity of one specific gene or biological process at a time. For instance, research published in eLife in March highlighted the role of the Wnt signaling pathway in rebuilding a Hydra vulgaris’s mouth after decapitation. In contrast, Mortazavi and his colleagues took a more comprehensive approach, mapping out which genes were activated and upregulated at different points in time and in various tissues throughout the budding and regeneration processes.

The scientists conducted multiple experiments in which they decapitated the Hydra vulgaris to determine which genes were expressed as part of the head regeneration process. They also employed ChIP-sequencing, a technique that reveals epigenetic changes in the form of histone modifications, to determine which promoter and enhancer regions were actively upregulating the expression of different genes at various points in time for both regenerating and budding hydra. The team followed that up with ATAC-sequencing, a technique that identifies open-chromatin regions of a genome, to find out which genes were accessible to those candidate transcription factors.

For both reproduction and head regeneration, Hydra vulgaris rely on their head organizer, a cluster of 50 to 100 cells at the apical tip of the head that signals nearby cells to differentiate into either part of the head or the tentacles. When the head is cut off, the researchers found, a cascade of genetic and epigenetic activity rapidly triggers the growth of a new head organizer from whatever cells remain, allowing the Hydra to regenerate the rest of its head as well. The study identified hundreds of genes that are expressed differently in this process than in reproduction, as well as thousands of open-chromatin regions—candidate gene promoters and enhancer-like regions—that seem to be remodeled in response to injury in order to drive the regeneration process, creating a different genetic landscape than what exists during budding.

Those epigenetic changes and the dynamic modeling of enhancers and promoters seem to trigger genes at different points in time depending on which form of head generation the Hydra is undergoing, according to the study. Sinigaglia says one takeaway is “that the two processes converge on the same output—a little hydra complete with tentacles—but the trajectory, the time course, they are not really aligned.”

The study produced a dataset of unprecedented scale on the gene expression of Hydra regeneration and development. Harvard University evolutionary biologist Mansi Srivastava, who studies regeneration in worms and didn’t contribute to the new study, tells The Scientist that the real importance of the paper is in those datasets.

“This paper, it’s not giving us the exact answer, but it’s generating the raw material,” Srivastava says. “This is a powerful dataset that is part of this longer-term effort” to unravel regeneration.

“It is really an incredible resource for the hydra field,” agrees Blair Benham-Pyle, a cell biologist studying flatworm regeneration at the Stowers Institute for Medical Research who didn’t work on the study. “I think it’s great for hypothesis generation.”

As the March eLife paper indicated, a decapitated Hydra will quickly reassemble its mouth as a survival mechanism. Mortazavi speculates that same urgency is what drives the expression of some genes over others during regeneration. In contrast, a budding Hydra clone undergoing normal development doesn’t need to prioritize wound healing or survival, he says, and can progress at its own pace.

“Even though the processes are different, they still use the same developmental factors or genes, just in different ways,” lead study author and University of California, Irvine, evolutionary biologist Aide Macias-Muñoz tells The Scientist. “I think that’s because it’s easier to coopt things that are already doing something. They’re already being used in development to develop a head, so why not use similar things to develop a head again? But this is a different process because you need to do it very quickly and stop it at some point.”

However, the study can only go as far as identifying candidate genes and transcription factors and generating hypotheses about which ones drive regeneration, budding, or both, Srivastava notes. In order to test and confirm the genes’ roles, as well as those of the candidate promoters and enhancer regions, researchers will need to conduct functional knockdown or knockout studies, Macias-Muñoz explains.

Some of that work is already underway. Macias-Muñoz says she’s nearly completed follow-up research that supplements this bulk analysis with single-cell studies in hopes of learning how cells take on different roles in response to decapitation versus normal development. Single-cell analysis, she explains, will allow her to “better trace these connections that we have identified.”

Benham-Pyle is particularly interested in seeing single-cell studies that identify how individual cells of different types communicate with one another to contribute to the signaling cascades that set off budding versus regeneration—in particular, which cell types existing head organizers signal and recruit into head development.

The heatmaps and datasets generated by the new study provide an “important part of the story” of how regeneration first emerged in evolutionary history, says Srivastava.

Hydra has been part of that story for a long time: researchers first began studying its regenerative capabilities in 1744, when Abraham Tremblay first discovered the bizarre property. But other organisms have garnered more attention and detailed study, and many questions about Hydra regeneration remain unanswered.

Experts still don’t know whether regeneration is a shared ancestral feature that emerged in some ancient organism, or whether creatures such as Hydra, the worms studied by Srivastava and Benham-Pyle, mammals, salamanders, and others that can regenerate some or all of their lost body parts developed the capacity independently.

“It’s kind of nice that we’re seeing similarities across all these different organisms,” says Benham-Pyle, “because it makes it more likely that we might be able to leverage that biology to help humans.”