ABOVE: Purple microbial mats in the Middle Island sinkhole in Lake Huron. Small hills and “fingers” like this one in the mats are caused by gases like methane and hydrogen sulfide bubbling up beneath them.
PHIL HARTMEYER, NOAA THUNDER BAY, NATIONAL MARINE SANCTUARY

Billions of years ago, Earth lacked the oxygen-rich atmosphere that today sustains most life on the planet. How the air slowly became breathable remains an unanswered question, but in a study published yesterday (August 2) in Nature Geoscience, researchers are putting forth a novel hypothesis: that the gradually slowing rotation of the Earth, which led to longer days, allowed photosynthesizing cyanobacteria to pump more oxygen into the atmosphere than they had before.

“An enduring question in the Earth sciences has been how did Earth’s atmosphere get its oxygen, and what factors controlled when this oxygenation took place,” University of Michigan geomicrobiologist and study coauthor Gregory Dick says in a press release. “Our research suggests that the rate at which the Earth is spinning—in other words, its day length—may have had an important effect on the pattern and timing of Earth’s oxygenation.”

For billions of years, most life on Earth (largely single-celled microbes such as bacteria) breathed carbon dioxide. Cyanobacteria were some of the first organisms to develop photosynthesis, which involves taking in carbon dioxide and produces oxygen as a byproduct, and scientists have long believed that these microbes may have been involved in early oxygen production on Earth. But modeling studies were never able to reconcile how much cyanobacteria contributed to larger oxygenation events in the planet’s past, such as the Great Oxygenation Event (GOE) that took place 2.4 billion years ago and jumpstarted Earth’s shift to an aerobic atmosphere, nor could researchers discern why the first fossils of photosynthetic microbes are separated from GOE in the geological record by roughly a billion years.

In 2016, study coauthor Brian Arbic, an oceanographer at the University of Michigan attended a talk about cyanobacteria work being done by Judith Klatt, then a postdoc at the University of Michigan and now a biogeochemist at the Max Planck Institute for Marine Microbiology. Members of the two labs began chatting, and realized that these large changes in atmospheric oxygen corresponded with changes in how quickly Earth was spinning around its axis. Four and a half billion years ago, for example, the Earth spun faster, and a day was only six hours long. Two billion years later, around the time of the GOE—which bumped atmospheric oxygen from negligible amounts to 20 percent of today’s values, the Associated Press reports—the planet had slowed, and a day clocked in at 21 hours.

To determine how cyanobacteria might fit into this association between Earth’s spin and burgeoning oxygen in the atmosphere, Arbic, Klatt, and their colleagues went looking for cyanobacteria growing in an environment chemically similar to what Earth may have been like just before the GOE. They found it in Lake Huron, at the bottom of the 80-foot Middle Island sinkhole, where thick mats of cyanobacteria grow in an oxygen-poor environment and use sulfur, rather than sunlight, as an energy source. “We actually imagine that the world looked kind of like the Middle Island sinkhole for most of its history,” Klatt tells the AP. 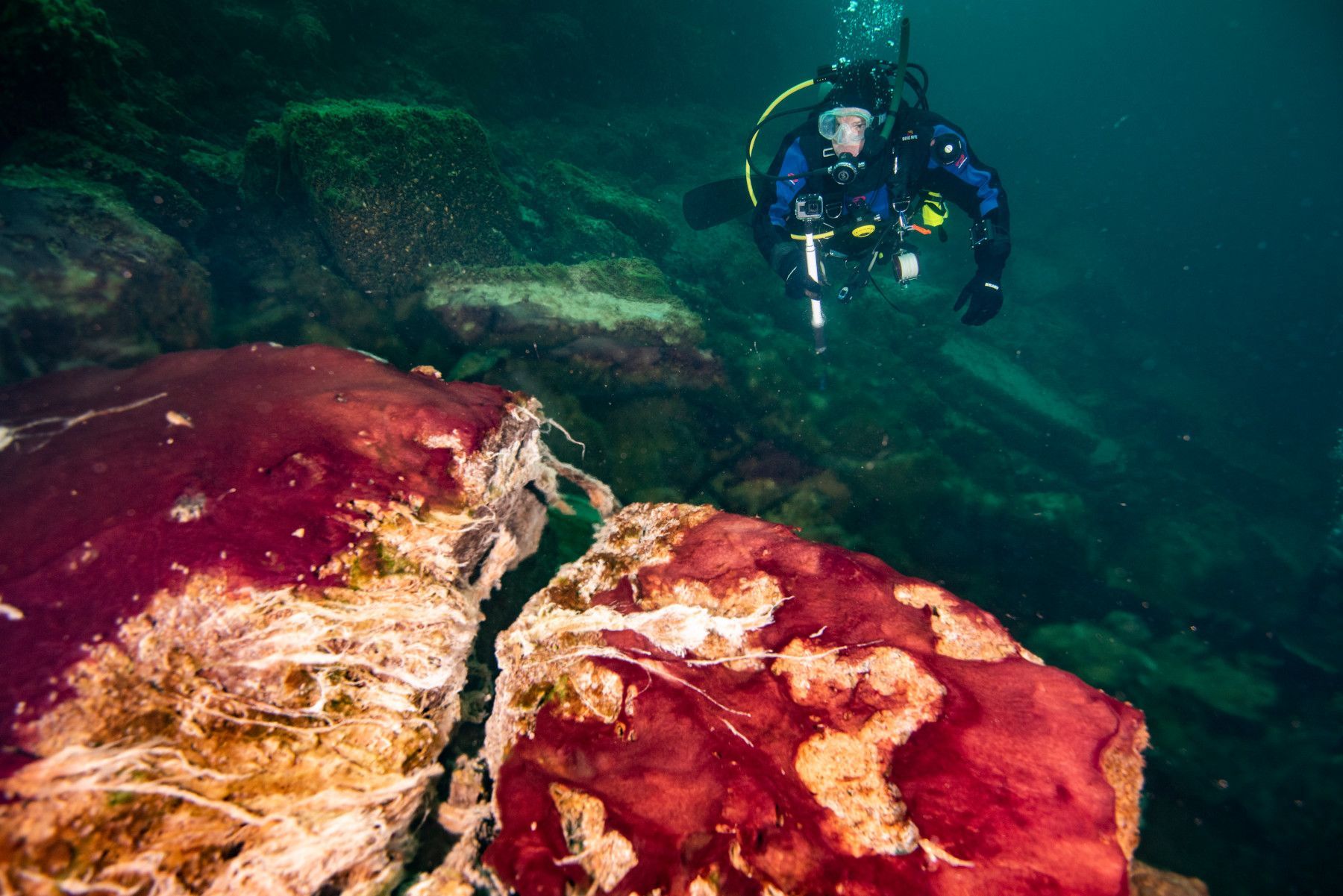 The researchers brought the mats into the lab, where they exposed them to light for between 12 and 24 hours. The longer the mats were allowed to photosynthesize, the more oxygen they released. By plugging the numbers into a model, the team calculated the amount of oxygen cyanobacteria could have contributed globally and linked that quantity to changes in day length. Both variables tracked with one another—the GOE, for example, corresponded with a day length of 21 hours that plateaued for roughly a billion years, until perturbations in the Earth’s spin caused in part by tidal friction and planetary interactions with the moon led to even longer days and a handful of subsequent smaller shifts in atmospheric oxygen levels, including the Neoproterozoic Oxygenation Event and Paleozoic Oxidation Event. Just like in the lab experiments, cyanobacteria were able to produce more oxygen than they consumed as the days stretched out.

“The rise of oxygen [on Earth] is easily the most substantial environmental change in the history of our planet,” Woodward Fischer, a geobiologist at CalTech who was not involved with the study, tells Science. The current work represents “a totally new flavor of an idea. It’s making a connection that people haven’t made before.”

Timothy Lyons, a biogeochemist at the University of California, Riverside, tells Science that this finding also helps explain that confusing gap between cyanobacteria fossils and oxygen buildup in the atmosphere. Because day length was still so short in the ancient past, the cyanobacteria were essentially consuming as much oxygen at night during respiration as they produced during the day. Longer days tipped that balance and allowed oxygen to build up. “Long daytimes simply allow more oxygen to escape to the overlying waters and eventually the atmosphere,” Lyons says.

Other researchers, such as Benjamin Mills, an Earth system modeler at the University of Leeds, say that other factors, such as changes in levels of oxygen-binding minerals from ancient volcanoes, may also have contributed to early oxygenation. Nevertheless, changing day length “is something that should be considered in more detail,” he tells Science. “I'll try to add it to our Earth system models.”