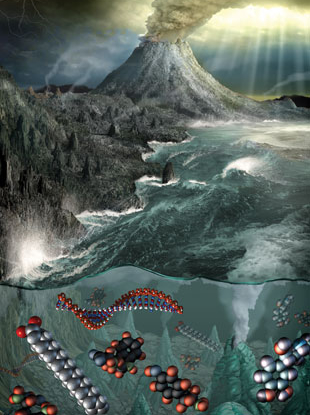 © KEVIN HANDOrigin-of-life researchers have traditionally been categorized into a “genetics first” camp, which ascribes to the notion that some sort of information molecule was a necessary prerequisite for life, and a “metabolism first” group, in which studies focus on understanding the chemical cycles that led to the synthesis of organic molecules. But in a paper published this week (March 16) in Nature, scientists presented evidence that both genetics and metabolism may have arisen simultaneously, via a reaction involving ?hydrogen cyanide and hydrogen sulfide, driven by ultraviolet (UV) light.

“This is a very important paper,” Jack Szostak, a molecular biologist and origin-of-life researcher at Massachusetts General Hospital in Boston, told Science. “It proposes for the first time a scenario by which almost all of the essential building blocks for life could be assembled in one geological setting.”

In 2009, John Sutherland of the Medical Research Council Laboratory...

Expanding on this system, Sutherland and his colleagues found that hydrogen cyanide, along with hydrogen sulfide and UV light, could spawn not just precursors of ribonucleotides, but also the building blocks of amino acids and lipids, the core components of proteins and fatty acids. The details of each reaction are slightly different, however, and all three of these components are not likely to have arisen in close enough proximity to spontaneously form some sort of proto-cell, Sutherland told Science. Other factors, such as rain, could have then brought the compounds together.

“This general scenario raises many questions,” Szostak told Science, “and I am sure that it will be debated for some time to come.”