Researchers have found that tau protein levels detected on brain scans of living people may serve as a biomarker of chronic traumatic encephalopathy, a brain disease that has been linked to repeated head trauma. Although years off, a diagnostic that uses such biomarkers could give patients a warning about the associated cognitive, mood, and behavioral issues they may endure, and perhaps give doctors a chance to levy interventions to ward off the symptoms of CTE, which is currently only able to be diagnosed by brain examinations postmortem.

In a study published Wednesday (April 10) in the New England Journal of Medicine, researchers at Boston University, a leader in CTE research, used positron emission tomography (PET) scans to assess levels of the tau protein in 26 living former NFL players who have started to experience cognitive difficulties and in 31 similarly aged male controls. They found that tau levels were higher, on average, in the NFLers, and that the longer an athlete had played the sport, the greater his tau levels.

“It’s an encouraging advance,” Gil Rabinovici, a neurologist and imaging expert at the University of California, San Francisco, who was not involved in the study, tells the Associated Press. “It’s hugely important to be able to detect the disease in living people.”

See “The Science of Head Trauma”

The team did not find any correlation between tau levels and the severity of the former football players’ current symptoms. This could be a result of the study’s small sample size, or the role of other biological factors in CTE. Boston University neuroscientist Robert Stern, who led the study, stresses to the AP that it will be many years before these results can be translated into clinical test for CTE.  “We’re not there yet.”

Alexander Powers, an associate professor of neurosurgery, pediatrics and orthopedics at Wake Forest School of Medicine who did not participate in the research, agrees. “Identifying the tau is just a first step,” he tells The New York Times.

Some of Stern’s coauthors work or consult for Avid Radiopharmaceuticals, a funder of the study that makes the tau-identifying tracers used in the scans. 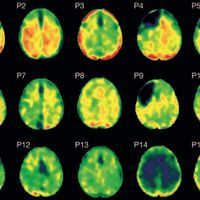