ABOVE: A North Atlantic right whale mom swims with her new calf on January 6, 2019. FLICKR, FWC FISH AND WILDLIFE INSTITUTE

Seven new North Atlantic right whale calves are swimming off the southeastern US coast, the Florida Fish and Wildlife Conservation Commission reports. Last year, no new babies were born, so the uptick in births this year offers a small amount of hope that the endangered species might pull itself back from the brink of extinction.

“The signs are better than they were last year or the year before, but we’re not out of the woods yet,” Philip Hamilton, a research scientist at the New England Aquarium’s Anderson Cabot Center for Ocean Life tells The Scientist. Often, the media coverage of the calf count, especially in a year like this when there are several new babies, can lead to the idea that everything is fine...

The last year new calves tallied anywhere near that number was in 2015, when 17 calves were born, and the last really big year for new births was in 2009, when 39 calves were born. Since then, though, the number of new calf births has steadily declined each year, while the number of deaths of North Atlantic right whales (Eubalaena glacialis) has slowly increased, with a record high of 17 reported deaths in 2017 and three reported deaths in 2018.

Altogether, from 2017–2019, there have been 20 deaths and 12 births. “We haven’t even broken even on number of dead whales with new births, and that is what the last decade or so has been trending towards,” notes Jen Jakush, a researcher with the Conservation Commission’s Fish and Wildlife Research Institute who helps count newborn right whales.

Reported deaths don’t represent the total right whale deaths each year; some researchers say that only a third of deaths are documented. So if deaths continue to increase and births decrease, the population, which is at roughly 450 North Atlantic right whales, could be gone in under two decades.

“The population is definitely in decline,” Jakush says.

Average birth rates, Hamilton explains, are lower because females aren’t having calves as often as they normally do. A healthy female typically has a calf every three to four years. But lately, there’s been a 9-to-10-year gap between calves for many of the females in the population.

As with many other mammals, females tend not to have calves when they aren’t healthy, and they might not be healthy because they are not getting enough to eat, a result of their feeding grounds being disrupted by climate change, Hamilton says. The whales used to dine east of Cape Cod or in Canada’s Roseway Basin and Bay of Fundy. The productivity of plankton, which are the whales’ main source of food, has gone way down in the Bay of Fundy, so scientists are trying to understand whether the whales are still going there, or if they’ve found other places to eat. In the last few years, a popular dining spot has emerged a bit north of the Bay of Fundy in the Gulf of St. Lawrence.

“We’re not sure yet if they’re going there because it’s a good restaurant,” Hamilton says, “or the only restaurant that’s open.” 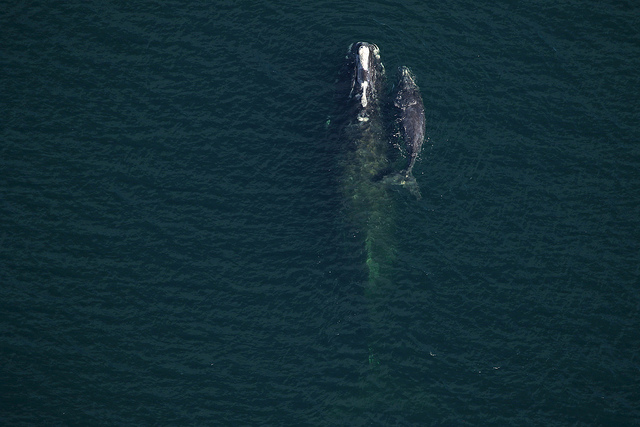 This mom and calf were the first pair spotted in the 2018–2019 breeding season.
FLICKR, FWC FISH AND WILDLIFE INSTITUTE

Either way, four of the seven new moms who gave birth were spotted feeding in the Gulf of St. Lawrence a few months ago, suggesting it’s got the right amount of food to allow them to be healthy enough to get pregnant and give birth.

When it comes to having calves, injuries are also an issue. Right whales can get caught in ropes and other equipment used for fishing and crabbing, which can get caught in their mouths and wrapped around their bodies, making it hard to eat and causing massive wounds that take time to heal. Getting tangled in the ropes causes the whales’ stress hormones to shoot up, and as a result, some females can become too stressed to reproduce. Some never reproduce again, Hamilton explains, referencing data that are still under peer review.

Another concern related to the whales’ health is seismic airgun blasting. The federal government has approved permits for five companies to use the blasting technique, which compresses and then explosively releases air every 10 seconds or so for hours, to probe the ocean floor for oil and gas in the waters the whales swim through to migrate north to find food. The blasts release loud sounds, which make it harder for the whales to communicate, say, for a mother whale to find her newborn baby.

Still, there are a few positive signs from this year’s moms. It was the first year in a while that a female who hadn’t ever had a calf before gave birth. In 2017, when fives calves were born, none of those moms were first timers. “I’m happy about the fact that this year one of the seven moms was a new mom,” Hamilton says. And, at least one of the moms is having calves every three to four years. “It’s that tender hope of wondering, ‘are they going to make it?’”

As for the calves, researchers probably won’t know if any of them are females until later this year, when they analyze the genetic samples taken from them. That’s unless scientists get lucky and the calves are playing and role over to expose their genitals.

The genetic samples offer more information about the animals than just their sex. The data help the researchers track which moms and calves make the trek north to feed in the next few months and can also help identify each new whale’s father. And, because scientists have genetic samples from many whales in the population, Jakush says, the DNA also helps determine which ones wash up dead on the beach, when it happens.