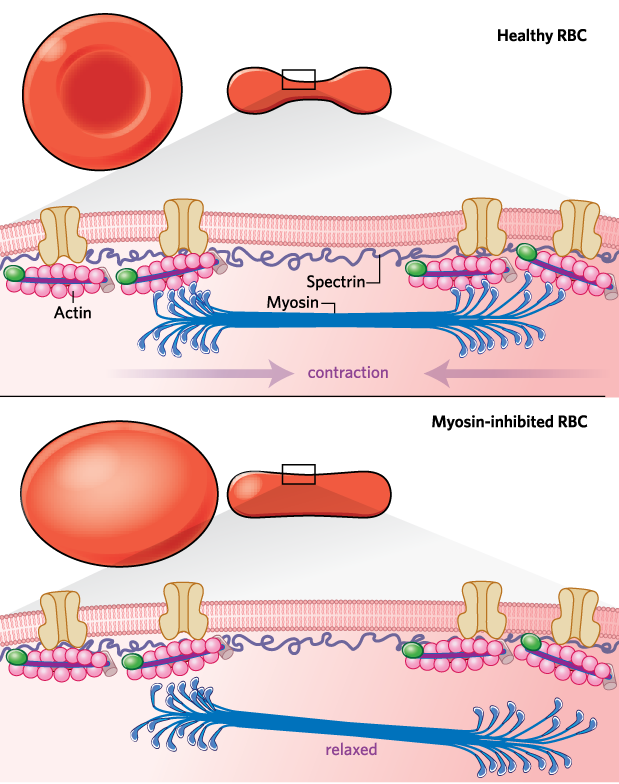 IN A PINCH: In healthy red blood cells (RBCs), myosin fibers (blue) contract, pulling on actin (pink) and spectrin proteins (purple) connected to the cell membrane and helping to give the cells their distinct, indented shape (top). When the myosin fiber is experimentally manipulated so that it slackens or detaches from the cell-membrane proteins, red blood cells instead take on an oval shape (bottom). See full infographic: WEB | PDF
© kimberly battista

Healthy red blood cells are puffy with a dimpled middle. “It’s just a really cool shape,” says Velia Fowler, a cell biologist at The Scripps Research Institute in San Diego. For decades, researchers have been wondering what gives red blood cells their...

Back in the 1980s, when Fowler started working with red blood cells, it wasn’t clear whether they even contained myosin. She suspected they might, because the protein appeared to play a role in giving other cells their shapes. After painstaking experiments, Fowler finally showed that red blood cells do carry the protein, but exactly how it influenced erythrocytes’ shape remained a mystery. “We didn’t have the tools to do those experiments then,” she says. The myosin filaments in red blood cells are tiny, only around 200 to 450 nanometers long, making them extremely challenging to image. And the first inhibitor of myosin IIA—the specific protein found in red blood cells—wasn’t developed until the early 2000s, so scientists couldn’t see what happened when the protein wasn’t functioning in the cells.

In the new study, the team attached an immunofluorescent tag to myosin and a phalloidin tag to actin in human red blood cells and observed the cells with both superresolution and total internal reflection fluorescence microscopy. Filaments of myosin attach to filaments of actin and the scaffolding protein spectrin that lie just beneath and parallel to the cell membrane, the team found. When myosin and actin interact and myosin contracts, the cell membrane stiffens, giving the cell a dimple at its center. Inhibiting the motor activity of the protein causes the myosin filaments to expand so they no longer tug on spectrin and actin. That leads to less tension in the membrane and, ultimately, the disappearance of the dimple.

By expanding and contracting, the myosin filaments likely make it possible for red blood cells to shape-shift as they tumble in the bloodstream’s shear flow and squeeze through microvessels such as capillaries, then pop back into their dimpled form, Fowler says.

This discovery could also give clues to how myosin works in other types of cells, Vann Bennett, a biochemist at Duke University who was not involved in the new study, tells The Scientist. “Red blood cells are a true experiment of nature,” he says. “They’ve gotten rid of the cell nucleus, mitochondria, and all cytoskeletal proteins.” These simplified cells “have been a powerhouse for generating concepts about how [plasma] membranes are organized in other cell types,” Bennett explains. Understanding the importance of myosin’s contraction in shaping red blood cells, he says, may help in teasing out its functions in other cell types.

Another recent study supports myosin’s widespread importance in maintaining cell structure: the research showed the protein is critical for axons to grow and shape themselves, suggesting it could be involved in brain plasticity (Neuron, 97:P555–70.E6, 2018).