Of the two major neural highways that carry messages about movement down the spinal cord, one—the reticulospinal tract—is decidedly less fashionable, according to neuroscientist Stuart Baker of Newcastle University in the UK. In contrast to the corticospinal tract (CST), which evolved more recently and helps control complex, uniquely human movements such as playing the piano, the reticulospinal tract (RST) is associated with “boring” functions such as posture and walking, Baker says. But he suspects that the RST plays a bigger role in our movements than researchers currently appreciate.

To test for the RST’s possible contribution to strength training, Baker’s PhD student Isabel Glover, now a postdoc at University College London, taught two macaque monkeys to grasp and pull a handle attached to a pulley with their right paws. Feeding the monkeys fruit, nuts, or bits of chocolate as rewards for successful reps, she gradually increased the weight on the other end of the pulley. After a couple of months, the animals were able to pull their own body weight.

LIFT, AND LOWER: Over the course of two months, researchers trained macaque monkeys to lift more and more weight, until they were able to do the equivalent of a one-armed pull-up. When the researchers stimulated a bundle of nerves in the spinal cord known as the reticulospinal tract (RST), they saw increases in the resulting neuronal electrical signals in the monkeys’ arm muscles as training progressed, while they did not see the same consistent upward trend in the muscles’ responses to stimulation of the corticospinal tract (CST). The results suggest that RST connectivity may play a critical role in muscle strengthening. WEB | PDF
© Kelly Finan

Prior to the weight training, the researchers had implanted electrodes in the monkeys’ brain stems and arm muscles. This allowed the scientists to stimulate the CST or the RST and measure the electrical response in the muscles. Glover did this as the monkeys pulled an unweighted lever each morning before training began. Then she and Baker looked at how the neural connections changed over the course of the experiment.

They found a marked uptick in the muscles’ response to RST stimulation as weight training continued. By the end of training, responses had increased by about 50 percent. The team continued to track the strength of the neural connections for two weeks after training was complete and found that the increased connectivity persisted. The muscles’ responses to CST stimulation did not show the same steady increase during training, however, and in one monkey, CST connectivity appeared to decrease. After the training, the monkeys were killed, and looking inside their spinal cords, Baker and Glover found further evidence of the RST’s role in weight training: the connections on the trained (right) side were stronger than on the untrained (left) side, as evidenced by greater electrical responses of neurons in the spinal cord to stimulation of the brain stem. “It’s as if the volume was turned up on the trained side,” Baker says. There was no difference between the two sides for the CST.

“The most interesting [part] to me was the spinal cord result,” says Timothy Carroll, a neuroscientist at the University of Queensland in Australia who was not involved in the research. “It’s a level of analysis that just hasn’t been attempted for this type of exercise before.” He agrees with Baker that the RST is “underappreciated,” noting that “there is a really strong overemphasis on the cortex in controlling movement.” The new study, he adds, “is a nice example that there’s probably a lot going on in the brain stem and probably the spinal cord” during movement.

In the future, Baker is interested in understanding how increased connectivity of the RST relates to how the body heals after injury and how to help accelerate the process. For example, a study he published with colleagues earlier this year found that noninvasive brain stimulation could speed the recovery of hand function in stroke patients. “We’re very interested in using targeted stimulation of the RST to improve recovery after damage,” he says. 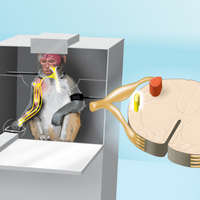 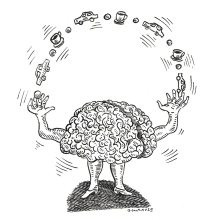