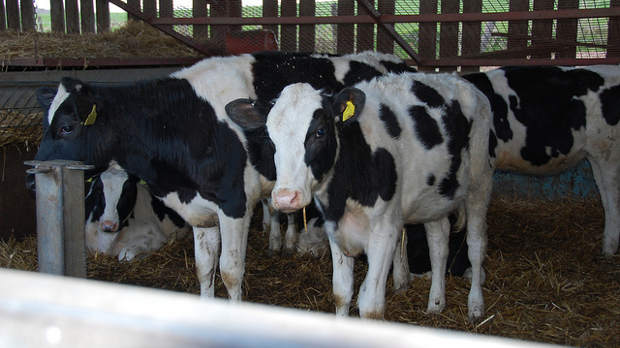 FLICKR, PAUL DUNLEAVYUsing transcription activator-like effector nucleases (TALENs), researchers at Recombinetics, a St. Paul, Minnesota–based biotech company that uses genetic technologies for agriculture and biomedicine, inserted an allele for the POLLED gene into the genome of bovine embryo fibroblasts. They then used somatic cell nuclear transfer to clone the genetically engineered cell lines and implanted the embryos into recipient mother cow. Five calves were born, two of which are still living; Spotigy and Buri are now 10 months old. None of the calves had evidence of horn buds, suggesting that the genetic manipulation had worked, according to a letter published last week (May 6) in Nature Biotechnology.

This feat of genetic engineering could avoid the need for dehorning of dairy cattle, an operation completed for the safety of the animals and their handlers. Hornlessness (known as “polled”) is a trait common in beef cattle, but rare...

The new calves represent a new way forward—using geneediting technologies like the TALENs used in this work or the ever-growing suite of CRISPR/Cas tools to breed hornless dairy cattle. Importantly, Fahrenkrug and his colleagues saw no off-target effects. “The same results can be accomplished by classical breeding, and with the same gene, but would take five to six generations of crossing and backcrossing and almost 20 years to accomplish,” Purdue University geneticist William Muir said in a statement sent to reporters.

“Although Spotigy and Buri could serve as founders for dissemination of polled genetics into the dairy industry, they also represent proof that introgression of [a POLLED allele] into elite animals could be used to eliminate the need for dehorning,” Fahrenkrug and his colleagues wrote in their letter. “This solution to the dehorning problem would be economically viable and could potentially improve the welfare of cattle in the United States.”

Of course, the applications of new gene editors extend beyond cattle, Muir noted. “Gene-editing technology also opens the field for other improvements in animal wellbeing, such as tail docking in pigs,” he said in the statement.