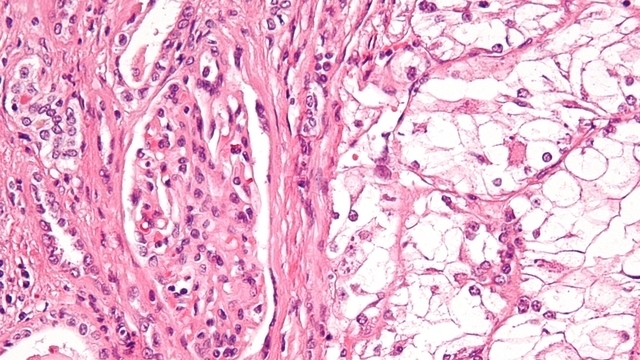 A type of kidney tumor can progress along one of three distinct evolutionary pathways, each with different clinical outcomes, according to research presented Sunday (April 15) at the American Association for Cancer Research (AACR) meeting in Chicago. The researchers also reported their findings last week (April 12) in Cell.

Charles Swanton, a cancer geneticist at the Francis Crick Institute in London, and colleagues analyzed 1,206 clear-cell renal cell carcinoma (ccRCC) tumor samples from 101 patients as part of the Tracking Cancer Evolution through therapy (TRACERx) program. The team found that ccRCC tumors fall into different evolutionary subtypes that are associated with distinct clinical phenotypes.

“In evolutionary biology, there’s been this conflict for quite some time between the punctuated evolutionists and the Darwinian evolutionists,” Swanton tells The Scientist. “I think what we’re...

The linear subtype is propelled by just two driver events: a genetic condition called von Hippel-Lindau syndrome, and loss of one copy of an allele in chromosome 3. Tumors in this subtype “are associated with relatively indolent disease, are cured by surgery, and almost never recur,” Swanton says.

The branched, Darwinian subtype—“if you like, the microevolutionary tumors,” says Swanton—acquire chromosomal complexity when they lose alleles in chromosomes 9 and 14 late in their evolution.  “For reasons we’re still trying to understand . . . we see single sites of metastatic disease develop over years or, in some cases, decades,” says Swanton. “The disease course may last 10 or 20 years.”

The third type, which undergo punctuated evolution, are the most aggressive. “These are the ‘hopeful monsters,’ as it were,” says Swanton. “These are the tumors that are highly chromosomally complex.” They lose alleles on chromosomes 9 and 14 early in their evolution and disseminate widely to multiple sites of disease shortly after surgery. Patients with this subtype often die quickly.

Swanton says he hopes the findings will eventually lead to the development of a “rule book” on ccRCC tumor evolution that will allow clinicians to quickly identify which subtype a patient has and then provide an accurate prognosis. Because their evolution is highly predictable, ccRCC tumors are particularly suited to this approach. A “rule book,” however, may be more difficult to write for other cancers, such as lung cancer, Swanton says, because they have more randomness associated with their evolution.