While most of the time eukaryotes get their mitochondrial genome from their female parent, the presence of paternal mitochondrial DNA has been occasionally reported, especially in hybrids. But leakage of this DNA during fertilization is often considered a failure of the mechanisms that normally ensure that solely the maternal mitochondrial genetic information gets transmitted to the offspring.

For example, in some species, mitochondria in sperm have a molecular tag that’s recognized by the fertilized egg, which then proceeds to degrade the unwanted genome. In hybrids, where the differences between the two mates are larger than those between a pair from the same species, research suggests that recognition process may not be as effective. This could increase the chances for the male’s mitochondrial DNA (mtDNA) to escape destruction and survive in the newborn.

However, recent theoretical and experimental studies suggest that this failure may not always be maladaptive. Hybrids, for instance, could benefit from having mitochondrial input from both distantly-related parents so that genes and proteins from this organelle can interact effectively with those from the nuclear genome. Some researchers hypothesize that paternal leakage of mitochondria could even be a rare yet necessary mistake in all eukaryotes, much like mutation.

Why we mainly inherit the mitochondrial genome matrilineally is not entirely understood. “We know very little about the evolution of mitochondrial DNA,” says Emmanuel Ladoukakis, an evolutionary biologist at the University of Crete in Greece. He adds that even for explaining such a fundamental question as why mitochondrial DNA is maternally transmitted, we mostly have hypotheses, but not “real strong data.”

Theoretical work and the limited empirical studies on the topic, though, suggest that uniparental inheritance of this organelle may facilitate the elimination of deleterious mutations in the mitochondria and minimize the spread of selfish mutations. That’s because, Ladoukakis explains, lineages with such mutations would disappear due to selection, but without infecting other lineages, given the uniparental transmission. “It is like a self-pruning tree,” he writes.

Uniparental inheritance may also ease the interactions between nuclear and mitochondrial genes in certain contexts. For instance, “having different variants [of mitochondrial genomes] within the same cytoplasm” can increase the stress response of cells, given that the nucleus receives two different signals, says University of Oxford biochemist and biotechnologist Ana Victoria Lechuga-Vieco. Having two types of mitochondrial genomes in an individual, known as heteroplasmy, is commonly associated with pathology in mammals—especially when it results from somatic mutations within an individual rather than biparental inheritance.

“When the nucleus cannot cope with so many different signals,” Lechuga-Vieco explains, the organism may face problems such as increased reactive oxygen species production. She speculates that uniparental inheritance may therefore facilitate the interaction between the set of genes in the mitochondria and that in the nucleus.

When in hybrids, do as the hybrids do

Despite the possible downsides of having various mitochondrial genomes within a cell, some scientists wonder whether having biparental inheritance of mitochondrial DNA could be helpful for individuals descended from distantly related populations. “The implicit assumption from the field is that because it is a flaw it should be maladaptive and selected against,” says Tom Allison, a computational biologist at Monash University in Australia. But given the limited number of studies addressing this assumption, he and his colleagues decided to explore, theoretically, whether getting some paternal mitochondrial DNA would be a hindrance or a help in the specific genetic context of hybrid individuals.

Among the biological challenges faced by hybrids is that their nuclear and mitochondrial genes may not interact properly. Nathan Rank, an evolutionary ecologist at Sonoma State University in California, explains that this interaction can occur in different ways; for instance, “nuclear proteins are involved in the replication of mitochondrial chromosomes”; also, proteins encoded by both genomes may interact with one another; and protein synthesis occurring inside the mitochondria “requires a combination of mitochondrial and nuclear gene products.” Mitonuclear mismatches between maternal mitochondrial genomes and nuclear genes inherited from the male parent have been reported both for engineered and natural hybrid populations.

See “The Two Genomes in Every Eukaryotic Cell”

For example, Rank has for decades studied the leaf beetle Chrysomela aeneicollis, which is found in western North America at different latitudes and elevations. Various subpopulations of the beetle have adapted to specific local environments. Within the different climate and altitude conditions present along the Sierra Nevada mountains in California, Rank and his colleagues have observed that subpopulations show variation in metabolic genes that might be related to adaptation to local temperatures and oxygen availability. 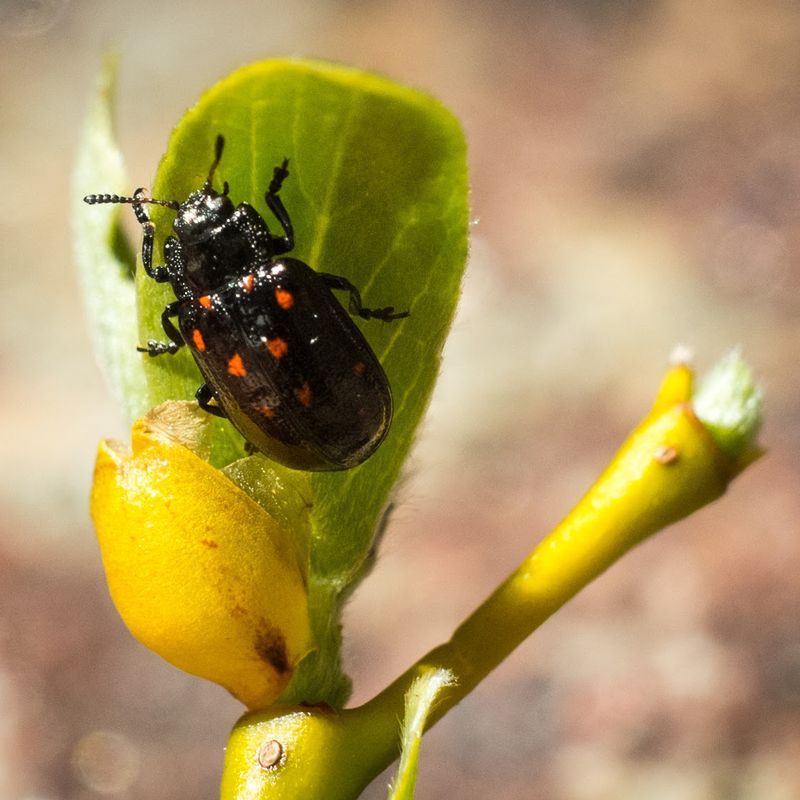 Recently, his team found two genes (one nuclear, one mitochondrial) that showed significantly greater variation along Sierra Nevada’s latitudinal thermal gradient compared to other genes. Moreover, their frequency variation appeared to be similar along the gradient, with different alleles associated with populations in the north and south, and more variation among individuals in overlapping areas where subpopulations often mix.

Rank and his colleagues then asked whether hybrids having a northern copy of one gene together with a southern copy of the other could be affected by this mismatch. They found that the mitonuclear incompatibility was associated with reduced running speed and lower reproductive success compared to hybrids with matched copies. This effect was more intense in environments where the metabolic demand was stronger, such as after heat treatment or at high elevation.

Allison and his colleagues focused particularly on testing whether getting some paternal mitochondrial DNA could reduce such mitonuclear incompatibilities in hybrid individuals. The team developed a computational model that simulated populations of individuals that belonged to either of two distinct lineages, each with its own nuclear and mitochondrial genomes. These individuals mated and migrated.

In this simulation, some females allowed only their own mtDNA to be passed down to their young, while others could have either two types of mitochondrial inheritance: uniparental if their mate was related, or biparental if the mate was from a different lineage. The team’s results predict that populations where biparental inheritance is enabled would have a fitness advantage, and thus be selected for, in scenarios where there is the most mixing between divergent populations, as having mitochondrial DNA from both parents may reduce the likelihood of mitonuclear mismatches in hybrids.

University of Zurich evolutionary ecologist Hanna Kokko, who was not involved in this study but has previously collaborated with one of its coauthors, says these conclusions made her think of the phrase “when in Rome, do as the Romans do.” “In an environment where a lot of the genes come from another individual,” she says, it might be good to “also get the mitochondria from that other individual.”

Rank, who also was not involved in the study, says that the paper is inspiring. He explains that he recently performed some preliminary analyses on mitochondrial genomic variation among C. aeneicollis populations and found some evidence for heteroplasmy. If heteroplasmy is potentially beneficial in hybrid populations, as the theoretical paper predicts, it might explain this observation, he says.

Ladoukakis, who has widely studied heteroplasmy, says that researchers already have the tools to test the ideas proposed by Allison and colleagues’ theoretical paper. In a follow-up email, he adds that “it gives a potential functional and adaptive role to heteroplasmy,” which is exciting, given that for many years, this phenomenon “was thought to be a random mistake of the . . . mechanisms that guard uniparental mtDNA transmission.”

Allison says he can imagine scenarios apart from hybridization where paternal leakage could be potentially beneficial. As Rank’s study on leaf beetles suggests, he notes, the environment plays a role in interactions between the nuclear and the mitochondrial genomes. So it might be that in rapidly changing environments, it could “pay to inherit mitochondria from both parents, just because you’ve always got a reserve of the haplotype that will be most beneficial when the environment switches the next time.”

Even if getting all of one’s mitochondrial genome from one parent has clear benefits, there could be drawbacks too. For instance, having strict uniparental inheritance would create lineages vulnerable to mutation accumulation. “If you have a nonrecombining genome, then this genome accumulates mutations faster than the recombining genomes,” says Ladoukakis. But in some cases, paternal leakage can occur at very low levels, he adds, and this “can lead to [a little] recombination”—possibly “enough for the mitochondrial DNA to escape the accumulation of deleterious mutations.”

This is why Ladoukakis and his team are interested in asking whether heteroplasmy could be controlled by selection. Their first step is to ask whether it is indeed a random process, as the prevailing view suggests. Together with his colleagues, the team recently tested this question in two consecutive generations of Drosophila hybrids made by crossing D. simulans and D. mauritiana. Ladoukakis often use hybrids to study heteroplasmy as a general phenomenon, given the high rates of biparental leakage they have.

It wasn’t. Some fly families had a significantly higher number of heteroplasmic offspring across both generations than did others. “This doesn’t mean that [heteroplasmy] is controlled totally by genetics, but it says it has a genetic component,” says Ladoukakis. The main finding of his paper, he adds, is that “paternal leakage does not follow a random pattern.” While “this does not prove necessarily that it is governed by selection,” he clarifies, it offers the chance that it is.

Lechuga-Vieco sees a link between these findings, which she was not involved with, and some earlier results she and her colleagues reported in mice, where mitochondrial DNA heteroplasmy in homozygote nuclear genetic backgrounds was also shown to be a nonrandom process that was dependent on mitonuclear interactions and metabolic factors. Her team did not look at paternal leakage, but rather at the segregation of haplotypes from an already heteroplasmic female they artificially generated.

Results like Ladoukakis’s and her own suggest that heteroplasmy does not occur strictly by “random drift,” she says; rather, there are mechanisms “that modulate this segregation.”

In his email, Ladoukakis writes that if selection is at work, it “can act positively, if heteroplasmy is adaptive,” as his work and Allison’s model suggests, “or negatively, if, for example, strict maternal transmission need[s] to be actively protected, or if mutated, deleterious mtDNA haplotypes have to be removed,” as seems to occur in Lechuga-Vieco’s study. “All these papers suggest that selection might act upon heteroplasmy, but they are suggesting different potential [non-mutually exclusive] roles of heteroplasmy.”

Ladoukakis says he finds parallelism between paternal leakage and mutation. Survival of an organism and species relies on the accurate replication of DNA, but for evolution to take place “you [need] to have variation; you need mutation,” even if it occurs at very low rates. Yet, “we still talk about mutations as mistakes during the replication.”

Paternal leakage can be analogous to this, Ladoukakis notes. “It is a mistake of the mechanism, but it [might] be a very important mistake.”