ABOVE: A representative litter of pups. A white coat indicates that a certain gene had been disrupted by CRISPR-Cas9.
ADAPTED FROM GRUNWALD ET AL., NATURE, 2019.

Gene drive, a genetic engineering technology that pushes offspring to inherit a particular allele from one parent more frequently than normal, has already worked in insects. Now, researchers show it can succeed in vertebrates too. In a study published today (January 23) in Nature, the authors describe an approach that uses CRISPR-Cas9 to alter the female mouse germline and drive the expression of white fur and a red fluorescent protein.

“It’s the first paper robustly describing gene drive work in mammals,” says Bruce Whitelaw, a researcher at the University of Edinburgh who was not involved in the study.

According to coauthor Kimberly Cooper, an evolutionary developmental biologist at the University of California, San Diego (UCSD), the project got started because...

Cooper and her group turned to two UCSD colleagues, Ethan Bier and Valentino Gantz, who had described a gene drive in Drosophila in 2015. They specifically highlighted the ability of the technology to quickly convert heterozygous mutations to homozygous ones in the population. The goal is to make a cut in DNA with Cas9 in a particular chromosomal location. That break is then corrected by a process known as homology directed repair in which the complementary locus on the homologous chromosome serves as a template. In the case of the 2015 insect gene drive, the template carried a guide RNA to target a wildtype gene for editing and the cas9 gene. In such a way, the engineered gene that is present on one chromosome ends up duplicated on the other chromosome, increasing the likelihood that it will be inherited in the next generation. 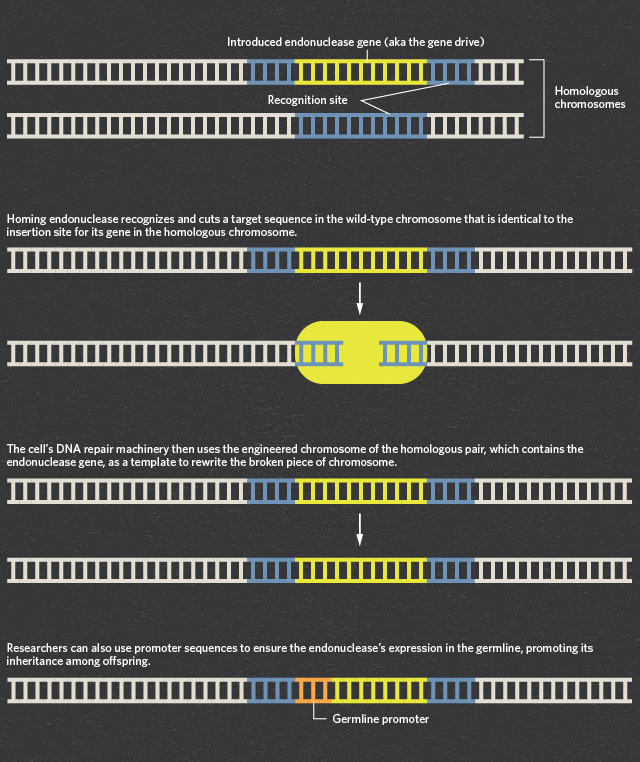 While it was promising that gene drive had been successful in flies, “it wasn’t obvious that it would work in a mouse because insects and mice separated from a common ancestor more than seven hundred and fifty million years ago,” Cooper says, and over that much time, “a lot can change that’s really relevant for this kind of mechanism to work in an animal.”

In the current study, the team focused on the gene Tyrosinase, which determines coat color and would give the researchers an easy-to-visualize readout of whether their engineered gene had been copied. They inserted the gene drive containing a guide RNA to lead Cas9 to Tyrosinase and a gene for a red fluorescent protein into Tyrosinase’s fourth exon.

After also introducing a transgene into the population that would activate cas9 at different times and in different places during sperm, egg, and embryo development, the team bred animals to see if they could produce white animals, indicating that Cas9 had cut the Tyrosinase gene, and that would also glow red, meaning the cut Tyrosinase had been repaired with a copy of their engineered gene.

The only scenario in which the engineered gene was copied at a greater frequency than 50 percent—at best about 72 percent—was when Cas9 was activated during egg development in female mice. Activating Cas9 during early embryogenesis or during sperm development in males did not lead to homology directed repair, instead largely resulting in insertions or deletions at the Cas9 target sites.

The authors, who published their work as a preprint in 2018, present the strategy as a tool that would—by following the gene drive steps multiple times—allow scientists to more efficiently generate animals carrying multiple transgenes. “They’re absolutely correct in their prediction that this would be a significant improvement in that far fewer animals would be required” compared to existing genetic techniques, Whitelaw explains. It also lays the groundwork for developing gene drives in mammals in the wild that are pests, he adds. “It is an important paper.”

Scientists have proposed gene drives for pest control because it would allow for the rapid spread of deleterious or lethal genes in a population. “The tragedy is this doesn’t work in males,” in contrast to what’s been previously modeled and observed in insects, says Michael Wade, a biologist at Indiana University Bloomington who did not participate in the study. “Most of the time when people talk about [gene drives] in the insect world as a mechanism of population transformation or as a mechanism of population suppression, they’re talking about releasing huge numbers of males . . . and their offspring all drop dead because they’re converting a normal gene to a homozygous lethal. You can’t do a male release if in the progeny of the males you don’t see the consequences,” he says. Therefore, “most of the use of this type of machinery is going to be taking apart development and studying rare diseases that are caused by a constellation of unusual homozygous mutants,” Wade says.

Cooper and her team are already applying the technology to questions of limb development and evolution in the three-toed jerboa, a mouse relative that hops on two giant back legs, rather than walking around on all fours, by generating transgenic mice that express jerboa genes. But “this approach that would allow you to combine multiple [genetic] changes together would be really useful . . . to make mice for biomedical research and for drug design,” as well as to answer other questions about evolution, she says.

To this end, they are refining the timing of Cas9 production in female mice and investigating whether greater efficiency might solve the problem of the lack of homology directed repair in males. “This is the first proof that this is possible, but it wasn’t perfect, so we want to make it better,” Cooper says.