The functionality of genetic regulatory elements known as enhancers is widely conserved among species of animals spread across the evolutionary tree. When researchers inserted an enhancer sequence from a sponge into zebrafish and mice, both vertebrates were able to interpret the genetic information and drive cell-specific expression of a developmental gene, even within cell types that a sponge doesn’t have.

The results of the new study, published November 5 in Science, show that, at least in some cases, enhancer function persists across species that last shared a common ancestor as far back as 700 million years ago.

Once bound by proteins, enhancers control where, when, and how genes are regulated, and are largely responsible for cell differentiation during development. “The reason why a muscle cell is different from a skin cell is all due to how genes are regulated. That’s why it’s really important to understand these regions,” Emily Wong, a computational genomics researcher at the Victor Chang Cardiac Research Institute in Australia and the lead author of the new study, tells The Scientist. “Our discovery is exciting because we know that these regions evolve really rapidly, making them more difficult to find.” 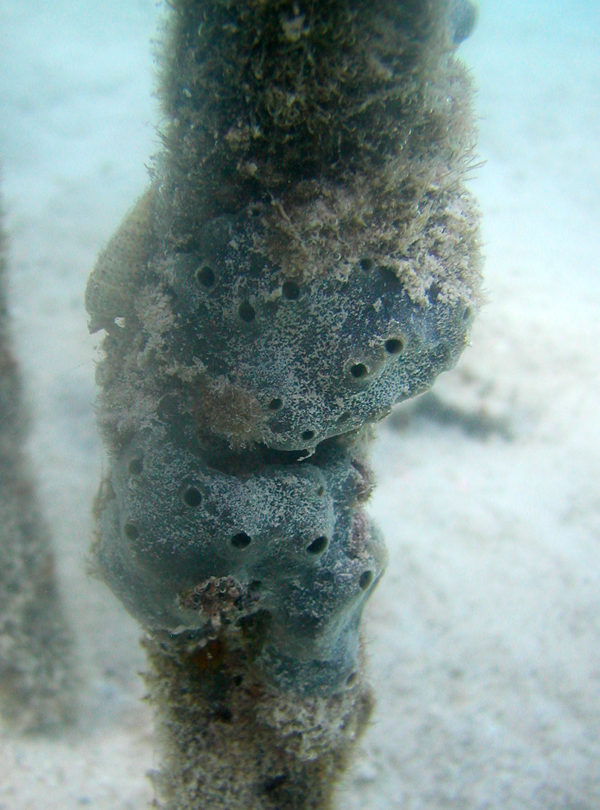 Amphimedon queenslandica was the first sponge to have its genome sequenced, and has since been used to study development and the evolution of complexity in metazoans.
University of queensland

Many enhancers lie in noncoding regions of the genome, portions Wong refers to as “dark matter” because most genomic research focuses on exons, which code for proteins. But growing evidence suggests the human genome may have hundreds of thousands of enhancers, far outpacing our roughly 20,000 protein coding genes. Enhancers also evolve rapidly compared to the transcription factors they interact with and the genes they regulate, meaning that enhancers may not retain their sequence fidelity over time.

The conventional method of comparing genomes by aligning them and looking for similar sequences is therefore ineffective for enhancers, whose motifs of short DNA repeats can change so much that they are no longer recognizable. Indeed, not a single enhancer has been shown to be conserved across the entire animal kingdom.

Wong and her colleagues suspected, though, that enhancers may be flexible in their “regulatory grammar,” meaning they can retain their function even when the number, arrangement, or type of motifs that make up the enhancer are shuffled. If this were true, enhancers could, in theory, maintain their function across different species.

To test this hypothesis, the team went looking for putative enhancers in the sponge Amphimedon queenslandica, an Australian species frequently used to study the evolution of metazoans. They targeted microsyntenic gene pairs, in which one gene (the target) is regulated by an enhancer within another gene (the bystander). Because the target gene is often critical to proper development, the researchers reasoned that selection would keep the genes more stable over time.

Although they identified 60 such gene pairs, the researchers focused most heavily on a single pair with a known regulatory role, Islet-Scaper, in which the Islet gene is the target and the Scaper gene is the bystander. The enhancer, called eISL, is located on the intron of Scaper. In vertebrates, Islet is involved in nervous system and heart development, among other functions.

The team first inserted the entire Islet-Scaper pair into a transgenic zebrafish embryo that still contained its own Islet genes (zebrafish have three paralogues) and enhancers. If the fish’s regulatory machinery had lost the ability to recognize binding sites on the sponge enhancer, researchers would not have seen any expression of the sponge Islet gene. However, Wong and her colleagues detected transcripts of sponge Islet in addition to the fish’s own versions, meaning that the zebrafish’s transcription factors were still able to read the sponge’s binding sites even after hundreds of millions of years of evolution.

Next, they inserted the sponge enhancer upstream of a green fluorescent protein that caused the fish to glow in specific cell types where the enhancer was active. Even though sponges lack brains, eyes, and hearts, the fish showed cell-specific expression patterns consistent with a wildtype zebrafish, findings that were supported by a subsequent experiment using mice. Sponge-derived enhancer activity caused the fish to glow most brightly in their nervous systems, ears, and skin, while the mice also showed expression in their eyes.there is a functional conservation even though the sequence itself . . . is not recognized."

“When we put these sequences into completely different animals that are very divergent, we see that it’s able to drive cell-type specific expression,” Wong says, findings which suggest that “there is a functional conservation even though the sequence itself . . . is not recognized.”

While the team is not the first to confirm that sequences need not look alike to translate between animals, Flávio S. J. de Souza, a developmental biologist at the University of Buenos Aires who has worked with enhancers and Islet and was not involved in the current research, was surprised at just how deep this conservation ran. “We are dealing with a sponge, the most extreme phylogenetic distance that you can get in the animal kingdom,” de Souza tells The Scientist. “I think this is pointing to a more general phenomenon.”

There is a functional conservation even though the sequence itself . . . is not recognized.

Having shown that eISL is functionally conserved, Wong next developed a computational tool to scan microsyntenic regions of genomes from various databases based on characteristics of the enhancers’ binding motifs—their number, location, and sequence type, rather than the entire sequences themselves—to find enhancer orthologs in sponges, zebrafish, mice, and humans. When they created transgenic fish with their suspected eISL human and mouse enhancer candidates, they found similar cell-specific Islet expression patterns to what they had seen in their earlier experiments using the sponge version.

“It is clear, and this study reinforces it, that it does not require that you keep the binding sites in the same place, in the same number, in the same orientation,” Michael Eisen, a molecular biologist at the University of California, Berkeley, who was not part of the current study, tells The Scientist. “You can accomplish the same input-output pattern in different ways."

De Souza says he would like to know more about what the Islet enhancer is doing in the sponge itself. While the paper has proven that the section of DNA can function as an enhancer, performing these transgenic experiments “takes it outside of its native genomic context,” de Souza says. A better understanding of its role in A. queenslandica would require genomic manipulations such as gene knockout experiments that are common in model organisms, but may be difficult in more exotic species.

Eisen says he wants to see the same rigor the team brought to the Islet-Scaper pair applied to hundreds, if not thousands, of additional putative enhancers across species. With so little known about enhancers more generally, it’s hard to say whether the team’s findings touch on an outlier in how these regulatory elements remain conserved over time.

“I still think people don’t have an appreciation for just how weird the evolution of enhancers is,” Eisen says. “It’s good for people to be reminded with new examples periodically, because I think that the phenomenon that this paper describes is still not widely appreciated, even by people in the transcription field.”