Calls to include a new breast cancer subtype in future clinical trials reveal fundamental disagreements about HER2’s role in the disease.

HER2-positive breast cancer may be a misnomer, according to a growing body of evidence that one of the most widely recognized oncogenes, HER2, may not be the primary driver of the disease. The research, which comes from several groups including Genentech, makers of the prevailing anti-HER2 treatment, has researchers questioning whether current clinical guidelines for classifying and treating breast cancer may be off the mark. New classification schemes may better identify those patients more likely to benefit from anti-HER2 treatment, or point to therapies that might be more effective.

HER2 is short for human epidermal growth factor receptor 2. Researchers discovered HER2 breast cancer in the 1980s. Too many copies of the HER2 gene or its overexpression appeared to cause an especially aggressive form of the disease. By the late ’90s, a drug called Herceptin that targeted the HER2 receptor, sped into the clinic on the US Food and Drug Administration’s new fast-track status. As Dana-Farber Cancer Institute oncologist Harold Burstein put it a couple of years ago, HER2 breast cancer, once the most feared type of the disease, had gone from “worst to first,” largely because of Herceptin.

After analyzing multiple, published genomic data sets, researchers at Genentech, which makes Herceptin, reported in 2018 that there was “no evidence” that HER2 amplification represents a breast cancer subtype.

About 14 percent of breast cancers are HER2-positive, a diagnosis largely based on immunohistochemical staining to reveal an overabundance of HER2 receptors spanning the cancer cells’ membranes, with ambiguous cases decided by testing for an abnormally high HER2 gene copy number. The American Society of Clinical Oncology recommends Herceptin as the first-line treatment for HER2-positive breast cancer. In the US, tens of thousands of patients receive Herceptin each year. Recently, however, researchers—including those from Herceptin maker Genentech—have begun to reconsider the HER2-positive subtype.

In the HER2-centric model of breast cancer, highly dysregulated HER2 signaling drives uncontrolled cell growth. HER2-positive breast cancers carry as many as 50 copies of the HER2 gene, compared with just two in noncancerous cells, and the gene can be highly expressed, leading to HER2 protein levels as much as 40- to 100-fold higher than normal.

Other researchers have similarly reevaluated breast cancers using transcriptional profiles that look at gene expression across the genome, rather than focusing on individual genes thought to have large effect. The resulting subtypes require a more nuanced view of HER2 or don’t include HER2 at all.

“[T]he whole state of subdividing and classifying breast cancers is in a state of flux,” says Larry Norton, a medical oncologist at Memorial Sloan Kettering Cancer Center who played a key role in the clinical trials establishing HER2-positive breast cancer as a subtype and Herceptin as the first drug for treating it. “We’re in a molecular era now, so we think we know more.”

Rethinking the HER2 breast cancer subtype

The conventional view of HER2 breast cancer that guides current clinical practice has been under pressure for some time. While most researchers remain convinced that HER2 is a clear driver of some breast cancers, Herceptin by itself struggled to knock down HER2-positive tumors in early clinical trials. “It was the synergy with [the chemotherapy drug] paclitaxel that really put the drug on the map,” says Norton, who was involved in the early trials of the combination therapy. “Had we focused in on trastuzumab [Herceptin] as a single agent . . . the drug would have been abandoned.”

Norton was the senior author of the published trial that led to FDA approval of Herceptin for advanced breast cancer in 1998. However, that trial did not actually demonstrate that the combination of Herceptin and paclitaxel, a type of chemotherapy drug known as a taxane, was superior to paclitaxel alone in increasing survival. Only when the data were combined with separate trial arms testing non-taxane chemotherapy with and without Herceptin did the researchers see a statistically significant difference in survival.

In addition, the two trials that led to Herceptin’s 2006 approval for early breast cancer later cast doubt on HER2 as a biomarker for response to the drug. A 2007 reanalysis of one of the trials found “no statistical interaction” between patients’ HER2 status and whether they benefitted from Herceptin. A similar reanalysis of the second trial corroborated this result: “[Herceptin] benefit seemed independent” of HER2 amplification, the researchers wrote in their report.

In 2000, a group at the Stanford University School of Medicine used state-of-the-art microarray technology to propose molecular subtypes of breast cancer based on the expression of more than 8,000 genes in biopsies from 42 patients. While the researchers identified a molecular signature for a HER2-based subtype, it wasn’t strictly based on overabundance of the HER2 receptor or high HER2 copy numbers in the genome. Rather, they used the expression patterns from nearly 500 genes as indicators of the activation of the HER2 signaling pathway. 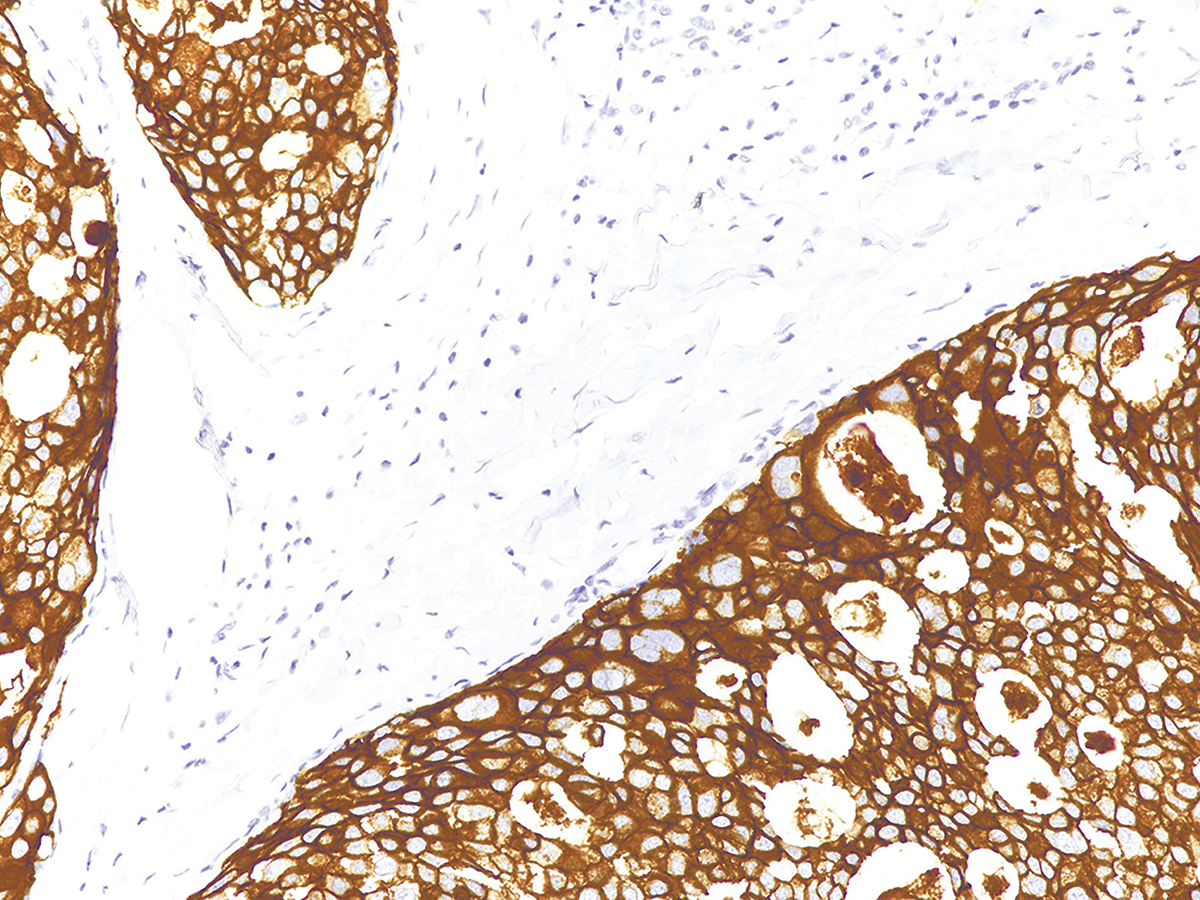 The new subtype, which the team later dubbed HER2-enriched (HER2E), fractured the HER2 classification: a tumor might be HER2-positive based on the classical methods but not show evidence of HER2-mediated signaling activity at the transcriptional level. Only 47 percent of HER2-amplified tumors are HER2E, a concordance the 2018 paper from Genentech calls “remarkably weak.” Margaret Gatti-Mays of the National Cancer Institute estimates that 30 percent to 40 percent of tumors classified as HER2E tumors are not clinically HER2-positive.

A number of research groups have found no HER2-based subtype at all. In a 2005 paper, Richard Iggo, then at the Swiss Institute for Experimental Cancer Research, and colleagues performed experiments similar to those that had identified the molecular subtypes put forward by the Stanford researchers in 2000. Iggo’s team found that the previously discovered HER2 group did not appear to be defined by HER2, but by “genes that looked like they might be related to androgen signaling,” says Iggo, now at INSERM and the University of Bordeaux in France.

Similarly, in their 2018 study from Genentech, Anneleen Daemen and Gerard Manning found that AR activity is a key part of the HER2E subtype. “HER2-enriched is not HER2-driven, per se. It’s rather the androgen signaling,” says Daemen, now head of translational medicine at ORIC Pharmaceuticals. “You have androgen signaling that is massively on . . . and that is regardless of whether the HER2-enriched tumor is also HER2-positive or not.”

Iggo and his colleagues called for the HER2E subtype to be renamed “molecular apocrine” to reflect a pathology very different from a HER2-centric model of disease, one that appears to involve signaling by AR and perhaps other pathways as well. “The thing that’s slightly disappointing for me,” says Iggo, “[is that] rather than changing the name . . . [the Stanford team] just said ‘HER2-enriched,’ which perpetuates the idea that [HER2 amplification] defines a biological subtype.”

Daemen agrees. “When they originally defined these subtypes, they should not have used the word ‘HER2-enriched’ because that’s misleading,” she says. “[The nomenclature is] so ingrained in the research that’s happening for breast cancer that people really hold on to it. . . .  The field at large has not questioned those subtypes or deviated from them as much as is happening in other fields or other cancer types.” The Stanford team did not respond to The Scientist’s request for comment.

Which subtypes are real is “a very difficult question,” says Tarulli. One recently published breast cancer scheme includes seven types, three of which could be considered subsets of the traditional HER2-positive categorization, while yet another research group has proposed 10 molecular subtypes, including one that pertains to HER2-type disease.

According to Daemen, her work “was closely followed by the clinicians and the biomarker scientists who were running trials” in breast and gastric cancers. “I worked closely with the clinical teams at Genentech at that time to see if we could explain why some patients in our trials were not responding as well to anti-HER2 agents because of AR expression, for example.” However, Daemen left Genentech last fall and says, “to my knowledge, there is no additional research that is being undertaken [at the company] as a result of this.” Genentech spokesperson Kayla Bruneau says that the company did “not have any researchers available to discuss the [Daemen and Manning] paper at this time.”

The clinical path ahead

For now, clinical practice continues in strict adherence to the HER2-positive subtype as classically defined. HER2 receptor overabundance or HER2 amplification has been validated “as a biomarker of clinical effect for HER2-targeting therapies,” Gatti-Mays says in a statement emailed to The Scientist. But the diversity of subtypes churned out by recent molecular analyses has thrown the field for a loop.

“We thought that there should be some underlying molecular characteristic that is shared by all the HER2-positive breast tumors, and that turned out not to be the case,” says Daemen. This absence of HER2-related biology in HER2-positive tumors seems to clash with how targeted therapies, including anti-HER2 treatments, are thought to work, namely, by interrupting a well-understood, cancer-driving pathway.

If you can demonstrate that adding a HER2 enrichment analysis in terms of clinical decision-making improves patient outcomes, then that classification needs to go in.

HER2E in particular is gaining traction as a possible subtype to consider for eventual clinical use. According to a meta-analysis published earlier this year, HER2E patients show a stronger clinical benefit from anti-HER2 therapies than other molecular subtypes. Tarulli says the inclusion of HER2E in future clinical trials of anti-HER2 therapies “makes a lot of sense, because now we’re understanding more about the mechanisms behind what [HER2] is doing.”

Once clinical trial data start rolling in, researchers can make a more informed decision, he says. “If you can demonstrate that adding a HER2 enrichment analysis in terms of clinical decision-making improves patient outcomes, then that classification needs to go in.” Tarulli also says that for HER2E patients, “inhibiting both the androgen receptor and HER2 makes a lot of sense and will probably increase the effect of both.” The authors of the meta-analysis did not respond to a request for comment.

Daemen disagrees with using HER2E to decide who gets anti-HER2 therapy, which can have heart-related side effects, in a clinical trial. “If you were to base treatment decisions on the HER2-enriched label of a tumor, you would do harm, rather, in patients that lack HER2 amplification.”

HER2E is “an interesting subgroup,” agrees Gatti-Mays, but “[m]ore information is needed about the long-term clinical outcomes of these HER2E patients.”

Still, earlier conceptions might be falling away, Norton says. “The simplistic notion—HER2 is a signaling molecule, you blockade, stop the signaling, so you get apoptosis rather than going into cell division—[that] all makes sense, but it could be wrong.”

Robert Fortner is a freelance journalist based in Portland, Oregon. Email him at robertwfortner@gmail.com or follow him on Twitter @robertfortner1.