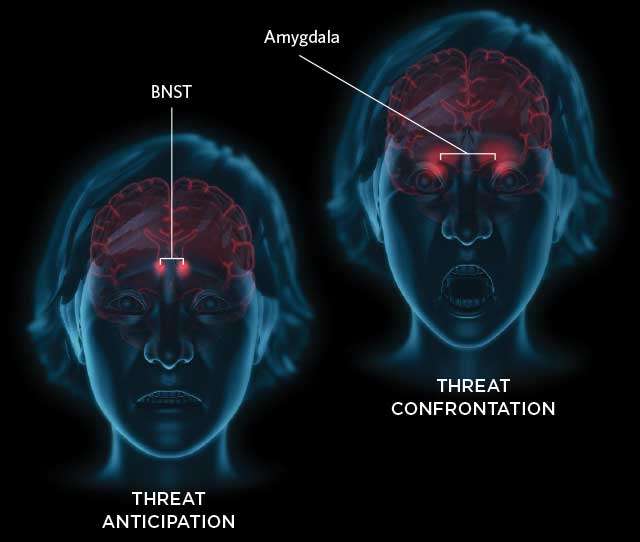 ON EDGE: Researchers trained participants in two studies to associate visual cues with a mild electric shock to the finger. Following a visual cue suggesting a shock might be imminent—i.e., during threat anticipation—the volunteers’ brains showed higher activity in the bed nucleus of the stria terminalis (BNST), a region of the brain associated with defensive responses in uncertain situations. When participants were shocked—i.e., during threat confrontation—they showed higher activity in their amygdalae, two almond-shaped clusters of nuclei associated with fear and emotional stimulation.© EVAN OTO/SCIENCE SOURCE

When Floris Klumpers zapped people with electricity while working toward his PhD in the late 2000s, he expected his volunteers’ amygdalae—key emotion centers in the brain—to light up in anticipation of a shock....

Klumpers assumed he’d made a mistake, but after replicating the finding in further experimental work, he began thinking about the different stages of animals’ fear responses. First, there’s anticipation, during which an individual becomes alert and plans reactions to possible danger. Then there’s confrontation, when it has to act to avoid imminent danger. Perhaps, Klumpers reasoned, the brain’s fear-processing regions treat these two phases differently.

To investigate, Klumpers, now a neuroscientist at Radboud University Medical Center, and colleagues recently collected data from more than 150 volunteers, who received mild electrical shocks to their fingers as they viewed a computer. “We have a simple cue on the screen that can predict the occurrence of an electrical stimulation,” Klumpers says. In one set of experiments, for example, a yellow square meant a shock was likely, while a blue square signaled no shock for the time being. Meanwhile, the researchers monitored participants’ heart rates and imaged their brains using fMRI.

Most people’s heart rates dropped on seeing the shock-predicting cue—a response “linked in previous studies to an enhanced state of alertness” and reaction planning, says Klumpers. Plus, neural activity increased in the bed nucleus of the stria terminalis, a tiny brain region associated with anxiety in rodents. Upon being shocked, though, heart rate accelerated—a response that “helps you mobilize resources” to react, Klumpers says—and neural activity shifted to regions associated with fear, including the amygdala.

The results indicate that threat anticipation and confrontation phases are separated in the brain, Klumpers notes, adding there’s substantial individual variation. For example, in people who reported childhood maltreatment on a questionnaire administered after the study, “we found that the amygdala was more active during threat anticipation,” he says. “The alarm system goes off a little bit earlier.

Caltech neuroscientist Dean Mobbs says that while the group’s main findings are plausible, he suspects a higher-resolution study would reveal finer-grained variation in activity within the regions studied. “I think it’s correct, but I don’t think it’s the full picture,” he says. He’d also prefer a more ecologically relevant stimulus than electricity, he adds; his group monitors people’s responses to a live tarantula.

Klumpers says he now wants to study people’s brains when they are planning how to avoid a threat. “In the real world, when we’re anticipating something we still have a window of opportunity to deal with it.”