Much of a filamentous fungus’s life involves infiltrating organic tissue: weaving its hyphae between cells in decaying animals, for example, or, in the case of some pathogenic species, invading plants through tiny pores in their leaves. The tips of these fungi grow by synthesizing new cell wall on the extending side, but scientists have puzzled over how they control growth through such tight spaces.

Norio Takeshita of the University of Tsukuba in Japan approached the question by growing seven species of fungi in a microfluidic device with tiny channels, the narrowest just 1 micrometer across—smaller than the diameter of typical hyphae. His team used live imaging techniques, some involving labeling intracellular components with green fluorescent protein, to see how each species handled the challenge. The species turned out to respond in one of two ways: one group of fungi grew through the channels just fine, Takeshita notes in an email to The Scientist. “Surprisingly, however, the other group . . . stopped growing in the channels, or stopped after the channels.” 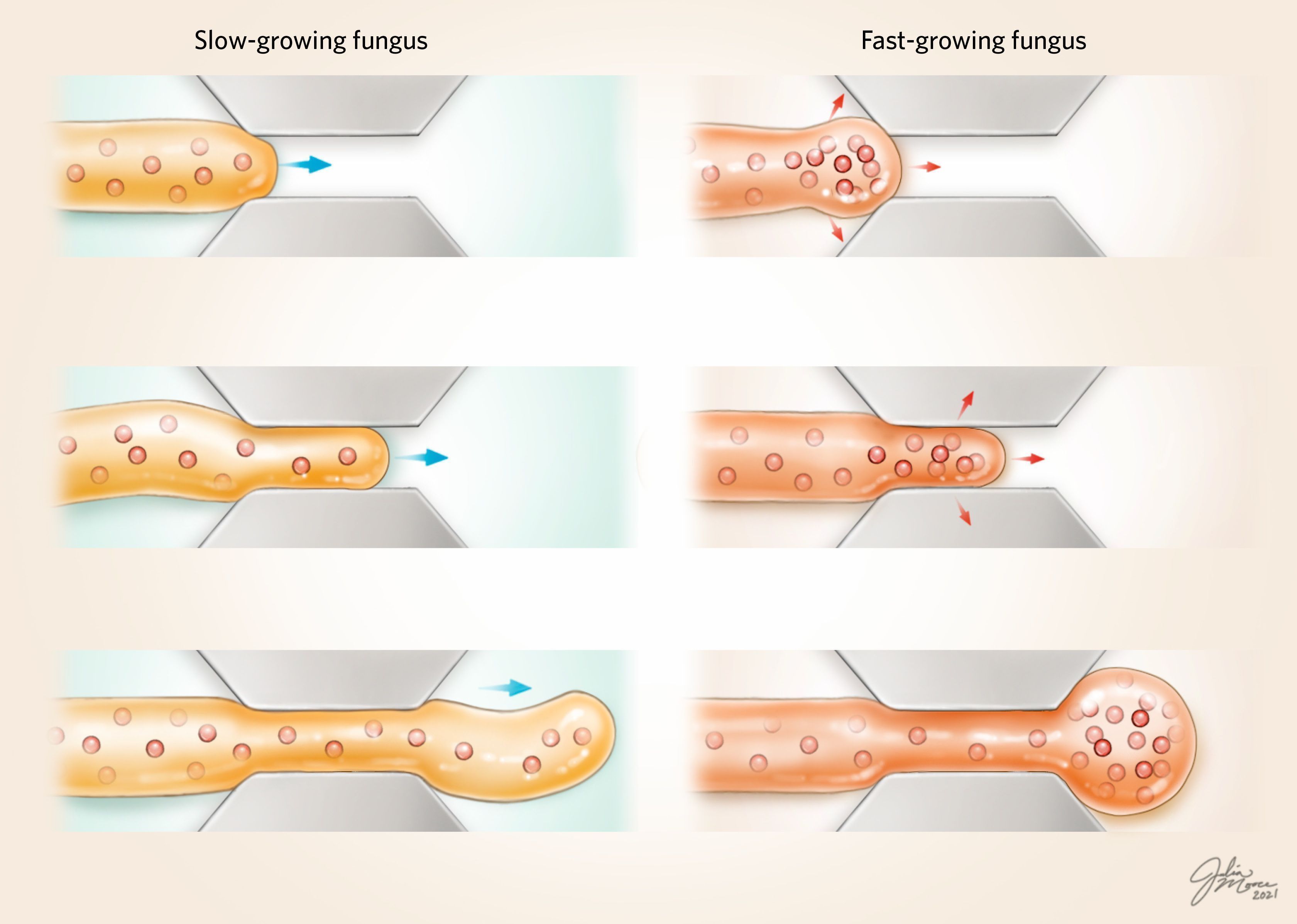 SLOW AND STEADY: When slow-growing fungi arrive at a gap smaller than the width of their hyphae, they can squeeze through and keep growing once they reach the other side. Fast-growing fungi tend to stall, either before their hyphae make it through the gap (top right), or because the hypha becomes depolarized—that is, it loses its internal organization—by the time it emerges from the channel (bottom right). Researchers used live-cell imaging to help explain the difference: faster growers have more vesicles carrying material needed for hyphal elongation and a bigger buildup of pressure at the tip, causing swelling that disrupts normal growth. WEB | PDF
© JULIA MOORE, WWW.MOOREILLUSTRATIONS.COM

Fungi in that second group had much faster hyphal elongation rates than those in the first did. Scouring the images for explanations, Takeshita and colleagues discovered a link between growing speed and the movement of intracellular vesicles, which shuttle proteins and other molecules within cells. “To elongate the membranes and cell walls quickly, a large number of vesicles containing [the necessary] material are supplied to the mycelial tip,” Takeshita says. This was fast-growing fungi’s downfall: the rush of vesicles and pressure buildup at the tip blocked growth through the channel or disrupted the hypha’s internal organization by the time it reached the other side. Slower-growing species had time for internal rearrangement without such a buildup.

The results indicate a tradeoff between speed and plasticity, Takeshita writes. “Fast-growing fungi possess the advantage of covering quickly new nutrient-rich substrates or free open spaces. . . . On the other hand, the slow growth of fungi may help them to adapt better to different niches or to grow on more complex substrates.”

Slow-growing Aspergillus nidulans passed through the 1-micrometer-wide channels, while fast-growing Neurospora crassa stopped after the channels. The nuclei were tagged with GFP.
COURTESY OF NORIO TAKESHITA

Roger Lew, a biophysicist at York University in Toronto who was not involved in the work, says the team’s findings will advance the study of cell growth more generally. “We’re looking at something that’s relevant to a whole range of different kinds of developmental patterns in different kingdoms,” he says. Pollen tubes in plants grow in a similar way to hyphae, he notes, and both are of interest in biotechnology, with applications to crop breeding and disease management, respectively.

Further work could incorporate sensors to measure the pressure experienced by fungi growing in channels and provide more information about how the organisms make growth decisions, Lew says. Setups such as the one used in the study allow researchers to do “a lot of imaginative stuff. . . . There are possibilities out there, for sure.”