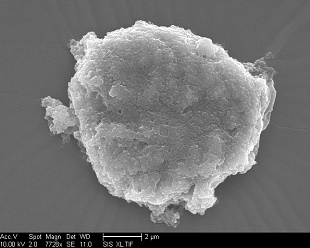 A neuronal nucleus isolated from its cellUCSD, ZHANG LAB

Neurons within a single brain can differ from one another in genomic content—a phenomenon known as mosaicism. But the extent to which those differences are reflected in gene expression has remained uncertain, in large part because of the difficulty associated with analyzing transcription in individual cells. Now, a team led by researchers at the Scripps Research Institute in La Jolla, California, and the University of California, San Diego (UCSD), has developed a high-throughput pipeline to analyze the transcriptomes of thousands of single neuronal nuclei, revealing considerable variation in gene expression across the human cerebral cortex. The findings were published today (June 23) in Science.

“There’s any number of studies currently in the literature that have, say, identified genes expressed ‘in the brain,’” said study coauthor Jerold Chun of Scripps. “But in fact, it appears that there is a lot...

“This is a fantastic, tour de force sort of experiment, involving tons of single cells,” said Mike McConnell, a neurobiologist at the University of Virginia School of Medicine who was not involved in the work. “It really sets the stage to dig in deeper and understand some complexities about the human brain at the single-cell level.”

Previous attempts to resolve differences in gene expression among neurons have been limited in scope by the small samples obtainable from fresh brains, and by the challenge of physically disentangling individual cells from one other. “All these neurons in the human adult brain, they’re highly, highly connected,” explained UCSD’s Kun Zhang, a bioengineer and collaborator on the National Institute of Health’s Single Cell Analysis Program (SCAP). “It’s very difficult to dissociate individual neurons from human brains.”

So Zhang and colleagues took a different approach. First, instead of using fresh brain slices, they chose to use postmortem neuronal tissue—in this case, from the brain of a deceased 51-year-old woman—thereby obtaining a far larger sample of cells than previous studies. They then implemented a pipeline using flow cytometry and antibodies for neuronal nuclear antigens (NeuN) to isolate neuronal nuclei in six of more than fifty “Brodmann areas”—distinct regions in the cerebral cortex with varying structures and functions.

By sequencing messenger RNA (mRNA) transcripts within these nuclei, the team generated 3,227 single-cell transcriptome datasets across the six regions: “more than an order of magnitude more than what’s been looked at previously,” Chun told The Scientist. Not only did these datasets identify cells as either inhibitory or excitatory (consistent with previous work in mice), they also revealed 16 distinct neuronal subtypes divided between these two categories that tended to be localized in one or a few Brodmann areas, indicating that the composition of neuronal types varies among regions of the brain.

“One of the major findings is that the composition in the visual cortex is very different from the other five areas that we sampled,” Zhang said, adding that further transcriptome differences were observable within subtypes as well as between them. “With these subtypes, we can start to ask, ‘What are the differences across these six brain areas, and do particular subtypes contribute to these differences?’”

For now, the team cannot conclusively identify how much of the variation in gene expression reflects genomic differences among neurons, since few current technologies permit simultaneous sequencing of mRNA and DNA from the same nucleus. “At this point, it’s simply a correlation,” Chun said. “But the changes are consistent with there being a genomic origin for these differences.” He added that the team is now working to improve the technology used in the pipeline to make the method more cost-effective.

Meanwhile, data generated by this and future analyses employing single-cell methods will provide an invaluable resource for studies of brain diseases, as well as comparative studies across age groups, populations, and species, said Andreas Tolias, a neuroscientist at Baylor College of Medicine in Houston, Texas, who was not involved in the work. “This is a very important step in the right direction,” he said of the current study. “It brings into the field the ability to do high-throughput, single-cell work in humans—it’s exciting.”

Tolias added that it will be important to expand the method to more brain regions, and to link transcriptome variation to differences in cell morphology, electrophysiology, and function. “The next step is trying to pull out some biology from the subtype classification,” agreed McConnell. “That’s the new frontier—to separate the biological variability from the technical variability. I think that’s where we’re going to be going next.”