ABOVE: modified from © ISTOCK.com, tera vector

Almost always, building something is harder than tearing it down. Similarly, knocking in genes poses a greater challenge than knocking them out. It’s a reality that researchers will have to overcome in order to get the most out of gene editing. Knocking in genes allows scientists to study the effects of specific gene variants, to use reporter genes like green fluorescent protein to track gene products in time and space, to probe genome regulation, and ultimately, to repair disease-causing genes. “It’s a really effective way to interrogate every base of a gene,” says Greg Findlay, an MD/PhD candidate at the University of Washington.

CRISPR-Cas9, a gene editing technology known for its user-friendliness, can knock genes in or out. Knocking out a gene involves inserting CRISPR-Cas9 into a cell using a guide RNA that targets the tool to the gene of interest....

To knock a gene in, however, the cuts must be repaired very precisely, with no extra insertions or deletions. This requires harnessing a second DNA repair mechanism called homology-directed repair (HDR), which—in mammalian cells, at least—occurs less efficiently, so its frequency is dwarfed by that of NHEJ. Complicating the process further is the fact that some gene loci and cell types are inherently less hospitable to CRISPR-Cas9 editing.

In the past few years, researchers have developed many new strategies to boost the efficiency of knocking in genes both large and small using CRISPR-Cas9, and along the way they’ve proposed and tested new applications for this type of gene editing. Here, The Scientist explores a few of the most promising approaches.

Project: In developing a gene tagging kit called Truetag that Thermo Fisher will put on the market later this year, Chesnut used selectable markers to improve
efficiency. A selectable marker—in this case, an antibiotic resistance gene—is stuck to a fluorescent protein tag and knocked into
mammalian cells. Those cells are then grown in culture with the associated antibiotic. The resistance gene confers a selective advantage to the cells that carry it; they alone are able to grow, and thus those that grow contain the gene tag of interest. Even if the efficiency of gene insertion is low, researchers can use antibiotic selection for a week or more to end up with a high percentage of cells with successful insertions.

Using the antibiotic puromycin or blasticidin with the kit, Chesnut’s team managed to boost the gene insertion rate from 10–30 percent to 90 percent or more in some cell populations. A few especially difficult genes went from an insertion rate of less than 1 percent to greater than 90 percent. It’s important to test multiple doses of antibiotics on the cell line you plan to use to find the correct dose, Chesnut says: you want to kill cells without insertions but not cells with successful insertions.

Try It: Selectable markers work best when the gene of interest is highly expressed, Chesnut says. “If it’s not, you may still get selection but you may not get enough expression of your fluorescent protein tag to be able to detect it.” Also, the general limitations of CRISPR-Cas9 apply. “There are regions of the genome that don’t cut very well with CRISPR, and we’re still not sure why,” he adds. And some cell types don’t easily accept foreign DNA, RNA, or RNA-protein complexes—the three methods of CRISPR-Cas9 delivery.

For better luck inserting selectable markers, make sure there is a so-called PAM [Protospacer Adjacent Motif] sequence, a short tag in the target DNA that CRISPR-Cas9 must recognize before it cuts, within 10 base pairs of the desired gene insertion site, says Chesnut. Farther away from the cut site than that, and the insertion efficiency may be too low to be functional. Without a PAM site, you can try TALENs or zinc finger nucleases, although those older gene editing techniques are trickier than CRISPR.

Project: Researchers don’t understand why the NHEJ pathway vastly outcompetes the HDR pathway in mammalian cells. “Yeast do HDR like crazy,” Corn says. In an effort to rev up this DNA repair process in human cells and improve gene knock-in control, he and his team are trying to pinpoint how HDR is regulated. They screened human cells for genes whose knockdown led to increased HDR in the cell, and then searched for small molecule inhibitors of those genes. One of the genes that popped up codes for CDC7, a kinase that regulates the cell cycle transition to S phase; its inhibitor, XL413, boosted gene knock-in efficiency two- or threefold (BioRXiv, DOI: 10.1101/500462, 2018). That’s because HDR occurs in only some parts of the cell cycle, including S phase, Corn says. If you add the inhibitor XL413 at the same time as you use CRISPR-Cas9 to edit your target gene, the cells pile up in the phase immediately before S phase. Then you remove XL413, and all the cells go into S phase and increase knock-in efficiency. 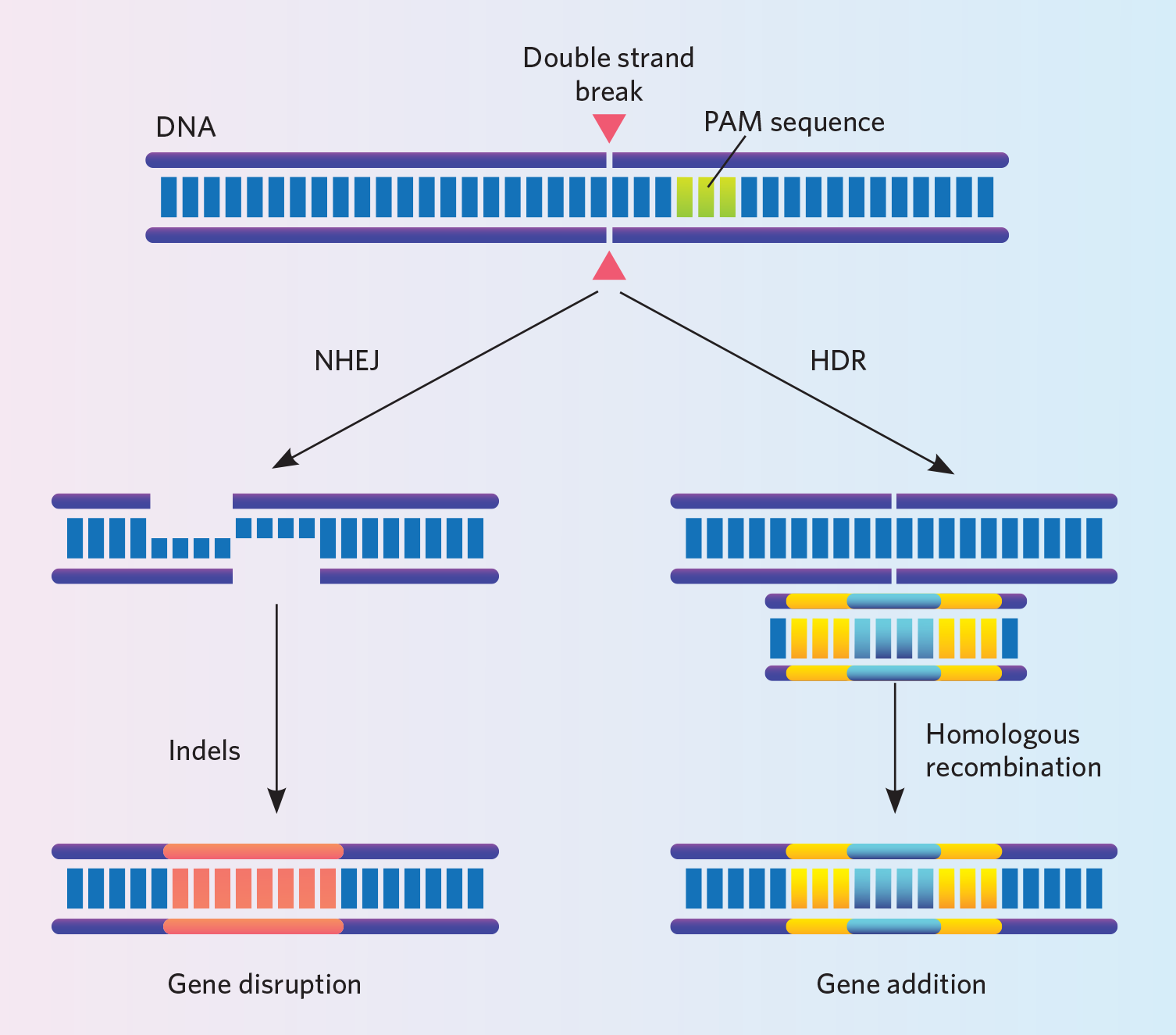 FIX IT: Non-homologous end joining (NHEJ), the main DNA repair mechanism in mammalian cells, simply joins the double-stranded DNA break back up, often inserting or deleting small stretches of DNA (indels) in the process. Homology-directed repair (HDR), on the other hand, inserts a new DNA segment that is surrounded by sequences that match the DNA on either side of the break site.
thE sCIENTIST STAFF

Corn has used this technique in many immortalized human cell lines and in human T cells. It can knock in short stretches of DNA, such as SNPs, as well as large genes. There is no reason it shouldn’t work in mice, he says, although he hasn’t tested it.

Try It: “Timing is absolutely key,” Corn says. The Cas9 must cut the DNA at the same time that XL413 is added. If you inhibit first and then release while editing with CRISPR-Cas9, homologous recombination efficiency drops threefold instead of increasing, because the cells are released into the wrong phase of the cell cycle.

And as with any HDR effort, Corn says, always run a no-nuclease control to make sure you aren’t accidentally amplifying contaminant DNA that’s floating around your lab. After introducing the knock-in, “sequence, sequence, sequence, sequence,” he says. Just using a reporter system such as a fluorescent protein tag to demonstrate successful gene insertion can backfire. Sequencing verifies that the insertions were made at the correct site.

Project: A few years ago, musing over the difficulty of knocking in genes while trying to do so into mouse zygotes, Gurumurthy and his colleagues had a revelation.

Researchers were successfully inserting short, single-stranded DNA, so why not try making a knock-in by inserting long, single-stranded DNA? Indeed, the approach, which Gurumurthy calls Easi-CRISPR (efficient additions with ssDNA inserts -CRISPR), boosts efficiency by 2.5 times, and using single-stranded DNA slashes the rate of off-target insertions 100-fold in cell culture (Nat Protoc 13:195–215, 2018; Nature 559:405–09, 2018). “It is quite huge,” he says. In Gurumurthy’s lab, Easi-CRISPR has generated a knock-in mouse line for 9 out of every 10 genes they have tried. A collaborator has also used it in human T cells to create CAR-T cells, patient-specific immune cells for fighting cancer.

Try It: Easi-CRISPR is far from foolproof, Gurumurthy cautions. Sometimes the technique inserts only part of the gene. Also, he adds, it can scramble the homology arms—the short sequences on either side of the gene that home it to its correct target in the genome. And some loci are inexplicably more difficult to insert than others.

Researchers unable to insert CRISPR into single-cell mouse embryos can pay a core facility to make the mice with their DNA sequence, says Gurumurthy. Core facilities such as his charge from $5,000–$15,000 to generate one or two breeding pairs; commercial facilities charge $20,000–$50,000, he says.

Project: Findlay and his colleagues were aiming to improve how clinicians interpret mutations in the breast and ovarian cancer gene BRCA1. That gene has thousands of variants, but researchers don’t know how most of them affect its function. To study the impact of these variants, they used a knock-in technique they developed called saturation genome editing (Nature, 562:217–22, 2018). 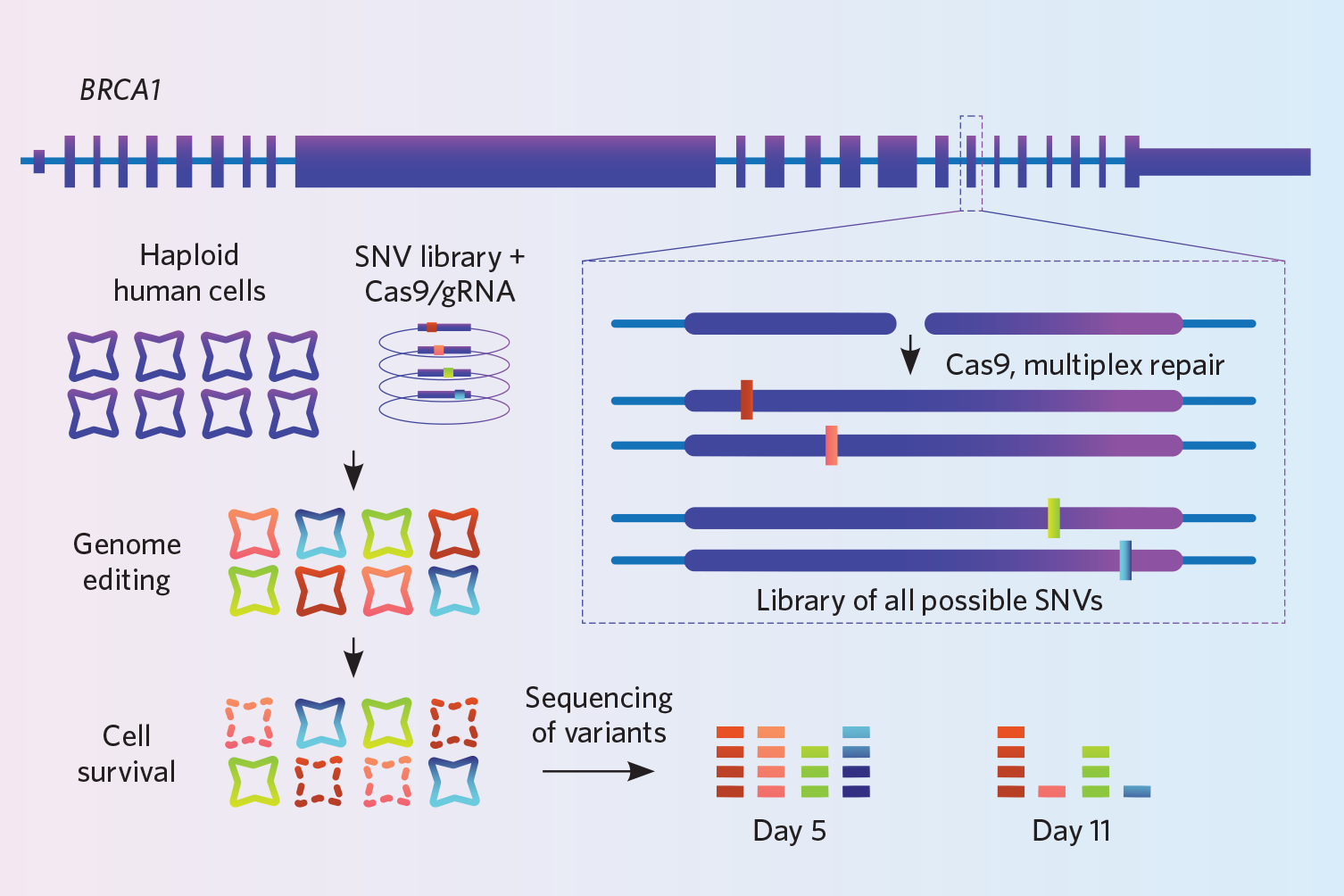 SEARCH FOR SURVIVORS: Researchers knocked in all 4,000 known single-nucleotide variants (SNVs) of the BRCA1 gene in millions of cultured cells. Then, they sequenced all the variants -- once five days after knocking them in, and again six days after that. They deduced that variants that disappeared on the second round of sequencing had interfered with the gene’s function, causing the cells that carried them to die.
adapted from AN ILLUSTRATION BY Greg Findlay

In an immortalized haploid human cell line, they used CRISPR-Cas9 to knock in 4,000 tiny variants in millions of cells at once in vitro. The genome is cut at the same spot in each cell, but each cell’s genome receives a different variant. To promote HDR, they also knocked out the ligase4 gene, disabling the NHEJ repair pathway—a step that yielded a threefold gain in efficiency, Findlay says. Finally, since all the cells’ knock-ins are different, they sequenced the cells deeply, covering the same genomic region millions of times, to make sure they actually knocked in the 4,000 variants they wanted to study. They sequenced at two time points, and deduced that the knock-ins that didn’t come up in the sequencing at the second time point were ones that interfered with the gene’s function, because the cells carrying them must have died.

Try It: Findlay’s team had the DNA oligos for the 4,000 variants manufactured for them on a microarray. You can buy arrays of 6,000 to 250,000 oligos, so consider getting more bang for your buck by combining multiple experiments on the same array, says Findlay. Their lab pays about $5,000 for 100,000 oligos.

This strategy comes with limitations: it has so far only been used to knock in single-nucleotide variants, and all the edits need to be in the same gene. The method works best when editing a fairly narrow region of DNA, about 110–120 base pairs, because longer DNA oligos would have too many errors, Findlay says. It’s also important to sequence very deeply to make sure that you account for the full number of variants you intended to knock in.