Eukaryotic cells’ contents are organized into various compartments, including membraneless organelles formed by a process known as liquid-liquid phase separation. Researchers have experimented with creating artificial versions of these compartments to control various aspects of cell biology—blocking particular cellular reactions, for example, or creating new sites for protein translation. Now, a team led by Matthew Good at the University of Pennsylvania Perelman School of Medicine has combined several recent advances into a technique for creating membraneless organelles that reversibly store and release specific intracellular cargo, letting researchers control cell behavior even more finely than before.

To make the organelles, Good’s team engineered yeast (and later human cells) to produce a tweaked version of a protein from the worm C. elegans that would spontaneously coalesce to form droplets, or condensates, in the cell cytoplasm. Then, to mark particular peptides as cargo for these artificial organelles, the researchers edited cells’ DNA to create versions of these peptides that possess a tag—that is, another protein that interacts with the ones making up the condensates. Observing the setup in vivo using fluorescent labeling and microscopy, the team found that up to 90 percent of tagged cargo proteins were sequestered into the droplets. 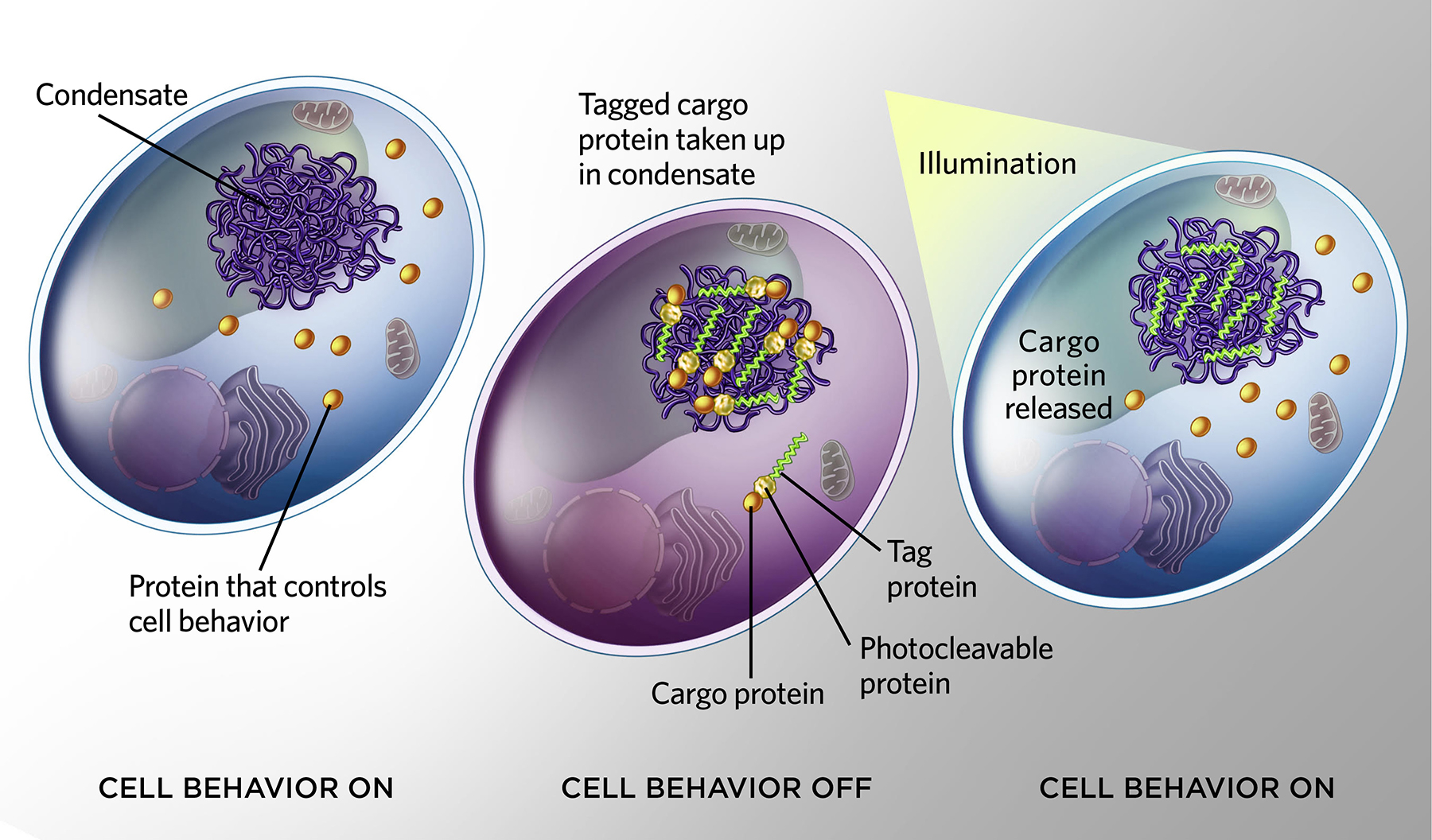 To reversibly sequester and release chosen cargo proteins, researchers engineer cells to produce a scaffold protein that forms condensates, or membraneless organelles, in the cell cytoplasm (panel 1). They then select a particular cellular protein as cargo (yellow) and genetically engineer it to be linked with a peptide tag (orange) that interacts with the scaffold protein. This causes the cargo to be sequestered inside the membraneless organelle (panel 2), thereby blocking whatever function the cargo protein had in the cytoplasm. In one version of the method, tested in yeast cells, the researchers engineered the tag to be linked to the cargo via a photocleavable protein (blue). Illuminating the cell caused the photocleavable protein to break down and the cargo protein to be released into the cytoplasm, rebooting cell behavior (panel 3).  WEB | PDF
© THOM GRAVES

Next, the researchers used the technique to control cell behavior. Tagging Cdc5, a protein required for cell division, so it would be taken up into the organelles stopped cells from proliferating, for example. The team also showed, using other cargo proteins, how the process could be reversed. Slightly heating the cells to break down the weak interactions between the condensate proteins and the tags caused the cargo to be released, restarting cell behavior. The researchers also engineered cells to produce a light-sensitive protein between the cargo and its tag that would be severed upon illumination, causing the cargo to be released from the droplet.

“They show that you can really affect cellular signaling” with this method, says Edward Lemke, a biophysical chemist at the Johannes Gutenberg University Mainz and IMB Mainz in Germany who was not involved in the work. “You can change cellular outputs and complex cell function by either concentrating [a particular factor] into a corner or letting it go from the corner [of the cell]. . . . Just showing that this is possible, I think that is really cool.” He adds that it would be interesting to see the technique applied to controlling multiple cell fates by having more than one type of organelle and cargo at once. His group recently did something similar by creating different synthetic organelles, each of which acted as a site of protein translation in addition to the cytoplasm, to produce multiple versions of the same protein within a single cell.

Good says there could be various applications for this kind of real-time sequestering of intracellular material of researchers’ choosing. “This platform can be deployed in a sort of an insulator mode,” as in this paper, to trap particular molecules, he says, but “it can also be deployed in a bioreactor mode . . . as a means of accelerating biochemical reactions of components that are localized to the organelle.” The researchers also want to see if they can use the approach to release particular biochemical factors sequentially—for example, as an intracellular alternative to current methods to reprogram stem cells. “What we’re starting to test is sequestering and releasing individual factors during the reprogramming process.”